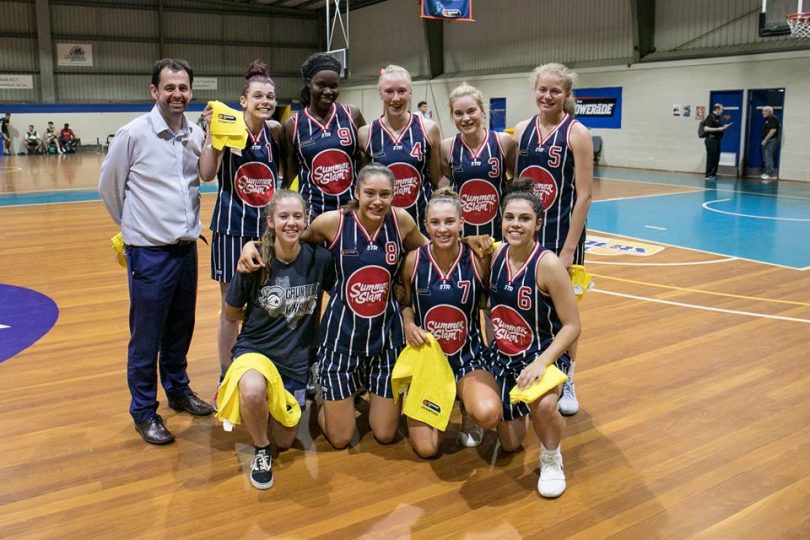 The Tropics, coached by Basketball ACT CEO, Michael Haynes, and led by star guard, Jazmin Shelley, were looking to bounce back from their first loss of the Slam the previous week against the ACT U20’s. The Spartans, led throughout the season by Centre of Excellence star Kobe Hawea, would have to do battle without their leading scorer, and with a squad of just five players healthy to suit up. A big game was therefore required by their second leading scorer, Taylor Mole and Canberra’s Molly McPhee.

The Tropics secured the lead mid way through the first quarter after a three-pointer from Ginninderra Rats junior, Sarah Cooper, and never looked back, pushing the lead to 14 points to end the first quarter, 26-12. The Spartans fought back in the second quarter, blasting a 16-9 scoring run to cut the lead to seven points behind eight points from McPhee.

But The Tropics quickly responded, running out to a 53-37 lead at halftime behind multiple three-pointers from Shelley.

Battling fatigue, the undermanned Spartans wouldn’t quit, stabilising the match at the end of the third with an 8-0 run. Heading into the final period, the Spartans had all the momentum, and were in complete control. With half of the final quarter remaining, the score was 76-73 in favour of the Tropics, and it was anybody’s game. However, a fifth foul to McPhee – who had been unstoppable under the hoop with 32 points – left the Spartans down to four players.

The match immediately turned in favour of The Tropics, who ended the 2017 Summer Slam season with 98-76, closing the game on a 22-3 run.

Congratulations to The Tropics on their Summer Slam Championship, and credit must be given to the Spartans for battling all the way to the end.