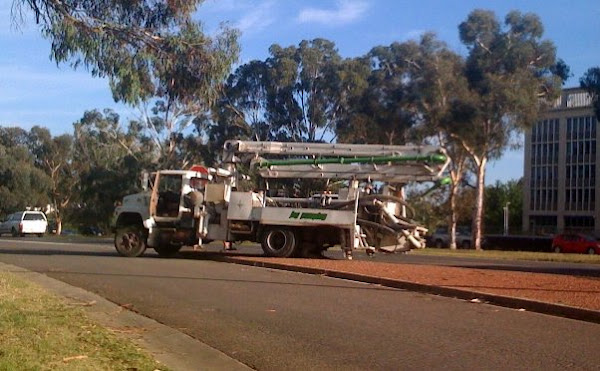 Phil has sent in this gem with the following note:

I snapped this about 7.45 this morning on Rond Pond roundabout… looks like he lost a whole axle ( I presume it was a dual). Nice dint in the trayside and very interesting skidmark on the road!

I think that you are one roundabout too early! Ronds Pond is not at Anzac Parade.
JW

You absolutely sure about that?

I think that you are one roundabout too early! Ronds Pond is not at Anzac Parade.
JW

I drove past on the opposite side a fair bit earlier, would have been closer to 6:45. There was an axle leaning against a tree near the road. I thought that was a little odd and looked over to see that truck on the island.

skid marks in the cabin too

Pass it for rego? Isn’t that just paying money every year after it’s been initially registered?

Or are trucks better monitored?

They have to go over the pits every two years depending on their build date. In that time they could possibly do 300,000km. This one would not have though being a concrete pump.

It is a 70’s Ford Louisville with a massive amount of weight over the rear axles, thsi vehicle will need to run on an over dimensions permit which can allow them to run higher axle loads. Screwing around on building sites causes axcessive wear even without the extra loads imposed by the pump.

I would say matal fatigue would be the issue which may have not been immediately noticeable at the last inspection, more of a maintinence issue really. Having said that, catastrophic failures such as this can happen with no warnings.

Pass it for rego? Isn’t that just paying money every year after it’s been initially registered?

Or are trucks better monitored?

It would be interesting to find out who passed it for rego. That appears to be a major fail.

It must have been a lazy axle (truckie joke) ha ha

Capital Retro - 3 hours ago
A decision made by people who have never used Centrelink's services and who will never have to. View
JS9 - 4 hours ago
To be fair, the ones primarily promoting densification int his case (ACT Gov) have zero to do with the decision to move Centr... View
Lifestyle 33

jorie1 - 6 hours ago
Are you sure that it is current renters buying properties? The research I have read shows that many people who rent will do s... View
jorie1 - 7 hours ago
Hi Assiduous, I do agree that $500 per week is a lot of money - but the majority of that money goes to the ACT government in... View
assiduous - 7 hours ago
$500 per week is not low - it is enough to build a modest detached family home every 10 years. It is a reflection of Australi... View
show more show less
*Results are based on activity within last 7 days