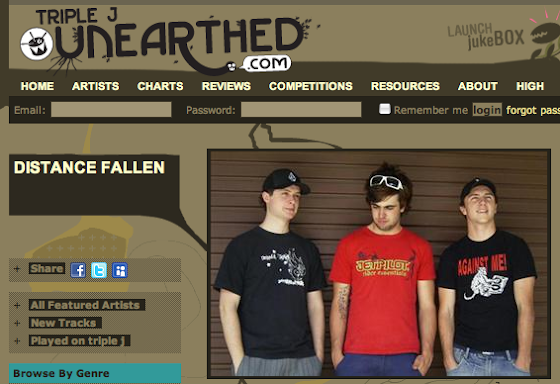 There are nearly 700 Canberra bands with tracks on the TripleJunearthed website. In 2011 we’re going to explore them.

First off the rank, selected at random with my trusty THAC0 iphone app, is Distance Fallen who describe themselves thusly:

In the quiet suburbs of Canberra, a desperate, honest and exciting sound is emerging. Distance Fallen, after months of writing, rewriting and rehearsals are ready to unleash their brand of acoustic punk rock upon unsuspecting listeners Australia-wide. Comprising of just three members, Kevin Stewart on vocals and guitar, Matthew Dennis playing bass and backup vocals and Sean Ford on drums and percussion, they each bring different influences to the Distance Fallen sound. “We’ve all been influenced by a range of artists from a range of eras” Stewart says, “from Against Me! to Crowded House, Propagandhi to early jazz”. From these influences Distance Fallen have come up with a range of punk inspired acoustic tracks infused with their own chilled-out, laid-back style. Currently in the recording process for their debut EP, Distance Fallen are planning to have their first full length released by mid 2008. Stewart says that these will both be produced and distributed independently. “We’re all really into the DIY ethic, we just want the opportunity to show ourselves the way we are and the way we would like to be”.

They’ve only got two tracks up on the site, and this 37 generalist old will admit that both “sounds like” and “influences” were a mystery. Such is the price of being really into a scene.

The vocals in the recording are a bit on the muddy side. Which is a shame because there are some reasonably poignant lyrics going on here.

While City Lights is a moody sort of rock song the chorus breaks out into a genuine toe-tapper, and the jangling guitars are good value.

With a genuine modern punk sound (more Blink182 than Sex Pistols) I suspect this song is an enditement of housing affordability in Canberra and the plight of the youth who survive by couch surfing.

Recording quality lets down what are two pretty worthwhile songs, but doesn’t make them unlistenable.

Don’t be put off by the punk rock tag. Both songs (if produced and mastered) could be played on commercial radio (and would be a great improvement over vocoded top 40 offerings).

If you like your music moody then it’s well worth a listen.

Thumper said “They’re a local band. That should be enough to support them.”

I agree, I love live music and supporting local talent. My point in earlier post was, that support should go to current bands/acts. They’ve broken up (according to myspace). If we’re going to support local talent, the efforts would be best placed supporting bands and acts that are still together, i.e. that RiotACT members could actually go and support and see live.

Gospeedygo said: “I really don’t think the acoustic guitar works for this band.”
I agree. Not loud & angry enough to be PUNK.
I listened to both songs…plenty of potential, but the acoustic angle doesn’t work for me.

Thanks JB, I look forward to this series playing out!

They’re a local band. That should be enough to support them.

Well without unearthed providing more dating information it’s going to have to remain a random sample of local talent as presented on unearthed.

But if you’re current then email loadedog@gmail.com for a spot in the Insatiable Banalities podcast. http://the-riotact.com/category/podcasts/insban

If the purpose of the exercise is to promote local Canberra bands, the fact that previous entrants are not culled is quite relevant I think. These bands may either not exist any longer, may have relocated, contracts overseas etc. It seems that the practice of not culling entrants may be designed to make it appear that we have more talent in Canberra than we in fact do, but it doesn’t help the current group of newly emerging artists to get noticed amongst the remnants of bands past. Still, at least it is a forum and an opportunity.

I might a have a thorough look see at this list of bands. I need some new music to listen to.

Now to put on my bad rock journalist hat:

I really don’t think the acoustic guitar works for this band. If the drums lack punch and the bass lacks punch, where is the punch going to come from? An investment in a strat and a fuzz box would work for some acoustic like jangle and then some power.

One would hope this is just a rough, rough demo, especially given the boast of “….says that these will both be produced and distributed independently.”

It’s not necessarily my kind of music but I can see how this could appeal to the kiddies.

Why yes, I am aware of that. It just doesn’t have any bearing on the exercise.

quoting from their blurb on this site: “Distance Fallen are planning to have their first full length released by mid 2008.”

JB – do you realise JJJ don’t cull previous years entrants? I know someone who entered about 4 years ago and is still listed? They might not even be together anymore….

I wonder if the guy in the middle has a commodore ute with a sticker similar to his t-shirt?

If you review Double J, you’ll be reviewing a canberra band that reads RiotACT!

Good Work Johnboy. There are tons of great Canberra bands out there, and more we can do to raise their profiles the better.

Linda Stapleton - 2 minutes ago
well I am sorry but I think Liberal party may be a tad out of touch...I refer you back to a certain individuals comment about... View
Jim Jim - 2 minutes ago
Beck Bianco you don’t read Riot Act much do you? This is the first criticism I’ve seen of local Labor. Balance is needed... View
Brenton Higgins - 4 minutes ago
Divisive attack ad? By talking about success like marriage equality? A fair and equitable Canberra? Gees cobber if you think... View
News 2

Tara Murray - 20 minutes ago
Jason Livingstone not to mention the cull after that which in my opinion wasn’t necessary... View
Jason Livingstone - 2 hours ago
What was the number of wildlife lost due to the fires? 2020 has not been good to wildlife.... View
Business 2

Lin Van Oevelen - 2 hours ago
Kevin Hodder It has long been known that the infection fatality rate is significantly lower than the case fatality rate. Late... View
Darron Marks - 3 hours ago
And how many people can go and get this blood test ? I would personally like to know if I have any antibodies for it ?... View
Kevin Hodder - 4 hours ago
That just lowers death rate percent way more!!! proving the virus isn't as bad as it's made out to be View
ACT Election 5

Liv Ruth - 4 hours ago
Hi Jim Jim, if that is Covid debate you are talking about, this should be applied against everyone’s next rates invoice in... View
Food & Wine 4

Lina Haines - 4 hours ago
Beth Sheargold is like a review of Clementine Bakery please! View
Donna Butler - 6 hours ago
Lizzy Edwards and a catch up with meeeeee View
Property 14

Nicole Vassallo - 5 hours ago
Laura yes exactly!! Lovely family that owns and built this place, and such a stunning home... 😍 View
Laura Peppas - 5 hours ago
Nicole your neighbours? 😱😍... View
News 2

Alison Gerrard - 7 hours ago
As kids, we first saw Susan Ryan in the 70s talking from a podium in Garema Place. Passionate about anti discrimination and e... View
Property 34

Martin Miller - 13 hours ago
Elroy Jones developers aren't providing it so what's the government doing? Oh light rail will transform the area? Have to say... View
Elroy Jones - 13 hours ago
Martin Miller do you think those things just arrive by themselves? View
show more show less
*Results are based on activity within last 7 days

The Spring Equinox passed this week and the days are now longer than the nights, but a polar blast of...
Food & Wine 30

@The_RiotACT @The_RiotACT
Multicultural candidates from across the political spectrum say they are being subjected to race hate during the ACT election campaign, despite the fact that they are Australians first and foremost https://t.co/HaZX7hQYoB (58 minutes ago)

@The_RiotACT @The_RiotACT
The number of wildlife killed or injured by motor vehicles on ACT roads has plummeted according to data from the ACT Parks and Conservation Service. Michael Weaver explains why 2020 has been good for wildlife https://t.co/9ZS8lImseP (2 hours ago)

@The_RiotACT @The_RiotACT
An ACT Labor TV ad is smug, divisive politics that will have their own supporters squirming in their seats, says Ian Bushnell https://t.co/z5yiIXJ2L4 (4 hours ago)