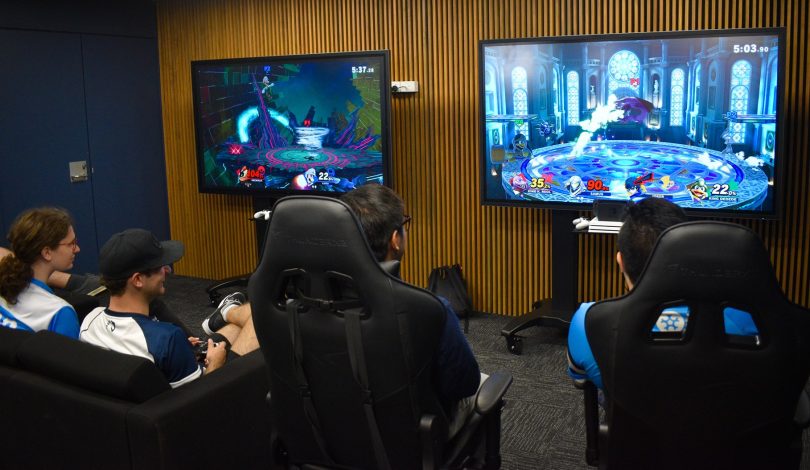 The growth of the world’s second-largest spectator sport has found its way to Canberra with the launch of the city’s only dedicated eSports lounge.

Just in case you haven’t logged on to the eSports phenomenon, it is best described as competitive video gaming where players join teams, are paid salaries, train and compete for tournament winnings in some of the world’s most popular video games.

These include team-based games like League of Legends, Overwatch, Rocket League, and Apex Legends, as well as individual games including Fortnite and PlayerUnknown’s Battlegrounds.

In 2019, more than $215 million was awarded in prizemoney across more than 4600 tournaments. The world’s highest prizemoney earner, Johan Sundstein, won $6.8 million last year.

The global eSports audience reached 453.8 million people last year, and on its current trajectory, the Global eSports Market Report estimates the market will generate revenue of US$1.8 billion in 2022.

For students at the University of Canberra, the eSports launch marks a new era in the higher education landscape.

The Bruce campus has more than 20 PCs and consoles such as XBOX, Nintendo Switch and Playstation loaded with the world’s most popular games.

The director of the University of Canberra Union (now known as UCX), Sarah Jennett, said the eSports lounge at UC will host national and international tournaments where players can compete against other universities and members of the wider gaming community.

“The UC eSports lounge has been developed to enhance the student experience at UC,” Ms Jennett said.

“For our students, it means a new and vibrant space to participate in individual and team eSports and a venue for eSports competitions including intervarsity.

“We are also looking forward to welcoming non-UC students to the space to further engage with our community.”

University of Canberra journalism graduate Saira Mueller is now an eSports reporter for Dot Esports in the US.

“If someone had said to me when I was at UC that I would be working in eSports and living in America, travelling to different locations to sit in a crowd of hundreds of thousands of people to watch gamers compete for millions of dollars, I would have thought you were crazy,” Ms Mueller said.

“But looking back I wouldn’t change a thing. I love working in this industry,” she said recently in an interview with UC.

“There are a lot of women that go to these competitive video game tournaments, and slowly there are more women joining the industry, so hopefully it continues to expand.”

The eSports lounge operates on a membership basis. A yearly membership will give members 10 hours of play, free access to all tournaments and events, free play on consoles and 50 per cent off additional hours.

Tim Gardner - 4 hours ago
Agents are not being fair in this current market, I know of 2 sales in 2 weeks that the asking price was accepted, then the a... View
James Watt - 6 hours ago
Joel Suryawanshi if you were selling your house, wouldn’t you want your agent to maximise your sale price? Not sure why the... View
News 1

consumeradvocatecanberra - 4 hours ago
I am a Vietnam Vet and spent 40 years in Defence. I try to keep abreast of the mumbo jumbo that is coming from the Government... View
TimboinOz - 7 hours ago
Long overdue. It's NOT just the fallen. It's also the ones who come back, permanently damaged. There are way more of them tha... View
Community 2

@The_RiotACT @The_RiotACT
As the winter chill descends, Canberrans are donning their traditional winter garb. But our weekly poll asks if it's a flannie, a flanno - or a booner doona? https://t.co/JemNWfUBre (52 minutes ago)