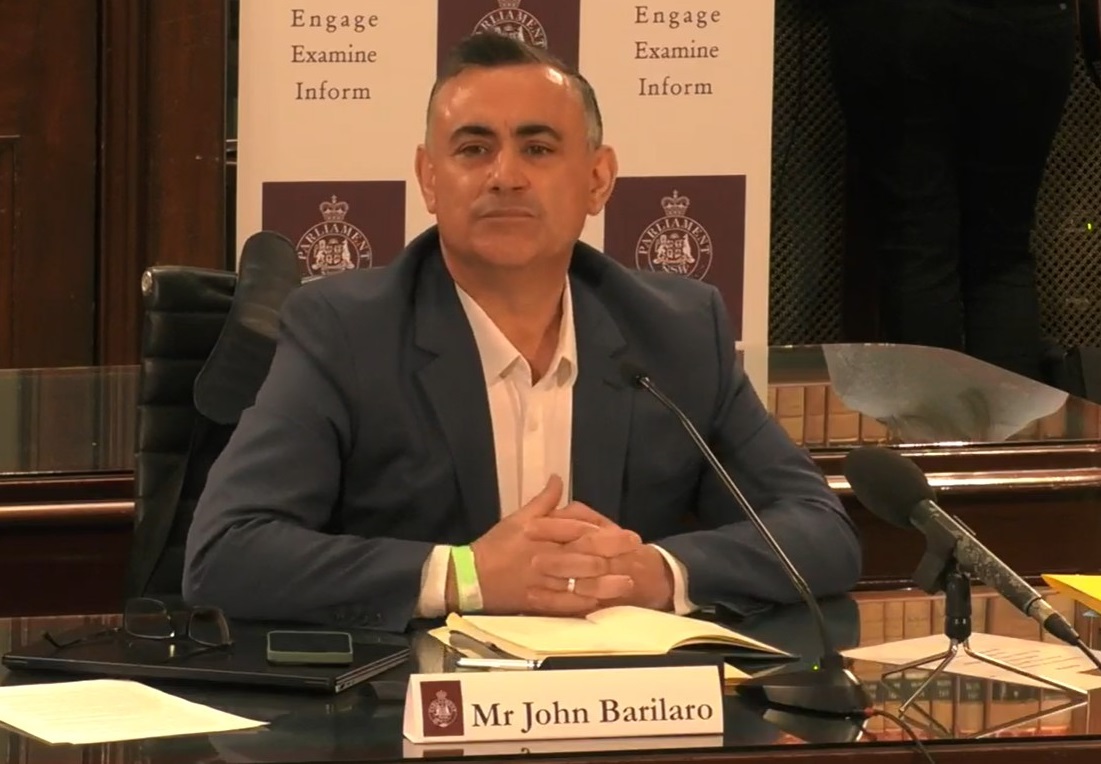 Former NSW Deputy Premier and Monaro MP John Barilaro described himself as the “unluckiest man in NSW” as he faced a parliamentary inquiry into how he received a plum trade role on Monday (8 August).

The Opposition has raised suspicions around the timeline relating to the Senior Trade and Investment Commissioner (STIC) to the Americas role, Mr Barilaro’s submission to Cabinet to make the trade jobs ministerial appointments, and his resignation from the Ministry.

Shadow Treasurer and committee member Daniel Mookhey outlined that Mr Barilaro had asked his staff to prepare a Cabinet submission to change the STIC roles from public service to ministerial appointments on 16 September 2021 and then said in a court hearing for his defamation case he was going to retire from politics on 24 September.

From there, his Cabinet submission was passed on 27 September, former Premier Gladys Berejiklian resigned on 1 October, and was followed by Mr Barilaro on 3 October.

He called the timeline a “series of coincidences” and “bad timing”.

“I’m the unluckiest man in NSW, I’d argue, because of those series of events,” Mr Barilaro said.

“I originally wanted to leave [politics] in June, but because of Delta, I couldn’t … the events of October 1 galvanised [me], [it was] an opportunity to resign.”

Mr Barilaro said it was “very public” that he wasn’t contesting the 2023 election and saw Ms Berejiklian’s resignation as a chance for him to also step aside for a “refresh of government”.

“If the events of Friday [1 October] didn’t occur, I would’ve stayed on for who knows how long,” he said.

“I had no intention, at that point, in applying for [a STIC role].”

When Mr Barilaro was pushed that he had made the Cabinet submission to change how the STIC roles were appointed for his own gain, Mr Barilaro said it was an “unfortunate timeline”.

“That’s the accusation you want to make because it fits your timeline,” he said.

“You’re making me out to be corrupt … I refute any allegation, accusation that I fast-tracked [the change of process] … so I could get the role.”

But Mr Barilaro refuted suggestions he’d asked Mr Ayres to act on his behalf to ensure he would end up securing the role.

“I had no role in seeking any favour or special treatment in the process,” he said.

“I applied for a job fair and square.”

He also refuted claims made by his former chief of staff that he’d emerged from a meeting about the STIC roles saying, “this is the job for when I get the f*ck out of here“.

“I’ve checked my records the best I can … I never had any [such] meetings in April or May or June,” Mr Barilaro said.

“He’s got his timelines wrong. There were no meetings and he was likely on leave at the time.”

After speaking with his referees, the independent panel changed its view of Mr Barilaro’s suitability for the role. Today it was revealed his references were Department Regional NSW Secretary Gary Barnes, US Ambassador Arthur Sinodinos and former NSW Premier Barry O’Farrell, whom Mr Barilaro described as a “dear friend”.

Mr Barilaro said while he may not have had the same qualifications as some of the other candidates, he applied because he saw it as a chance to “sell NSW in a way we’d never sold it before”.

“I had the capability to be a great salesman for this great state,” he said.

Now he regretted ever applying for the position.

“If I knew what I know now, I wish I had never applied … I wouldn’t have walked into a sh*tshow,” Mr Barilaro said.

“If you’d lived the hell I’ve lived in the past six to seven weeks, I’m the unluckiest man.

“What did I do wrong? I got offered a job; I accepted a job.” 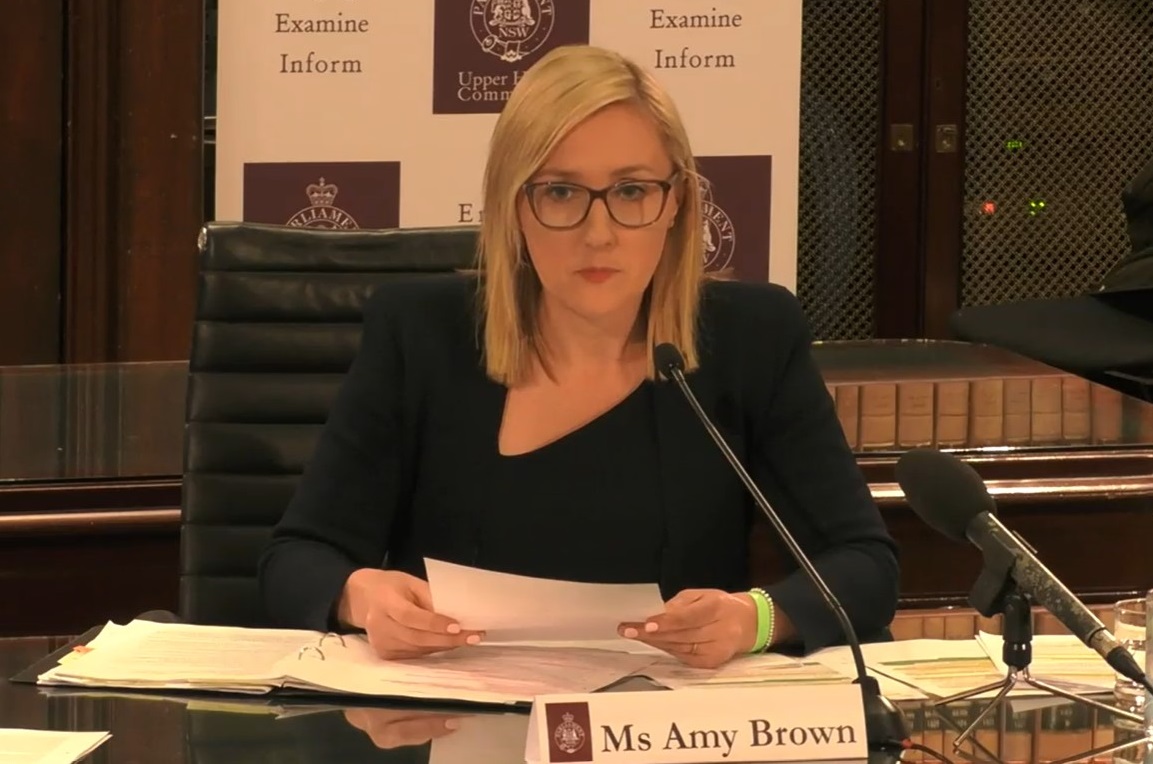 Mr Barilaro is scheduled to front the inquiry again this Friday (12 August). It foreshadowed that he’ll be asked questions about his relationship with his former senior media advisor, Jennifer Lugsdin.

Ms Lugsdin was contracted to Investment NSW when discussions were underway about re-advertising the STIC Americas role.

Investment NSW CEO Amy Brown fronted the inquiry for a third time today where she was shown an email chain about the draft media release for the advertising of the STIC Americas and China roles.

One of the people included on the chain, dated 10 December, was Ms Lugsdin. The position was re-advertised on 17 December.

Ms Brown said, in hindsight, she would not have offered Mr Barilaro the STIC Americas contract, but she claimed she had been under pressure to conclude negotiations so that the position could be announced by 17 June 2022.

That was despite some panel members not signing off on the appointment.

“It was an error to offer Mr Barilaro’s job … before the final report was signed,” she said.

“I should have resisted such pressure and waited.”

Ms Brown said Minister Ayres had been “keen” for the roles to be advertised before the end of 2021.

However, she insisted while the process was flawed, it was fair.

Recent revelations have also caused Labor to seek to expand the terms of reference of the inquiry to include all STIC appointments, particularly the UK role.

While Premier Perrottet has already declined to appear before the inquiry, Legislative Council Opposition Leader Penny Sharpe urged him to provide more information about what exactly was discussed.

“This is a very serious matter, the idea that the Premier of NSW was discussing with one of his ministers the opportunity for him to go to London as some sort of consolation prize for perhaps being dumped from the Ministry,” she said.

“[It] is a very serious allegation and it flies in the face of everything the Premier has said for the last seven weeks, that these are arm’s length positions, that they’re public service appointments that have absolutely nothing to do with him.”

Premier Perrottet has rejected these claims.

“The allegations in relation to the creation of a role that I would give somebody outside of politics is completely false and offensive,” he said.

“I’ll have colleagues speak with me from time to time about what roles they could play in the NSW Parliament to continue to serve the people of NSW. They’re natural conversations that a Premier or Prime Minister has with their team.”

Labor Leader Chris Minns has announced he would abolish the STIC positions if his party won the upcoming state election.

He said the inquiry had raised “serious questions” about whether the multi-million dollar taxpayer-funded positions had delivered “value for money”.

Shadow Trade Minister Anoulack Chanthivong said it couldn’t be established how much trade or investment could be attributed to the “grandiose senior trade roles”.

“The government’s senior trade roles have been mired in scandal, not only about who is being appointed to these roles and how, but also the overseas activities at taxpayers’ expense,” he said.

Only a politician totally removed from ordinary people’s lives, and with an overblown sense of entitlement, could self-pitying declare himself “the unluckiest man in NSW.” Grow up John!

Poor John! Thinking about himself and himself only. There’s alot of unsavouriness swirling around John and it is only going to get worse as he continues to dig himself a bigger hole. Yep it’s everyone for themselves now with this ICAC inquiry. I can’t wait to hear what Gladys had to say!! I also can’t wait for Friday’s hearing. I’ve got the popcorn ready!

In 1983 the Hawke government appointed ex Labor PM Gough Whitlam as Australian Ambassador to UNESCO in Paris. Margaret and Gough moved to Paris where they lived in the Australian Embassy complex designed by Harry Seidler, which had been commissioned by the Whitlam government.

Anyone see any parallels here?

Extraordinary. Not only did Whitlam in 1973 organise a suitable building for himself to be built in Paris but he also foresaw that Hawke would win government in time to put Gough and Margaret into it ten years later, in 1983. Compare that marvellous foresight with Barilaro who could barely organise a put-up job with existing furniture in a few months.

I see the inference you are trying to draw, CR, that ALP governments plan better for the longer term.

Undisputedly the best effort of alchemy and transmutation I have ever seen.

It’s a bit challenging trying to imagine parallels between the late Great Gough Whitlam and the diminutive John Barilaro from li’l ol’ queanbeyan! The UNESCO role was offered to Sir John Kerr back in 1977 by Malcolm Fraser, possibly for services rendered. The public backlash as a result forced Fraser to withdraw that offer!

No – Had a majority of the people of Australia had some minimum political wisdom, Gough might have still been Prime MInister. And could have reasobaly expected to be so.

Except for the conspiracy by Fraser, G-G Kerr and two Justices of the High Court (Mason J drew up the Letter of Dismissal that Kerr handed to Whitlam).

If he were still PM now he would have to be alive (maybe not). He died in 2014 but you “maintain the rage” people have probably canonized him already.

I meant were Gough still Prime Minister in 1983 – clearer now ?

The tense I used was the past tense – not your present tense.

That’s ok Peter I knew what you were talking about. How about this for a blast from the past! These past 10 years of Conservative govt I miss him so much
https://m.youtube.com/watch?v=6Hx8S7TJm9s

Thanks for the reference. “Release the Palace Letters” show how correct Keating was on Kerr.

Well, OK but for a moment I thought you were trying to “outspin” the great phdyeaux.

Yep an appointment made a decade later by a completely different administration is exactly the same as this case…… your argument is as desperate as that of the protagonist in all of this.

But hey as long as they pretend to be ‘conservative’ that’s all you need hey? Nothing to see here…… yawn.