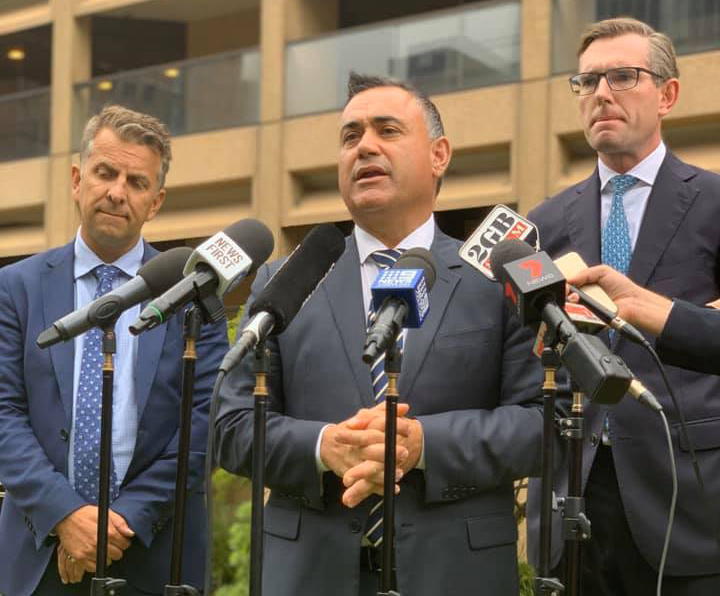 John Barilaro (middle) may have resigned from politics, but questions around how he received a top international trade job have attracted intense scrutiny. Photo: File.

New documents released to an inquiry into how John Barilaro received a top international trade job suggest reports were altered to ensure the former Deputy Premier received the position.

A draft selection report for the Senior Trade and Investment Commissioner (STIC) to the Americas showed the independent panel had concerns about Mr Barilaro’s suitability for the role.

“The Panel came to the view that John did have some of the relevant capabilities and experience for the role,” the draft report said.

“However, he had not worked internationally in a role aligned to the experience expected for the high-level STIC candidates.

“He would need to build a team without the business or departmental structure he had previously. His lack of business development networks would mean that he would have a considerable learning curve in the role.”

However, this criticism was changed in the final report to read: “While he would have a learning curve on doing business in the US, he had a strong track record of building teams as well as operating in a dynamic environment and had a deep understanding of the NSW Trade and Investment environment.”

It was said this decision had been made after a review of Mr Barilaro’s references, which included the Australian Ambassador to the US.

NSW Shadow Treasurer Daniel Mookhey today (1 August) questioned why it appeared Mr Barilaro had been exempt from the same process his unnamed top opponent for the position had been subjected to.

“His criticisms are deleted and the praise is elevated and we need to know why,” he said.

“It’s unheard of that you would change a selection panel report, and it certainly leaves the impression the report was retrospectively changed to justify the decision to hire John Barilaro.

“What this document makes clear is a person who we know to be Kimberley Cole beat John Barilaro on all the key criteria.

“What becomes even more extraordinary is John Barilaro signs his contract around the 8th of June, and then on the week after his ratings are upgraded and his main rival’s ratings are downgraded.”

Mr Mookhey also ridiculed claims from now Deputy Premier Stuart Ayres that he had been removed from the selection process.

A released email showed Mr Ayres had been involved in deciding the shortlist for the candidates, with two candidates then to be “submitted for his consideration”.

“Stuart Ayres had his fingerprints all over this,” Mr Mookhey said.

“There are now five clear occasions of Stuart Ayres telling the public one thing but the evidence saying something completely different.”

It followed a social media post from Mr Ayres last night (31 July) in which he outlined the decision-making process for the STIC Americas position.

“The selections of our Senior Trade and Investment Commissioners (STICs) appointed in India, Japan, Singapore and China were conducted in accordance with the GSEA [Government Sector Employment Act and Regulations],” he wrote.

“It was an independent, transparent and meritorious selection process and the same process was used for the STIC – Americas role.”

Opposition Leader Chris Minns said the fact that the NSW government had fought “tooth and nail” not to have the documents released contradicted Mr Ayres’ claims and found the “meritorious” comment the “most galling” of all.

“It flies directly in the face of the application made by Jenny West and others, who were eminently more qualified people with years of experience, didn’t get the position because we’re expected to believe a ‘meritorious’ process took place and John Barilaro was appointed to the position,” he said.

“Jenny West did not get this position for one reason: her name was not John Barilaro.”

Further documents were expected to be released in the next 24 hours.

Further hearings before the Public Accountability Committee are scheduled for Wednesday (3 August) and Friday (5 August) this week, and Monday (8 August) next week, with Mr Barilaro among those invited to appear before the inquiry.

Lining up a $500k a year overseas posting armed with nothing more than irrelevant cert IV’s obtained 20 years ago.

FriendlyJordies seems to be vindicated