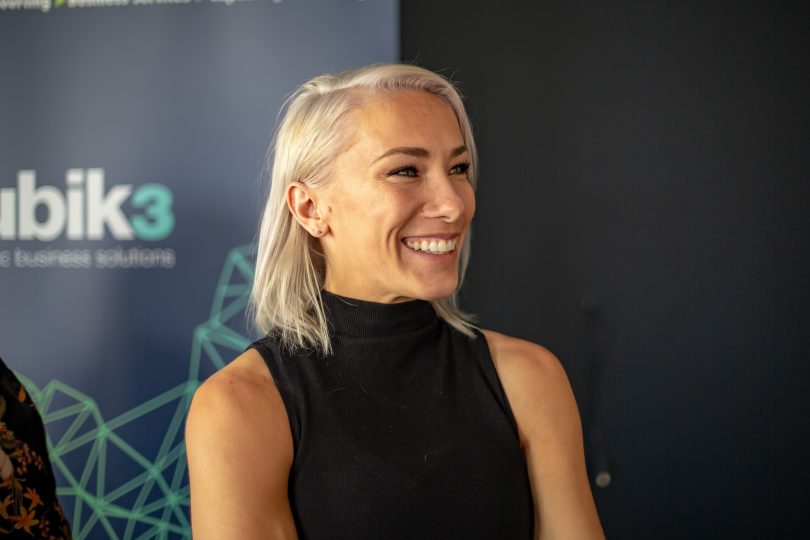 Eight times world champion in BMX and Mountain Bike, Caroline Buchanan says she had no intention of walking away from the bike despite a horrific run of injuries in the past 15 months.

As she delivers a shopping list of surgical procedures in the wake of an off-road accident late in 2017, talk of her injury toll is instantaneously overshadowed by her desire to get back into competition. She wants to be ready to qualify for next year’s Tokyo Olympics.

It’s fair to say the past year-and-a-half have been challenging, but it has also provided an opportunity for reflection and for Caroline to focus on other ethical initiatives. She has been writing children’s books, with her second titled Girls can be brave, about to be released. Then there is her range of balance bikes targeted at the two to five year age group. This is a young woman always on the move, both mentally and physically! 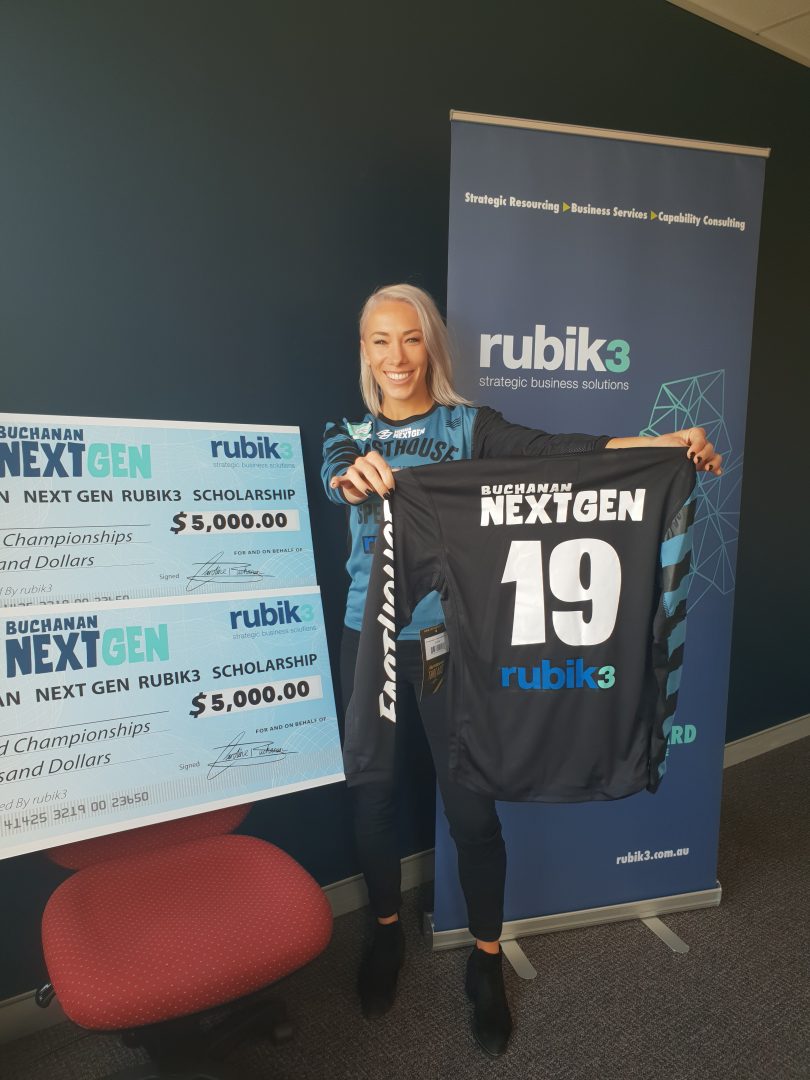 Caroline at the launch of the Next Gen Scholarship Program 2019. Photo: Nadia Pessarossi.

Caroline, it would appear, is just as passionate about helping others as she is about competing at the Olympics or World Championships. So much so, she has devoted much of her time off the bike to her “Next Gen” Scholarship program.

Next Gen helps young BMX riders achieve their goals by providing funding to compete at the World Championships. Inspired by the assistance she was offered as a 14-year-old by surfing champion Layne Beachley, Caroline has provided $73,000 in funding to 17 girls aged 14 to 15 years of age over the past five years.

Her drive to set up the scholarship fund in the first instance is just as inspiring. She sold her Olympic bike and World Championship jersey, combined with crowdfunding, to ensure there was financial support for young riders emerging in the sport.

This holistic philosophy aligns perfectly with the community approach adopted by Canberra business, Rubik3, which decreed this year as being the year of “Girls Can Too.” The high flying Canberra professional services consulting firm, with a proven commitment to backing community sport, has partnered with Caroline, giving her scholarship fund a $15,000 boost over the next three years.

Rubik3 Associate Partner, Nadia Pessarossi, is committed to linking business with community, and what better way to do that than through helping the next generation reach their goals? Nadia says, to put it simply, “We share the same values. All of us need mentors and Caroline is a champion to younger girls.” 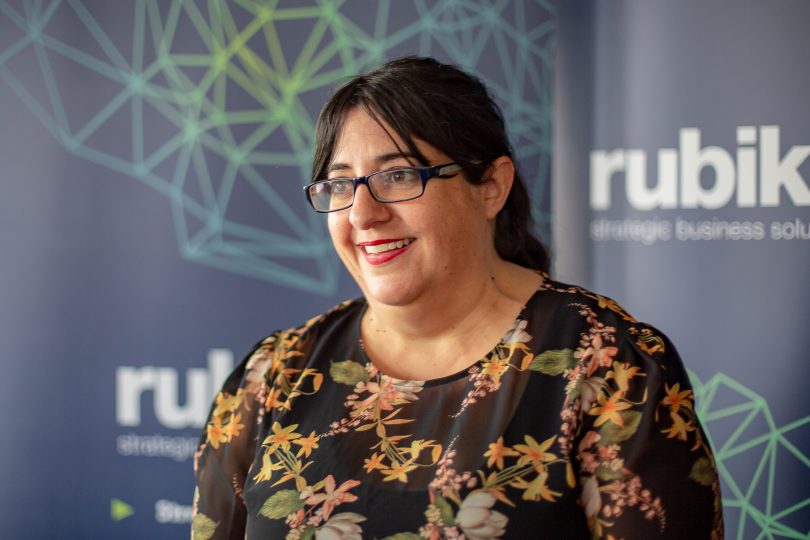 For 28-year-old Caroline, that value set will provide an inner mental strength as she builds towards a return to competition in time for the Olympic test event in Tokyo in mid-October. She hopes to be cleared to be back on her bike by 1 June, but she has to temper her expectations. She was hoping to qualify in two BMX disciplines, but the injuries have forced her to drop freestyle from her program.

Given what she has been through in the past 18 months, it would be foolish to doubt her ability to get back to the top in time for the 2020 Olympics. She is living proof that it takes a community to produce a champion.

Caroline Buchanan + Rubik3 supporting the next generation of sporting champs

Canberra legend Caroline Buchanan is as passionate about helping others as she is about competing at the next Olympics. She knows it’s a tough road to the top, and that’s why she devotes much of her time off the bike to her Buchanan Next Gen scholarship program. Thanks to the generosity of sponsors like Rubik3, young riders now have clear pathways to the world championships. Click to hear the sporting superstar and Rubik3's Nadia Pessarossi tell Genevieve Jacbos more about the program.

William Loughnan - 5 hours ago
Always some one has to whinge about some thing If people were speeding and doing other things around the streets of Goulburn... View
Patrick James - 7 hours ago
How long has Wakefield been there? How long has the whingers been there? These whingers move into an area then they expect ev... View
Cara Bush - 7 hours ago
The people who buy property close to the event locations don't realise that with building they are making the location enclos... View
Community 1

Alistair Rathbone - 5 hours ago
Like the cricket football and many other sports or hobbies there is always the rat bag element . The summernats event may be... View
Motoring 58

Di Marks - 6 hours ago
would like to know the figures on how many got covid from there... I know it would be alot View
Steve Chisholm - 9 hours ago
Craig I’ve been to about 20 SummerNats and thought this year’s event was pretty good. View
News 2

James Forge - 6 hours ago
Lee Gray Could that be why violent crime has increased? Is it Violent punishment for crimes otherwise unpunished? View
Property 21

JC - 6 hours ago
The chances of that are zero. Not just here but in the vast majority of new developments in all the capital cities and many l... View
Peter Jones - 8 hours ago
Probably from the massive Murrumbidgee river that runs down the side of development View
News 5

gooterz - 7 hours ago
Gum trees are one of the few trees that just shed limbs when it gets too dry. Without warnings they just come down. At least... View
rustylick - 8 hours ago
The reality is 30m trees shouldn’t be in a suburban setting. There needs to be a risk management approach that says with th... View
kenbehrens - 9 hours ago
There will be two types of people who will comment on this article; people like me who strongly oppose gum trees anywhere nea... View
News 59

Ania Lian - 7 hours ago
Hilarious. Great economy smart governments and what a coincidence with Covid View
Scott Abela - 7 hours ago
James Forge oh yes, I heard that China can get out LPG for something like 9c delivered... I can't get it right her in Aus for... View
James Forge - 7 hours ago
Thankfully there are still plenty of trucks on our roads that are too old to need AdBlue. View
Motoring 41

Frustrated - 8 hours ago
Drone delivery is not available across all of Canberra though. I know in my area of Tuggeranong, there are no drones allowed,... View
Sport 16

UPDATED: A man has died following a multi-vehicle crash on the Kings Highway, near Goulburn Rd, Mulloon. Monaro Police say a...
Opinion 134

When asked the age-old question of whether I am a cat person or a dog person, without any hesitation, I...
News 59

Serving bao to the inner north since their Dickson store opened in 2019, Superbao has arrived on the southside with...
News 37

I know it’s a generalisation, but many Canberra residents appear to have an uncomfortable relationship with anything to do with...
Opinion 138

At family dinner this past weekend, a relatively heated discussion occurred about whether or not it was appropriate to describe...
Opinion 134

Canberrans are frustrated with the state of the roads around town and the proliferation of potholes after months of wet...
Food & Wine 108

Before Christmas, I tried to be optimistic as the country, led by Prime Minister Scott Morrison and his NSW acolyte...
News 59

Shoppers might be contending with increasingly bare shelves as increasing numbers of workers find themselves in isolation due to COVID-19,...
Motoring 58

The smoke has cleared at Exhibition Park in Canberra (EPIC), marking the end of another Summernats. Summernats 34 had thousands...
Motoring 41

@the_riotact @The_RiotACT
Is it time to live and let live for @Summernats? Or does the annual #festival of rubber and smoke continue to infuriate you? Have your say in this week's #poll https://t.co/3JCFXsDvQu (6 hours ago)

@the_riotact @The_RiotACT
A new #restaurant and bar in #Curtin is bringing "pub classics with a European twist" to the local shops. Founder, owner and craftsman Sam Carlini says business is booming https://t.co/Ro9Gx0qs4j (8 hours ago)

@the_riotact @The_RiotACT
After the recent storms, some Belconnen residents said #eucalypts - often referred to as 'widowmakers' - shouldn't be in the #suburbs because they aren't #safe. But one arborist doesn't think that's a fair assessment https://t.co/n1p51QM8vh (10 hours ago)