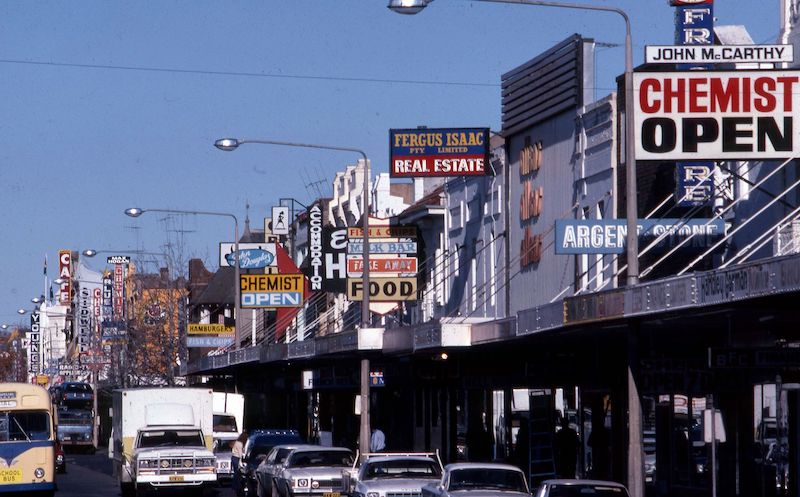 Aimed at travellers on the Hume Highway passing through Goulburn, Auburn Street’s neon signs once grew bigger, brighter and bolder. The number and variety of them on the town’s main street also rose – chemists Max Hogan, John Douglas and John McCarthy; hamburgers, fish and chips, and other takeaway food; electrical appliances and whitewoods retailers Sidwell’s, and Argent and Stone; and Young’s department store.

For years after the Hume Highway bypassed Goulburn in 1992, the old signs, for various reasons, defied attempts to take them down. Then a solution happened on sunrise one morning in the late 1990s, before traffic became busy.

Two determined businessmen standing in the bucket of a cherry picker, Neil Penning and John Guthrie, rose above the awnings to dismantle the obsolete signs. Today, a section along Auburn Street most noticeable for signage before the bypass, is beginning to look like a green oasis when viewed through the lens of author and photographer Leon Oberg.

Architect David Flannery captured the scene pictured above in 1982, a decade before the bypass, when he lived in Goulburn. He had worked for the NSW Government Architect in Sydney and Newcastle before arriving in Goulburn for 18 months.

He took slides to show an audience of international fellow students a history of architecture in the historic town.

“I have had a fascination with the life, culture and history of Goulburn ever since that time,” said Mr Flannery.

Carol James, a Goulburn Chamber of Commerce stalwart and now a member of Goulburn Mulwaree Council, recounts a letter writing campaign in the 1990s offering building owners removal of the old signage for no charge. The signs were a constant source of confusion, causing complaints from people coming into town for the first time and going to the wrong place to buy something. When the chamber resolved to act, the change began.

“It all happened fairly quickly,” said Ms James. “It saved the owners a lot of money.” 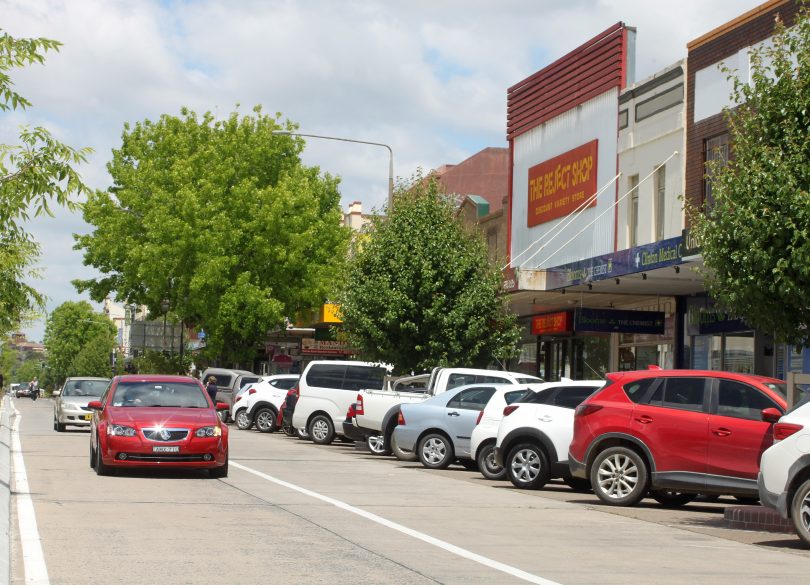 Mr Penning, an electrician, and Mr Guthrie, who ran a muffler replacement service with his brother, Gary, hired the cherry picker only after the chamber had worked through much rigmarole.

“The biggest challenge was getting permission from the buildings’ owners [who leased space to retailers],” said Mr Penning. “First, we had to find out who they were; the council wouldn’t reveal their names.”

With enough people onboard, he climbed into the bucket of a cherry picker with Mr Guthrie. They tried to make a start at different times of the day, but traffic was always a stumbling block. Finally, they found the quietest time was at dawn, just as the sun was coming up.

Mr Penning isolated the wiring, or terminated live wires connecting each of the neon signs.

John Guthrie has since moved on from Goulburn, but those who remember him will attest to his energy and determination.

“He had an oxy set [oxy-fuel welding and cutting set ] in the bucket with us,” said Mr Penning. “He blew the nuts and bolts [holding the heavy signs] to buggery.”

Hollingsworth Crane then hoisted the heavy signs clear of the awnings.

“We didn’t want to muck about,” said Mr Penning. “Time is money.”

The men, who each had separate and subsequent stints on the council, were keen to enhance the main street’s appearance, even though there was not consensus among all chamber members.

“We could see how ugly they were,” said Mr Penning. “Other people said they looked good, but recognised majority rules and agreed to the project.”

Mr Penning said traders’ signs competed with one another. “How do we get more business? A bigger sign, as simple as that, is what drove all this,” he said. 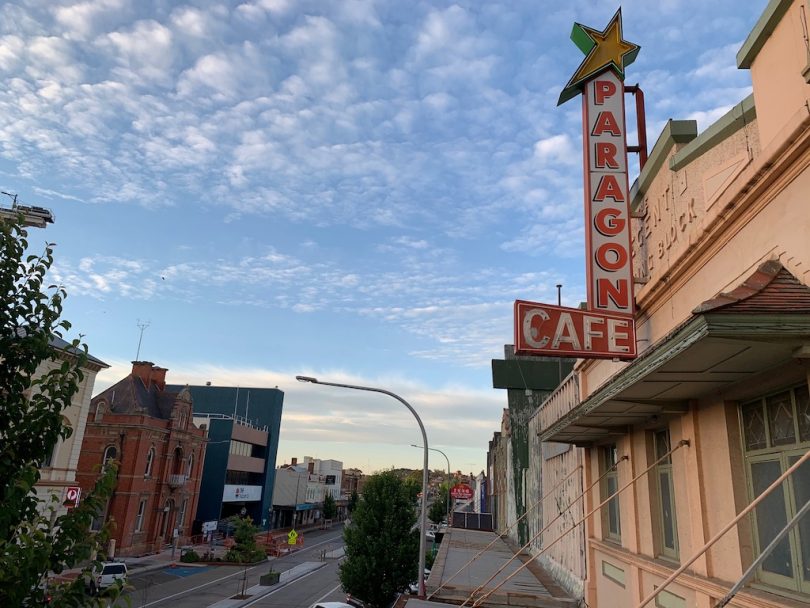 A few signs remain above awnings today, including Mr Penning’s favourite one. Stretching into the air beyond the top of the building it hangs from, the red-and-white Paragon Cafe sign is crowned with a yellow star.

He has repeatedly repaired the gas-filled glass during the years, running the gauntlet with traffic and working at height.

“I go through all the sections systematically finding what’s broken,” he said. “Some glass needs the gas replaced, while some sections are just broken.”

A 26-year veteran in the signage industry, Craig Maddren says signage above awnings in Auburn Street have long been banned. Any remaining signs are a leftover from the era before restrictions came into place.

He believes the last neon sign was installed down the Astor Hotel end of Auburn Street for a business, Metro, that has not operated out of the site for at least 15 years.

I recently saw a sign for a Vietnamese bakery some distance from the current one. I think it was the “Dalat Bakery”.

So it’s 28 years since I had to crawl through the main street of Goulburn in me Datsun 120Y , along with all those semi trailers.
How time flys.

The Paragon is an iconic landmark. I remember as a young child visiting the Paragon cafe on our trips through town back in the 50s and 60s. At the time it had large coloured stars on the ceiling, the same shape as the one on top of the neon sign.

Ben Stein how things have changed. I used to love my Friday night drives to Sydney when we would stop for a hamburger in Goulburn on the way up. Loved the neon signs.