US light rail feats give Steel confidence for Stage 2 challenges 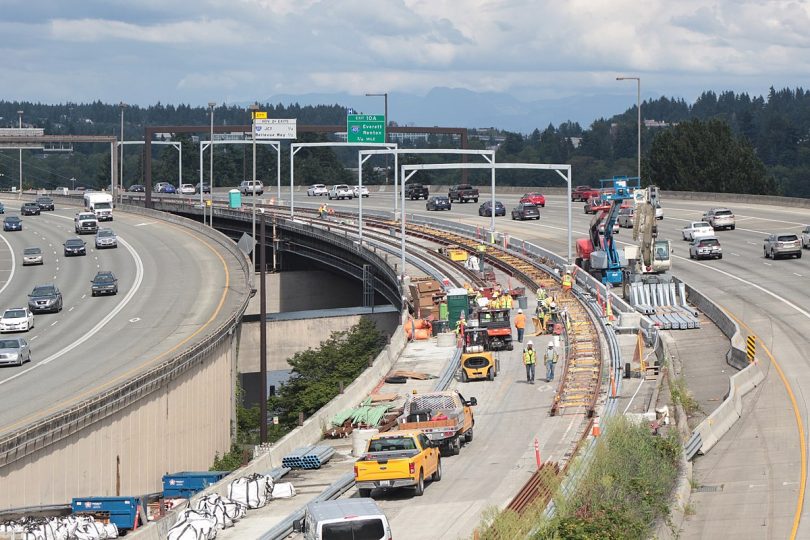 Construction in the median of Interstate 90 on the East Channel Bridge for Seattle’s East Link line. Photos: Wikipedia Commons.

The engineering and design challenges for Stage 2 of light rail pale in comparison with the scale and complexity of projects in the United States, according to Transport Minister Chris Steel.

Mr Steel is back from a 10-day study tour that took in light rail construction in western cities of the US, including Seattle where a new $54 billion line, including bus rapid transit to increase frequency on the existing network, is being built.

“I was overwhelmed by the scale of investment that some of the cities are making in light rail and also the complexity of light rail build,” he said.

In Seattle, the East Link line is under construction on the floating bridge across Lake Washington and is due to open in 2023. It will be the first time a floating bridge will take rail and is being called Seattle’s moon shot.

Many corridors were also being built on stilts and through tunnels. 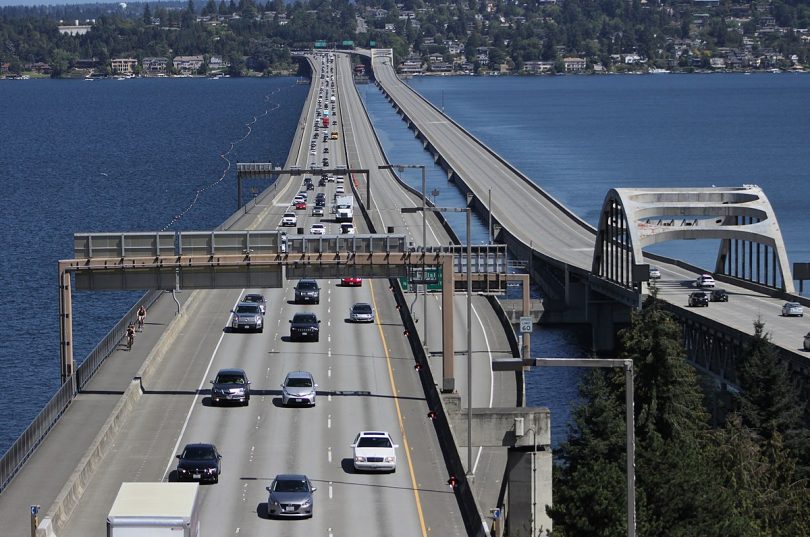 The two Interstate-90 floating bridges carry traffic from Seattle to the Eastside community of Mercer Island. The centre lanes will soon give way to East Link light rail.

Mr Steel observed stations in Seattle that went from overpasses down on to the median with escalators, offering a possible picture of how the challenge of getting people across Adelaide Avenue to a stop in the median might be solved.

“Existing overpasses could be utilised but whether it’s a lift or stairs or escalators, will need to be considered in the design,” he said.

Mr Steel said that there was a real focus on building communities supported by public transport with appropriate development around the stations.

“All of these cities are dealing with massive homelessness issues and problems with affordable housing and a lot of the transit-oriented development was about how can we use this as an opportunity to have more affordable housing close to public transport as well as building in public realm improvements and connectivity to the stops,” he said.

“That’s going to be a challenge for Stage 2 because there won’t be as many opportunities for transit-oriented development along the route but there certainly would be in Woden.”

Mr Steel said US light rail was being used as a mass commuter service in combination with buses, streetcars, and park and ride systems.

“It’s about seeing the integration of the network as a whole,” he said. 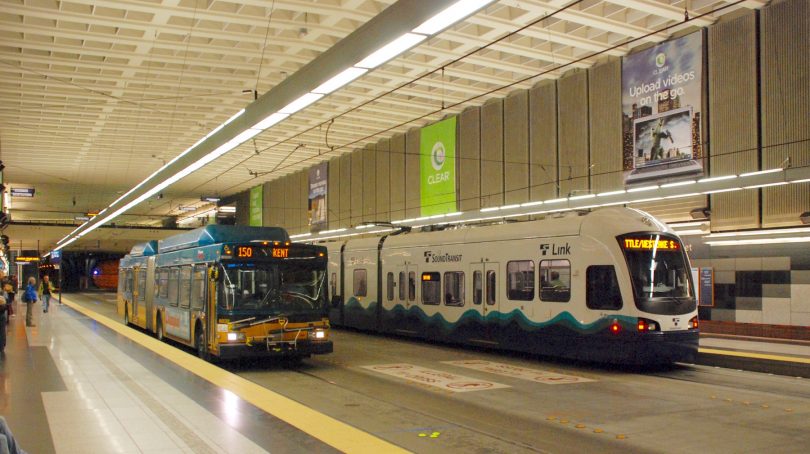 Bus and light rail together at University Street station of the Downtown Seattle Transit Tunnel.

The government is obsessed with light rail. Improving bus technology will enable the movement of large numbers of commuters more cost effectively than light rail.Light rail advocates get your heads out of the sand and consider real alternatives.

What were the busses carrying in a comparative period before the tram (not the tram novelty/freebie period)?

It is unfortunate Mr Steel’s junket did not include visits to cities with successful bus rapid transport. The failure reflects the limited and closed vision of the government of how Canberra could develop. What a sham and a shame.

Do you think that he is the only one in the current government who has been on a “light rail junket”?

The Euro ones are hard to beat. They really sell the sizzle – the steak is secondary.

An extra $54 BILLION. Hardly a challenge for Seattle or the ratepayers Of Canberra.

It is unfortunate Mr Steel’s junket did not include visits to cities with successful bus rapid transport. The failure reflects the limited and closed vision of the government of how Canberra could develop. What a sham the and a shame.

Yep,
I’m sure visiting a city that’s twice as big as Canberra with a population density nearly 7 times ours showed him exactly when a city might be able to justify a light rail system as a viable option.

It’s a shame that our politicians seem hell bent on saddling us with this monstrously expensive and unjustifiable largesse.

The opportunity costs of this clear folly will be felt for decades.

“All of these cities are dealing with massive homelessness issues and problems with affordable housing and a lot of the transit-oriented development was about how can we use this as an opportunity to have more affordable housing close to public transport as well as building in public realm improvements and connectivity to the stops,” he said.

There really is no end to the tram spruiking – now we’re to believe that it will be a solution to homelessness and unaffordable housing.

There’d be more chance of real and enduring responses to those problems if we had a government less addicted to big spending (not least on trophy projects) funded by property-related revenue gouging.

I wouldn’t want our bridges to look like any of these.

In the meantime, life goes on in Melbourne, The Gold Coast, Adelaide, Helsinki, Phoenix … …. . Canberra should have had north south light rail – with buses criss crossing the lines into the suburbs – for decades.

The US version of light rail is a bit heavier than the European version that we use here in australia and have used on stage 1 in Canberra. Hope the Minister has noticed this.

The European version is actually ideal for Gungahlin (and maybe Belconnen) where the load is collected en-route but for Woden and beyond to Tuggeranong the heavier more express version is what is required with plenty of room for park and ride stops.

I’ve said it many times any extension to the current line over the lake should be towards the triangle and eastwards Kingston.

Indeed there is but there will be millions lost as well. There is heavy unit discounting happening now. It’s ridiculous to say the tram is “successful” too as there is no precedent to measure the perceived success against.

Aaahhh.. the haters be hating. It’s so Canberra.

My commiserations to all my taxpaying friends @ family in Canberra!!!!! None of who ever have or will use these public white elephants!!!! ACT GOV you cease to amaze yet again!!!!

Yep, white elephant; no-one’s using the light rail. They run empty. I must have been dreaming when I used it and saw how many other people were using it. I don’t live near the light rail, but it’s a great service and I am pleased for those who can get the benefit regularly. I wish I had the light rail near me.

Tony Webber I live near the city and I can assure there are many many people queued up waiting for it. It’s a success, and why wouldn’t you use it? cant wait for the link to the airport.

Tony Webber even the 6am LR service is standing room only

Tony Webber well mate. Your mates might not… but hundreds do.

Tony Webber carried 1million passengers in 3-4 months of opening. White elephant? If that is a ‘white elephant’ result, you seem to have the bar set way too high.

Laura Frame that’s my point,, millions spent for hundreds to use!!!!!

Tony Webber Get a grip. You know that many more are using it than that, but you wanted it to fail. It hasn’t. Just be a bigger person and accept it’s very successful.

Maria Greene you would love this🤪

Would we not be better to let the new system bed down for a year or two and examine its introduction against the metrics outlined in the cost benefit analysis to ensure that the resources out-laid have been effectively used and the proposed benefits realised?
Then we can embark on any proposed extensions.

After all, isn’t the whole idea of the light rail to provide a benefit to the people of Canberra?

Steve Herczeg light rail stage 1 is a total success. Already over a million passengers. Billions of dollars of private investment in urban renewal in the making along the northbourne corridor. Thank goodness for this forward planning, for the decades to come. Very proud Canberran.

Jason McMinn Billions of dollars of private investment in renewal of developers’ wallets.

And you can’t call the system a success until you’ve done a cost benefit analysis. And in that analysis they should factor in the effect on Canberrans of the reduction of bus services to the rest of Canberra to pay for the light rail. You can’t count something as a success if the number of passengers lost to bus services is equal to or greater than the number gained by light rail.

Jason McMinn More like 3000 passengers using it a lot and few joy riders in the free month not one million passengers at all.

They have a population that can afford such follies- we do not.

They are anticipating 50,000 rides per day on the east link extension. Think about that. That’s their anticipated benefit for US $54 billion.

According to U.S. Census data released in 2018, the Seattle metropolitan area’s population stands at 3.94 million, and ranks as the 15th largest in the United States.