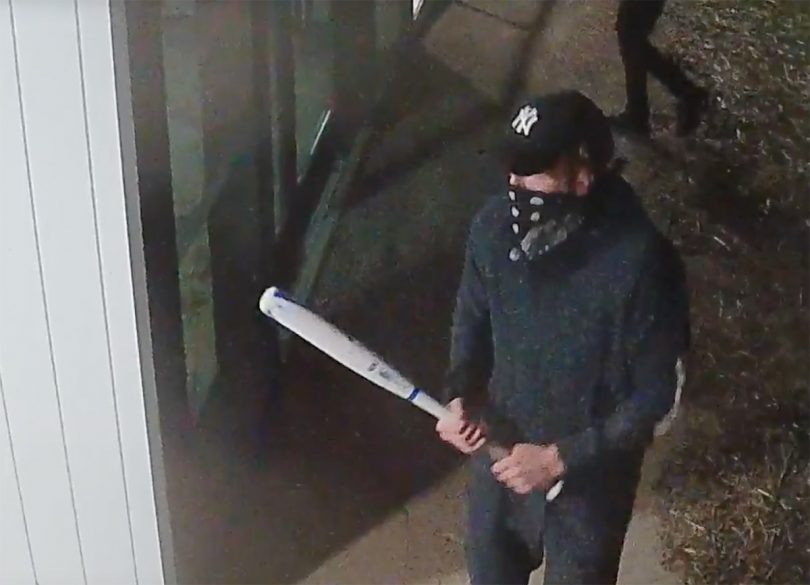 Police are on the hunt for vandals who went on a rampage at two of the ACT’s elite private schools early on Monday morning (9 July).

Police said the attacks occurred between 1:00 am and 2:00 am, causing extensive damage, with the windows of school buses at both campuses also broken.

The CCTV footage captures the attack on the Rowing Centre.

One offender was wearing black Adidas branded tracksuit pants, a black, long-sleeved Nike SB top, and had his face covered by a dark piece of cloth with a lighter pattern. He was wearing a black New York Yankees baseball cap and black Nike shoes.

The second offender was wearing a long-sleeved black top, black tracksuit pants, black shoes, and had his head covered by a lighter-coloured length of material as a makeshift hood.

A Canberra Grammar spokesperson said 110 windows were broken and all had now been repaired. Girls Grammar declined to comment. School holiday programs were not disrupted at both schools.

Police would also like to speak with the driver of a vehicle that drove past the Rowing Centre while the incident was taking place. The driver is not believed to be involved in this incident, but they may have seen it, or have other information that could help police. The vehicle, which is also pictured in the CCTV footage, appears to be a blue sports car, possibly a convertible MG.

Police urge anyone with information that could assist in this investigation to contact Crime Stoppers on 1800 333 000 or report via the Crime Stoppers ACT website.

That’s terrible – what do they have against the place!

Also the offenders drive a legit bucket of bolts 🤣🤣

Hope they get caught soon and they will 😡

If they get caught they should be desexed!

Bet he moonlights for Antifa at the weekend!

Lock them up and throw away the key! Hopefully the police will catch them – senseless vandals!

What has that got to do with it???

Someone must know this guy, he’s clearly not a kid either.

Andrea Kerr seems like it’s targeted to two schools so maybe a disgruntled party in a family law matter. The school fees are expensive!

You should have to register your details to a national database when you buy adidas clothing.

Wtf is wrong with people?

There is a certain subset of society that is encouraged to believe that their failure to become a rock star / tech billionaire is due to the existence of ‘posh’ schools.

I expect these two angry morons are in that category.

Maybe someone that hates that expensive private schools like this exist?
I’m guessing the police will check out the radical groups to see if anyone is bragging?

Then why target the girls grammar? Seems more like a problem with private schools to me

What is wrong with the world today. Bloody junkies

Interesting, why ? Glass company needs work ? more to this story .

How pathetic. It’s fabulous in Canberra that schools don’t mind kids playing on their equipment or walking through the grounds, etc, when not in use. Not something you see in Britain anymore, unfortunately. This kind of mindless behaviour will ruin it for everyone.

Not so common here anymore either. They have all been fenced off 😕

Kirsty the two local primary schools near me still have accessible grounds. My son was riding his bike around the little Catholic one recently on a holiday and fell off and the head ran out to make sure he was okay and ask if we needed anything, which was lovely. The bigger school has the playground right next to the school fenced off, but there’s still some basket ball courts and some climbing equipment accessible.

I hope they’re found so they can pay for the damages caused.

What is wrong with people?
Get a damn job, come home friggin exhausted like the rest of us, curl up in front of the Tele and go to bed- repeat.
Then there will be no time for this sort of bs!
No respect, at all 🤬
I hope they get caught soon.

Well said. So many half baked idiots in the world.

There was a black bandanna like that one at the Green Shed underground yesterday. Still folded in a triangle and tied.

Nah. My black bandanna quota is filled. 10 was keen though.

You should call the police and report it then

Well, that one with the thick beard showing is clearly not some “bored adolescent”.

If Canberra residents knew how much vandalism cost the A.C.T. school; system I think they would be shocked, I know of one school that had 37 windows broken over a weekend. Graffiti and broken windows take a large slice of a schools maintenance budget.

That stuff would be worth the investments in ALL schools. So many times we had preschool canceled because the teaches arrive on Monday to smashed windows! 😞

Someone with a grudge if they’re targeting all three Grammar school properties.

The level of mindless vandalism in the ACT is terrible but usually it’s the neighbourhood public school that gets targeted during school holidays.

I’d be looking for the owner of a glazing company with a class hate for private schools.

Don’t know about mindless, looked planned to me.