Venture out after dark for Enlighten 2015 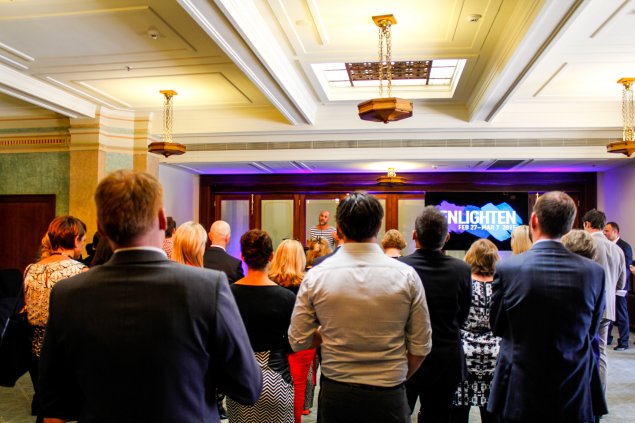 Enlighten will breathe light, colour and movement into Canberra after dark from 27 February to 7 March with a world-class program of events including two Australian premieres.

Now in its fifth year, Enlighten will transform the Parliamentary Triangle into a dazzling arts precinct featuring free entertainment and the event’s trademark architectural projections, which will illuminate six of Canberra’s most iconic buildings.

The 2015 event also welcomes the exciting addition of the new Enlighten Night Noodle Markets, which will create a bustling atmosphere with an array of authentic Asian eats, themed bars and live music in Upper Commonwealth Place.

“We have partnered with 12 of the capital’s cultural institutions, who will open their doors after dark to host a range of exclusive events and surprising experiences. However tickets will sell out quickly, so make sure you book early.”

Ticketed events include the Royal Australian Mint’s 50th anniversary celebration, Party Like its 1965, the National Museum of Australia’s By The Water concert featuring Katie Noonan and the opportunity to enjoy a sunset on the roof of Australian Parliament House.

Visitors to Enlighten 2015 are in for a real treat with two Australian firsts – the extraordinary Spanish aerial act, Voala Station, and a visually spectacular light installation that will be staged on Lake Burley Griffin called Voyage.

Musical magic can be found in the Electric Garden with a range of DJs and bands such as Melbourne indie pop outfit Alpine and Canberra natives Liam Budge and Crystal Barecca. The soulful indie-jazz band Lake Street Drive will also come all the way from the USA.

It’s the best event/festival in Canberra every year by a mile!

Steve Aust - 25 minutes ago
Colin Parton tell 1 story here View
Louise Flint - 55 minutes ago
James Daniels I was sent there for advice before I took a redundancy package. They ignored my superannuation and taxation que... View
Patrick Barrett - 4 hours ago
Dylan your fault View
News 22

Evan James - 8 hours ago
Well said, Tim!✔ View
chewy14 - 9 hours ago
"And the federal border force was happy to let other players through, on the same exemption, before ND arrived." Who were the... View
LietDao Do - 10 hours ago
… I don’t want to see/talk about him anymore… let it past. View
Opinion 144