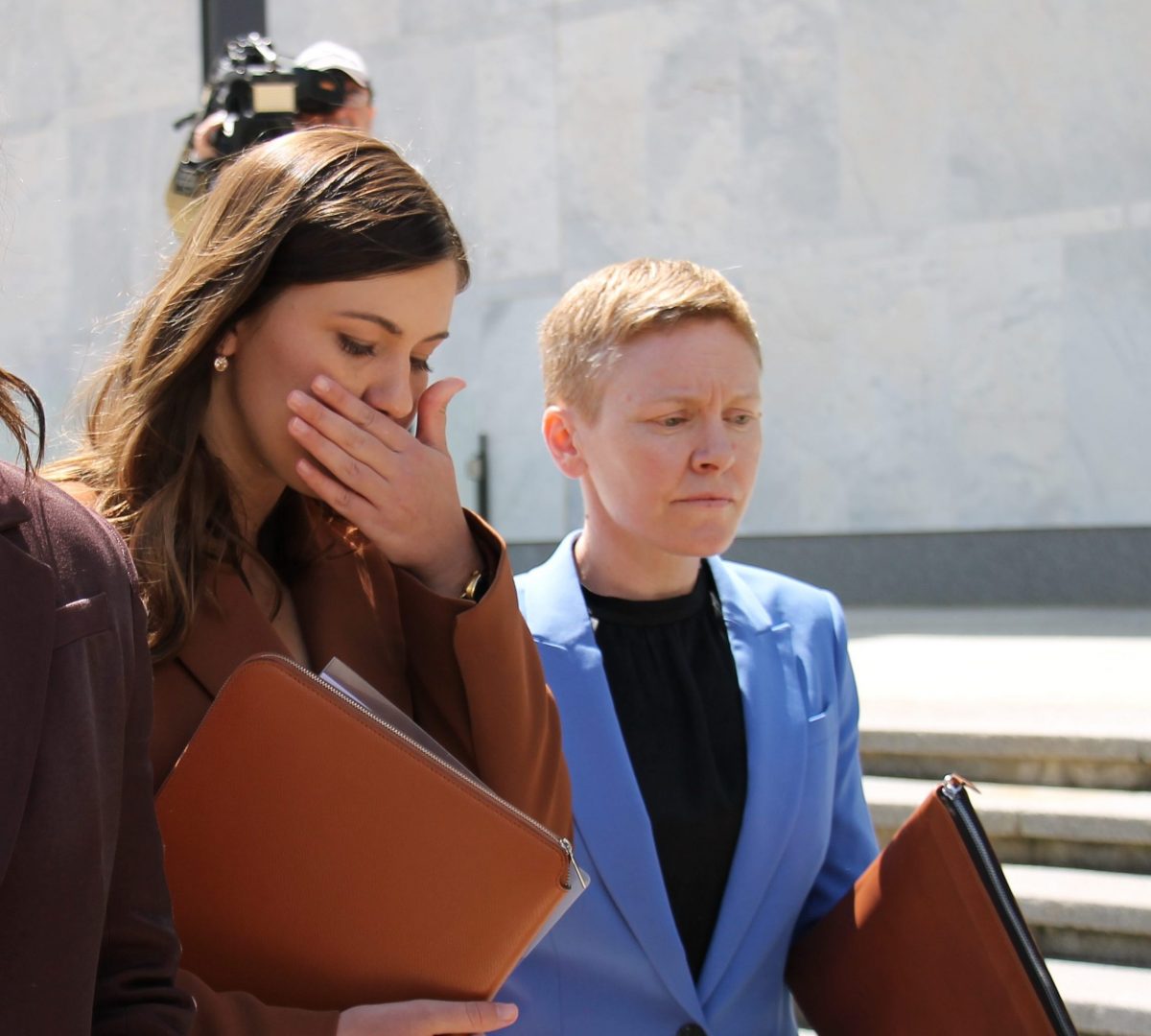 Throughout the trial of Bruce Lehrmann, Brittany Higgins was supported by Victims of Crime Commissioner Heidi Yates. Photo: Albert McKnight.

During the 12-day trial of accused rapist Bruce Lehrmann, complainant Brittany Higgins was supported throughout by a familiar face – ACT Victims of Crime Commissioner Heidi Yates.

But she’s defended her position – and been backed by the ACT Government.

In annual reports hearings this morning (11 November), Ms Yates explained her interpretation of the legislation meant “victim-survivors” of alleged crimes could also be supported throughout the court process.

She said the Victims of Crime Act defined a victim as someone who suffered harm because of an offence, and when the legislation was first introduced, it was intended to be “beneficial”.

“In practice, that narrow definition would limit the provision of victim support services, including court support services, to a very small proportion of Canberrans affected by crime. Such services would only be available to people at the tail end of the justice process.

“In my view, that’s not the kind of approach envisaged by the new Charter of Rights for Victims of Crime … which provides for victim-survivors to exercise rights throughout proceedings, including proceedings against an accused.

“It’s very common for victims of crime to seek support and advocacy from our office whilst engaged in the criminal justice system, including the trial process, simply because navigating the justice system can be retraumatising and complex for people in times of distress.”

Ms Yates confirmed she and her office could provide support to victims of crime where the offender had yet to be charged.

This included sexual and family violence offences, of which few are reported to police.

She also said she had sought legal advice on the matter but could not provide this to the committee as it was privileged. 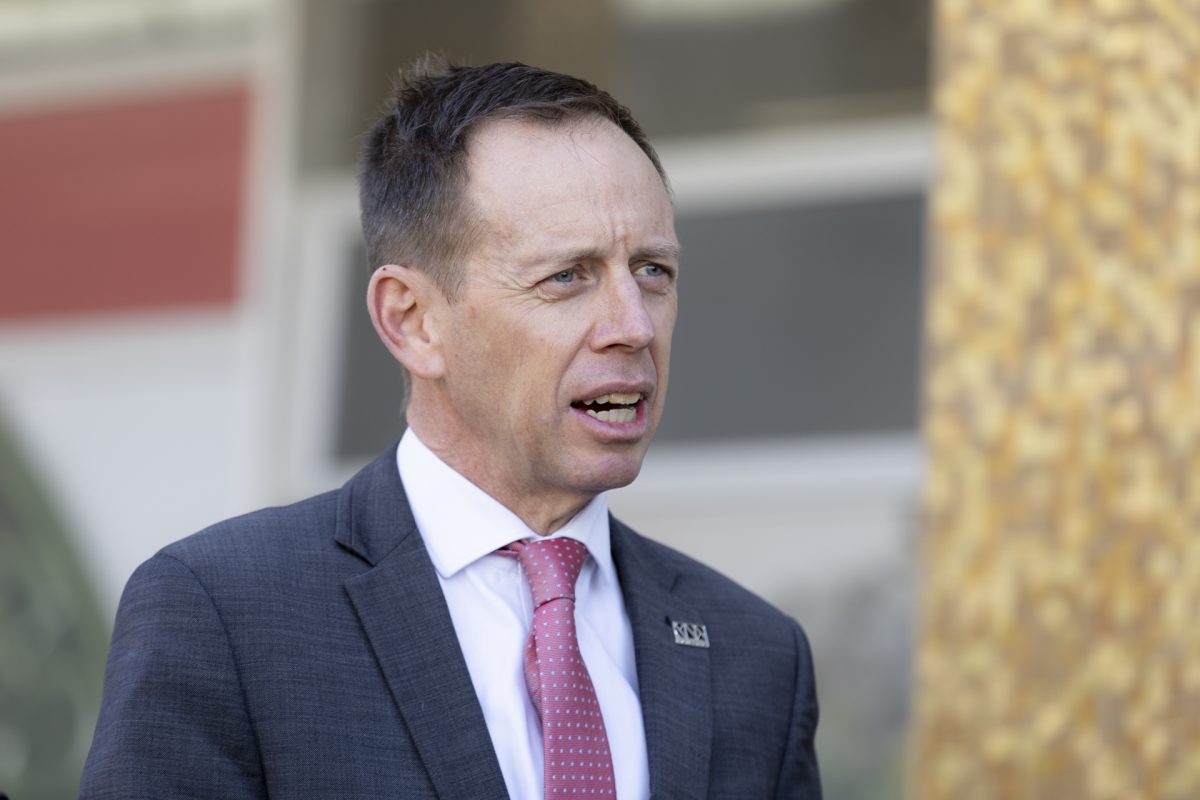 Attorney-General Shane Rattenbury said anyone who was an alleged victim of crime could get support through victim support services. Photo: Michelle Kroll.

Earlier this week, Attorney-General Shane Rattenbury was questioned by his Opposition counterpart Peter Cain about Ms Yates’ appearance at the trial and whether it implied Ms Higgins was already being perceived as the victim of crime before any legal decision was made.

Mr Cain asked in an annual reports hearing on Tuesday (8 November) whether Mr Rattenbury had any concerns about her presence in some way tainting the presumption of innocence in the eyes of the public.

But the Attorney-General said while he was aware of some of these viewpoints, he did not support them and it was not the intent of victim support in the Territory that no one could be supported before a guilty verdict was handed down.

“If we take that, nobody would get any support until after the court case had finished,” he said.

“That’s clearly not the intent of having victim support in the ACT. It is the government’s position that we seek to support people who are allegedly victims of crime … the court process can be extremely difficult.”

Mr Rattenbury also went on to explain that the Chief Justice had been clear with the jury about the matters they were required to consider in the case and those they were not.

The Canberra Liberals MLA pressed for confirmation on how many times Ms Yates appeared at previous matters of either sexual assault or domestic violence “in such an open and media manner”.

Mr Rattenbury said a “whole range” of Victims of Crime commissioner staff attended court proceedings, but he could not confirm how many times Ms Yates attended personally.

In a statement later provided to Region, a spokesperson for the ACT Human Rights Commission said although trained staff and volunteers generally administered the program, more senior staff would do so when intense media scrutiny was expected.

“For example, the previous Victims of Crime Commissioner, Mr John Hinchey, provided extensive court support to the Winchester family in the trial of David Eastman,” they said.

He said not many trials received this amount of media coverage, which was why Ms Yates’ role had received such intense scrutiny.

“The media are filming the arrival of Ms Higgins at the courts far more frequently than you would see in a normal court case before the ACT courts,” Mr Rattenbury told the hearing.

The trial of Mr Lehrmann is set to recommence next year after the first attempt ended in a mistrial late last month when a juror was found with contraband documents.

Ms Higgins’ comments in the wake of the mistrial have since been referred to the court and police by Mr Lehrmann’s lawyers.

It’s a case of micro-management. Ms Yates obviously can’t trust anyone else in the office to hold hands, wipe tears or nod defiantly when her client speaks.

That, or she is embarking on a political career and she needed some footage (in slow motion of course) of her walking with her high profile client.

Agree 100% with what you said, DJA. Our justice system is based on the principle that a person is innocent until proven guilty; what the VOCC has done goes against that.

For the ACT to have an officer with the title “Victims of Crime Commissioner” who is authorised to decide, in advance of any guilty plea or criminal-court guilty verdict, when someone who claims to be the victim of a crime is indeed a “victim-survivor”, is obviously a violation of the innocent-until-proven-guilty principle which is a fundament of Western criminal law. The violation is exacerbated when the thus-titled officer publicises the fact that he/she, in his/her official capacity, has accepted the claim of such a claimant. The violation is exacerbated even further when the officer, or a subordinate, accompanies the claimant to the court where the claim is being tested, whether before a judge alone or before a judge and jury. In the latter two circumstances the public, and thus any jury selected from the public, are necessarily being tainted against the accused by the “Victims of Crime Commissioner” and thus, by extension, by the ACT government.

So familiar – negative and divisive comments, always from Liberals.

Precedent has been set. I look forward to Ms Yates publically support ALL victims, not just the ones that get a national run in the media.

Looks more like someone is setting themselves up for a run at the next ACT election under a Greens banner.

Well that is what the Victims of Crime office does TR. How lucky we are to live in a city where victims of crime have this support!

And where has she been of the other sexual assault victims.

100% agree for victim support, but I don’t agree that the Commissioner needs to be grand standing. She could have stepped away from the camera and still offered support.

totally agree on providing support but when it’s the Commissioner herself it sends the wrong message. what about Bruce Lehrmann, he has yet to be convicted in an increasingly unfair process.

Whatever the legal outcome it is clear that she needs support, having the Victims of Crime Commissioner personally accompany you to your highly televised court appearance to stand at your side has raised a few eyebrows though.
Is this level of support consistent with what is offered to all ACT victims of crime, of course not.
With all the high profile female politicians and media personalities that have inserted themselves in to this case the chances of a fair outcome has been reduced.