A schoolgirl’s assault conviction has been set aside by an ACT Supreme Court Justice. Photo: Michelle Kroll.

A schoolgirl, who apparently lashed out at a police officer, has had her conviction quashed after a court viewed previously unseen video footage and ruled the officer had done “a great deal more” than just touch her on the shoulder.

Police had been called to a school on 22 October 2020 and when they arrived they wanted to speak to a group of children.

The girl was part of this group, but started to leave before officers could talk to her, apparently to call someone for advice.

She was followed by a police officer and a “physical exchange” occurred, Justice Elkaim said.

He said when the girl was convicted in February 2021, Magistrate Robert Cook from the ACT Children’s Court’s found the officer’s initial physical contact with the girl was unlawful.

But he said Magistrate Cook also examined what the girl did to the officer and decided her actions were “entirely disproportionate” to what the officer had done to her.

“In other words, he compared the reaction to the action,” he said.

However, Justice Elkaim decided Magistrate Cook had “either misinterpreted or misdescribed” the officer’s actions.

He said the magistrate had believed the officer touched the girl on the shoulder but Justice Elkaim said he “had the benefit” of viewing footage taken by another police officer.

“The interaction on the video is very brief, but it shows clearly that the Constable did not only ‘touch’ the shoulder of the appellant,” he said.

“She did a great deal more.”

He said due to this, the comparison of the girl and the officer’s actions had to be set aside and he therefore found an error had been made.

Justice Elkaim considered sending the case back to the Magistrates Court for another hearing.

“Having regard to the nature of the offence, that would seem to me to be in itself disproportionate,” he said.

He upheld the appeal and set aside the conviction.

I am a 67 y/o retired serviceman (RAAF) and I have never been in trouble in my whole life and had never had any exchange or interaction with police u til a few years ago when the ACT police come to my house, forced there way in to my room and man handled me, assaulted me and threw me in the back of their van and took me away. All based on a false allegation, to which I was unable and prevented from giving my side of the story. I will never trust a cop again.

Another step forward for the soft left.

So, you were there? You saw it? What does the “left” have to do with it? 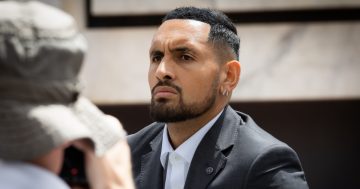