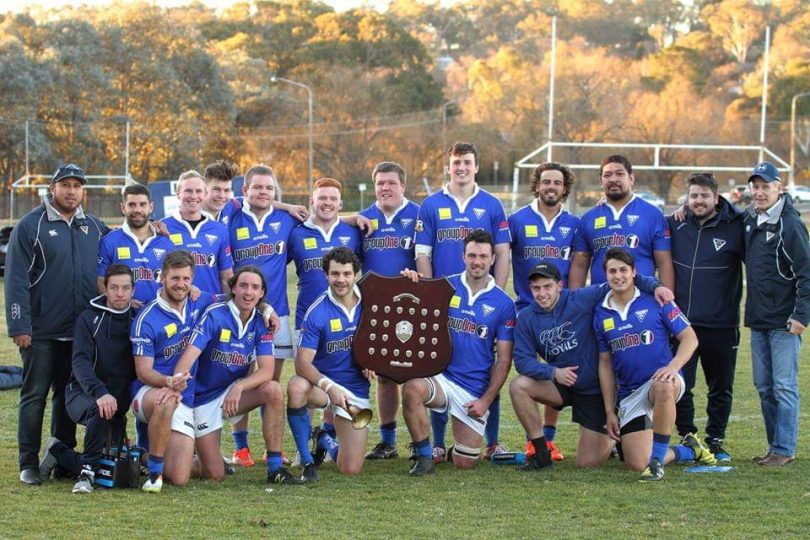 Royals Rugby has been one of the ACT’s most successful clubs with 16 premierships to its name. Photo: Supplied.

It is fitting that two of Canberra’s most iconic brands have joined forces, with Village Building coming on board this season to sponsor the Canberra Royals Rugby Club.

More than just a developer and construction company, Village Building has been actively engaged with the Canberra community in various projects and sponsorships for more than 30 years. Royals have been one of the ACT’s most successful sporting clubs with 16 first grade premierships to its name.

The success of Royals is not confined to premiership victories, with the club run by volunteers boasting four grade teams, a women’s team and an under 20s side.

The women’s team, which joined the competition in 1995, has won 14 premierships, going undefeated in two of those seasons.

Then there is the production line of international players produced by the club. Royals has produced over 20 internationals, including seven Wallabies and 10 Wallaroos.

Away from the football field, Royals participate in several prestigious exchange programs with players spending a season playing rugby overseas. For these individuals, this is a life-changing opportunity.

Travis Doherty, Village Building’s CEO, says the Royals’ ethos represents similar values to Village. “There was an opportunity to become involved with the club as a major sponsor. We saw how this opportunity aligns with our community-based values in supporting the region in which we operate.”

That commitment to Royals is significant with Village Building signing on as a major sponsor for the next five years.

Royals Co-Sponsorship Manager, Craig McMahon, says having Village Building on board has given the team added confidence. “They have been a fantastic sponsor for us. Most of our sponsors are year to year, so to have a company like Village long term is great. It translates onto the field.”

Travis says the arrangement with Royals is more of a partnership rather than a sponsorship. “We have been involved in their RUOK round, and we obviously attend each home game. Currently we are working on getting the broader Village team involved,” he says.

Craig says an important aspect of his club is the players’ recognition of the role undertaken by sponsors such as Village. “One of the things our players know about our sponsors is that they are more than financial contributors, they help us in all aspects of the club.

“Our sponsors are recognised as some of our strongest supporters. Village are relatively new, but have quickly become an important part of our club.”

Village Building has been actively involved in supporting sport over a number of years, including sponsorship of Alison Woodall from the Gungahlin Jets, sponsorship of the Weston Creek Molonglo Wildcats and also the Queanbeyan Junior Tigers.

Travis Doherty says Village Building has developed communities for over 30 years and believes the organisation’s sponsorship of Royals Rugby is just another way of helping connect people with their community.

Village Building’s active participation in the advancement of Canberra’s youth and community members has made this city a better place to live, a sentiment echoed by the Royals Rugby Club.

Oiledpengu - 23 minutes ago
Cos poor people shouldn’t be responsible for their actions View
Jimbo Lambert - 1 hour ago
Justo Justo some people have driven that stretch of road for 30 or 40 years at 60km/h. If they suddenly reduce the limit it i... View
Dean Soccol - 3 hours ago
Nathan Grieve in Queensland every time we get a fine we lose points. So if you are one of those that don’t care about the m... View
Community 2

Ann Gugler - 25 minutes ago
I met Alan many years ago and hopefully I have copies of all his books, but I will keep an eye out for others just in case I... View
Opinion 7

austted - 58 minutes ago
There is a good reason why our early settlers planted deciduous trees near their houses. We need to get away from this myth t... View
TimboinOz - 5 hours ago
We have three gum trees close to the street - probably in TCSS's area, and I wouldn't be without them. Yes, there's a risk. View
News 33

phydeaux - 60 minutes ago
I doubt the present value of the QR system compared with its original use, although I am extremely confident it never did hav... View
phydeaux - 1 hour ago
TheSilver, I recall you have previously been asked for the references for those studies but I do not recall seeing a response... View
jorie1 - 2 hours ago
I disagree with you. The governments over-reacted and there will be a big backlash against them for the way they have mistrea... View
Community 8