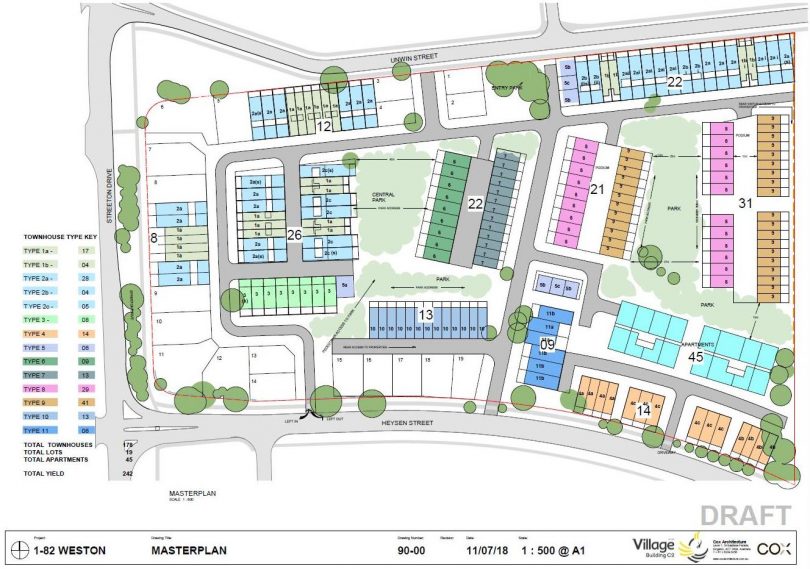 Village Building Company has relocated and reduced the number of units in the contentious three-storey apartment block planned for its Weston housing development as part of a raft of measures to appease community concerns.

Village today (Monday) released its revised draft plans for the six-hectare former AFP site, which also include the re-siting of detached houses and townhouses so the development was more in keeping with the character of the neighbourhood, more open space, the retention of more trees and measures to allay traffic concerns.

The revised draft plans show 178 two to four-bedroom townhouses, 46 apartments instead of the original 60 and 19 lots for detached houses, eight more than before. 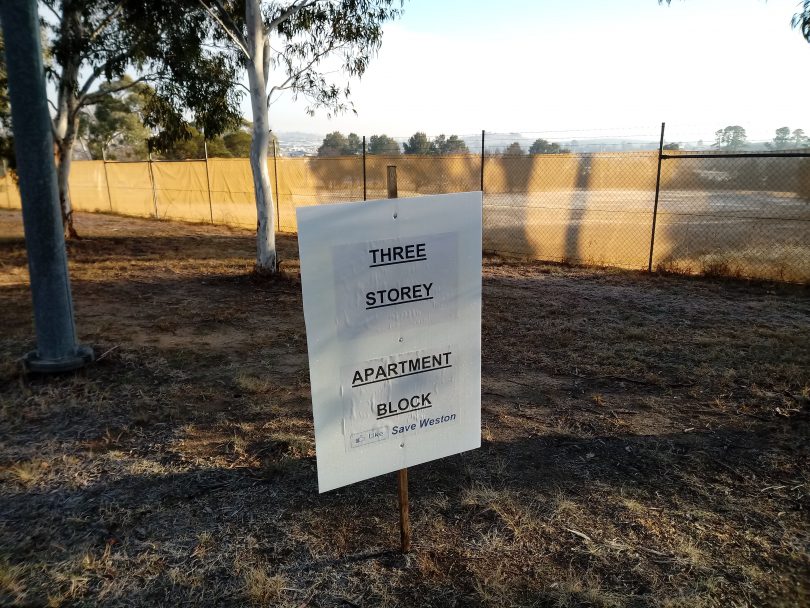 “Our vision for this site is to develop it into a valued part of the Weston Creek community, one that provides housing options for a range of people in different situations from downsizers and homes for young families,” he said.

The apartments, originally planned for the top southern corner, have now been located more towards the inside of the site as the land falls away to the north, which Village said created no visual or shadowing impact on existing residents in Heysen Street.

He said that separate residential lots had been relocated on to a portion of Heysen Street to reflect the existing Weston character.

“We envisage buildings on these sites will be two-storey standard residential houses. We are planning for these lots to be rear-loaded from the internal site road network, therefore, not directly impacting Heysen Street,’’ Mr Hunter said.

He said two-storey townhouses would now occupy the top portion of the site facing Heysen Street to minimise building form and scale, and to more closely reflect the existing built form on the southern side of the street.

“Townhouse densities increase towards the middle and northern (Unwin Street) side of the site providing good product diversity for a range of demographics,” he said.

View of townhouses on Heysen Street.

Mr Hunter said more useable, open and consolidated landscape space would be made available through the tightening up of townhouse footprints with undercroft parking.

Mr Hunter said Village was committed to ongoing engagement with the neighbouring Fetherston Gardens to ensure “appropriate connectedness with the much-loved parkland’’.

Mr Hunter said site entry and exit points were designed to spread the load for access and egress, but minimise, where possible, impacts on traffic congestion.

“From Heysen Street, the western access is envisaged as ‘left in, left out’ only so as not to impact traffic build-up on the Heysen St/Streeton Drive intersection,’’ he said.

“The eastern access point is only a drive point to the 14 townhouses on this portion of the site, the third access point is planned as a two-way access point, and the main site access is along Unwin Street to the north.”

Village said that a traffic impact assessment it conducted in recent weeks indicated the surrounding street network was performing within the standard ACT guidelines.

It has also engaged an independent consultant to peer review the Traffic Impact Assessment and will provide details as soon as they are available.

Experts such as architects and traffic engineers will be available to answer questions and provide further feedback at the next general meeting of the Weston Creek Community Council in the Chapman Primary School Hall on 25 July at 7 pm.

To view the revised draft plans and presentations go to weston.villagebuilding.com.au

Anthony Briscoe - 2 minutes ago
Michael Wilson he is a brick wall View
Cleve Gabriel - 5 hours ago
Can’t see it happening ,he’s there for as long as he wants unfortunately. The shame of it all is that represents himself... View
Penelope Farnsworth - 6 hours ago
It tends to be hard to shift the one Labor one Liberal Senate pattern for the ACT View
Lifestyle 4