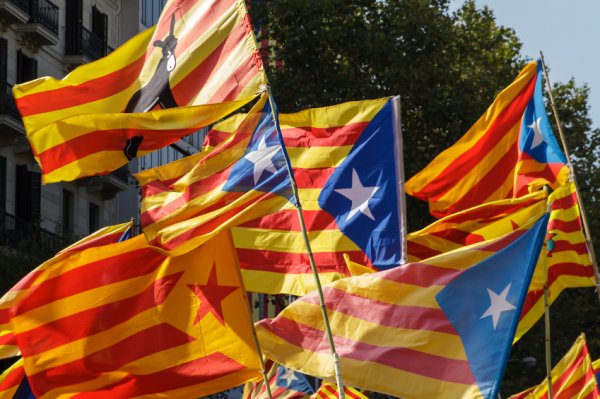 I have cousins in England and decided to pay them a vist. Since I had never been to Spain, Barcelona seemed to be a good idea.

It’s a lovely place and I recommend it to fellow travel addicts. Quite a lot of history here.

What I didn’t know was I would find myself in the middle of a bit of history in the making. Just like Scotland, the Catalunyans want secession from the federation. It turns out that Catalonia wants to go it alone.

Yesterday, I walked into a demo in Catalonia Plaza. Hundreds of protesters from both sides! But no violence, no abuse. Just a lot of symbols, flags etc and loud music. Great stuff for a tourist like me!

From what little I saw, the numbers were about 75% in favour of secession.

It made me think of the Scottish referendum. That one didn’t get up and I don’t think this one will either. Also, apparently, unlike the Scottish one, this referendum is not binding.

Makes you think though. What if they did secede? What currency would they have and do they have the reserves to back up that currency?

What about a defence force? Like Spain is going to oblige! Not!

There were so many unanswered questions with the Scottish referendum and the same is the case here.

The good thing, though, is that the issue of Basque initiated violence in the name of secession is absent.

What I have noticed, similar to the Scotland that I know, is that there is an antipathy from the ordinary Catalunyan towards the Spanish in Madrid! “We work here in Barcelona, they siesta!”

I have to think of the time Jo Belke-Petersen wanted to secede Queensland. Maybe we should have let him! Canberra gets bashed more by Queenslanders than any other state, possibly excepting Victoria.

Bugger, missed each other by less than a week. It would have been good to catch up for a beer.

The “European Men’s Carry-All” is too tempting for the Las Ramblas set.

Watch out for the pickpockets. The place is infested.

Thanks for the advice. I encountered two sets (of two guys) the first of which tried to pick my manbag and the second were lining up to have a go.

Both were sprung and abused by yours truly! Awareness is the key….

For the most part becoming a new country wouldn’t actually be difficult. They keep using the euro, they’d hold elections for a new parliament, most likely they have one now anyway. I don’t think Spain will be as obliging though as offering a referendum. To be honest while having your own independent country has its benefits, when your country goes through the rough times its generally a lot harder on a smaller country with less resources.

I’m sure though is Spain offered a referendum or chance to secede that the locals would take it.

Watch out for the pickpockets. The place is infested.

If they want to go, let them. San Marino, Luxembourg, Lichtenstein, etc do alright so why not a new country with Barcelona as it’s capital? Same with Navarra with Pamplona as it’s capital. Remember John that it’s not that long ago that Italy was a group of city states.

Spot on. I’m all for Catalan independence. Consumer fireworks are not legal because they are explosives not the gunpowder ones of yesteryear.

If they want to go, let them. San Marino, Luxembourg, Lichtenstein, etc do alright so why not a new country with Barcelona as it’s capital? Same with Navarra with Pamplona as it’s capital. Remember John that it’s not that long ago that Italy was a group of city states.

Whatever happened to multiculturalism? Where did all this provincialism come from? Wouldn’t it be better if there were no borders anywhere?

ISIS are working on that right now.

Whatever happened to multiculturalism? Where did all this provincialism come from? Wouldn’t it be better if there were no borders anywhere?

Are fireworks legal in Barca John?

Zakzook Chico - 15 hours ago
Patrick J Pentony couldn’t agree more View
William Coats - 16 hours ago
So after 20 years this Labor Greens Government is ready to promise action. I guess we will have to wait and see. View
Patrick J Pentony - 16 hours ago
Rheyce Spears we are at the start of the twentieth year of labor greens gov in the ACT. Not sure you can really blame anyone... View
Opinion 3

Who would have thought that Canberra's Nick Kyrgios would morph from tennis brat and national embarrassment to statesman of the...
Food & Wine 9

Thai is one of my favourite cuisines to cook and eat. Fresh humble ingredients perfectly balanced to achieve harmony between...
Property 0

Region Media Group Editor Genevieve Jacobs has been recognised in the Australia Day Honours for her service to broadcast media...
Opinion 50