The name Meaghan McElligott made defenders tremble in their boots in the NPL Women’s competition in Queensland.

Now W-league defenders will have the responsibility of handling the deadly striker after she secured her first professional football contract with Canberra United following a stellar two-week trial with Heather Garriock’s squad.

The 23-year-old blitzed the NPLW Queensland last season, scoring 31 times in 17 matches for Gold Coast United before a mid-season switch to the Moreton Bay Jets saw her light up the league with her new squad to the tune of 19 goals in nine outings.

Over the last two years, McElligott trained with the Brisbane Roar squad during both pre-season and throughout the W-League season but was never granted an opportunity and dropped out in March to focus on NPLW.

Even coming as one of the best players in the local Queensland competition to Canberra United has been a step up for the young forward.

“It is a huge step up in fitness and even your expectation on how good your touch is. When you are playing in a team with world class players, you have to have a good touch,” McElligott shared.

“The two week was extremely stressful, to be honest with you. It felt like it was do-or-die each day. I even told Heather at the end of the trial that I let the pressure get to me, which is something I’ll continue to work on.”

McElligott made a lot of sacrifices to take her opportunity in Canberra, studying her university course in Queensland through correspondence and financially paying for her stay during the two-week period. She said she was relieved that her decision to put a lot on the line to chase her dream of being a professional footballer was the right one. 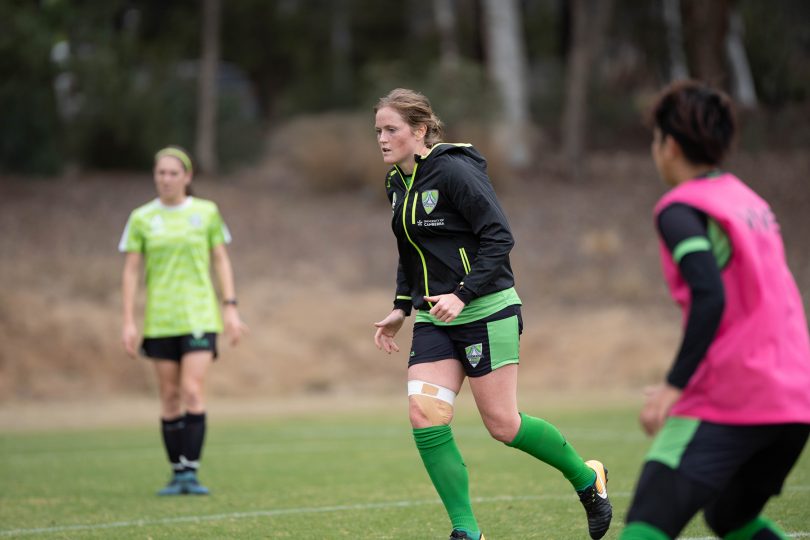 McElligott said she was starstruck when she first met assistant coach and former W-League Golden Boot and Julie Dolan Medal winner Ashleigh Sykes but is looking forward to learning off one of the best strikers the league has seen.

“Growing up, Ashleigh was an idol of mine and I think she was an amazing player,” she said. “I was a bit starstruck when she started talking to me at training. I have been asking her as many questions as I can because if I can learn off a player who has just come off her career, it is the best education I can get.”

Canberra United head coach Heather Garriock said she was drawn to McElligott’s impressive goalscoring record and was surprised other W-league clubs did not attempt to sign the sharpshooter.

“Meg was a revelation this year in the NPLW and an outstanding example of the local talent that exists at club level around the country,” she said. “Her record speaks for itself and we are delighted to have her at Canberra United.

“After seeing what she can do this year and now in training it’s a wonder she hasn’t been picked up already, and at just 23 Meg brings plenty of experience to the Canberra United family.”

Garriock has a very talented forward line at her disposal for the upcoming season, with the club signing both the NPLW Queensland top goal scorer and the NPLW Capital Football top goal scorer, Aoife Colvill.

Another triallist Rosie Galea was awarded a scholarship contract after a stellar trial period as well to cap off a strong year which included an NPLW NSW title with Macarthur Rams.