War on plastic: Ainslie IGA customers urged to bring their own containers to deli 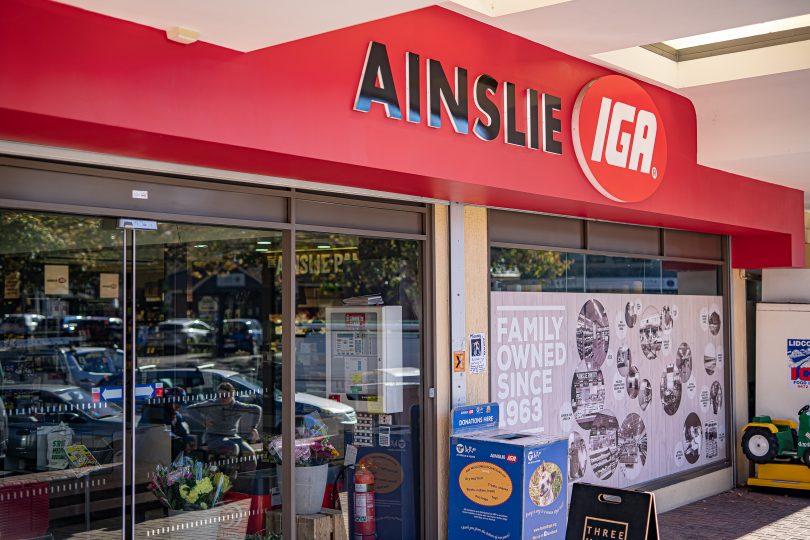 Ainslie IGA is on a crusade to cut plastic from its store. Photo: George Tsotsos.

Ainslie IGA is fighting a personal war on plastic waste by encouraging their customers to bring their own containers when buying products from the deli section.

Ainslie IGA’s store manager Dimitri Mihailakis said the store thought it would be a good idea a while ago but were concerned that some customers might bring in dirty containers and an issue for contamination might arise.

But with “rock solid” policies, food storage, and temperature checks in place, the store is now encouraging their loyal customers to bring their own containers.

“We have become very aware of our wastage, especially our plastic wastage, and doing what we can to fix that,” Mr Mihailakis shared. “We saw how much plastic was going out every day and thought about how we could cut back on it.

“The support has been just great. We pushed it on social media and people started tagging us and taking photos of their container. Other environmental pages in other states were sharing it saying ‘why can’t our supermarkets do this?’.

“Looking back on it, it was a no brainer and to be honest, we are a bit annoyed we didn’t do it earlier.”

This is just another frontier in the iconic IGA’s crusade against plastic waste after they introduced biodegradable trays in the fruit and vegetable section and recyclable trays for their meat.

“A couple of years ago we introduced soft plastic wastage and recycling outside the store, we have cut our waste in half and we have got organic recycling,” he said.

“We have taken away all the plastic cutlery from the deli, our trays that the meat is in the butcher are fully recyclable. Some of our fruit and vegetable trays are made from cornstarch, so they are compostable as well.

“We are also looking at a returnable container scheme for the deli as well but that is in its infancy.”

The store has even knocked the prices down on paper bags to the same price as the plastic bags at the checkout. Even though they are currently running at a loss, Mr Mihailakis said it was all worth it in an attempt to encourage more Canberrans to be environmentally-conscious.

“We are planning on running a No Plastic July so we will remove the plastic bags from the checkouts for the month,” he said. “This is something that I have wanted to do for a while so I think we can use this month almost like a trial run to see how our customers respond. I can see that as something we do permanently.

“If we can cut out 2,000 plastic bags a week from going out and ending up in the bin, that is massive.

“We are always looking for something new in the store and we are all putting our heads together to tackle plastic. It is all the little things in the store, and though plastic is the cheaper option, we have a responsibility to do the right thing.”

I do buy bread (sliced too) in paper bags. I have found that most bakeries (even Baker's Delight) are willing to give it in a paper bag if requested. Other times I have supplied a reused plastic bag.

I don’t live near Ainslie but this initiative is enough to get me to drive there to shop.

I take my reusable containers to kippax woolies, they have no problem with it.

Sadly we have been told we arent allowed to put products in your own containers anymore :'(

Olivia Taylor another reason to love them

It's a huge hygiene risk. I'm a health professional and a few days ago I treated a super-market worker who had a very serious allergic reaction to a reusable container a customer brought in, that had obviously not been properly cleaned. Reusable containers put staff and other customers at risk.

If they can have that reaction, then surely they run the risk of working in a supermarket, with all the products (including peanuts) available there.

Would the staff simply wearing gloves or having guidelines about not accepting unhygenic containers not solve this?

Natalie Grey how could you pin point it to that container?

Just another reason to love my Ainslie IGA!

Pull the other one, IGA! You sell your bananas, corn, peas, beans and more on styrofoam trays and wrapped in plastic.

Amazing!!! Love this so much guys.

We will be visiting that place then

Brilliant! I wish other supermarkets had similar policies. This week I tried to buy salami at Woolworths in Kambah, and I asked if the salami could be wrapped in the paper without the plastic bag. Salami is not messy (ie dripping) and I have bought it in paper only at other places. But at the Kambah Woolworths I was refused. I could not buy it without the plastic bag, which would then be wrapped in the paper. I didn't buy it there and walked out. What was their problem with this? (Being sarcastic here; is the paper they wrap the food in dirty?)

So I walked out as well , business taken elsewhere.

Woolworths is fighting hard against the 'bring your own container' movement. I even had a checkout operator ask me today why I didn't put the 5 loose potatoes I had bought in a plastic bag. Apparently "It would be easier to weigh and pack"

Marcel Bond That's why we need regulation. In my incident, I hadn't brought my own container, as I hadn't expected to do shopping. I only asked to have the salami wrapped up without plastic; just in the paper which they supply, which one presumes is clean 😏. I rarely shop in Woolworths and this incident gives me a reason not to.

Marcel Bond WOW, a whole five loose potatoes. How difficult to weight 🙄. I give them loose green beans 😂. But, sorry, I shouldn't really laugh, as their attitude🦖 is not funny.

Our Move to Zero film: https://www.facebook.com/australiandanceparty/videos/2151597188444034/ was shot at the Ainslie IGA. Highly commend their continued work in reducing the amount of plastic supermarkets. It would be fabulous to see this from the other Canberra IGAs. Lyneham IGA, Deakin IGA, Yarralumla IGA, Holt IGA, Campbell IGA, O'Connor IGA

Just another reason to love my Ainslie IGA!

I remember when I was little and it was Shoprite. There were no such thing as plastic bags only big brown paper bags 😍

Shelley Anne Me too!

Glenda Doyle you’re ahead of the times!

Bob Jones - 11 minutes ago
Ross Bryant just because you wouldn't use one doesn't mean no one else would. But typical Boomer attitude. View
Ross Bryant - 14 hours ago
Why introduce a problem that we didnt have to have? Walking is safer and there are buses, trams and ubers/taxis to get around... View
Lifestyle 3

Karen Castro - 28 minutes ago
I thought you and Anna would love this Emma Toal 🙂 View
Alison Abernethy - 13 hours ago
Absolutely! View
Nikki Hogan - 13 hours ago
Alison We’d better check this out! View
Sport 2

Donna Spackman - 29 minutes ago
Ack Weyman is an absolute legend in our small town, and will always be remembered in my heart 💙🖤💙🖤💙🖤 View
Nardia Kerin - 2 hours ago
Micknali Weyman what a lovely article. Xo View
Sport 4

Mavis C Devries - 40 minutes ago
Wow 😮 beautiful, but so big! View
Prianca Chowdary - 13 hours ago
Rama Gogineni and Kavya Kogantimaybe you guys should get this... View
News 2

Denise Bourke - 9 hours ago
I was disappointed U didn't get my Lego joke ... There's more people who share your view .... But í know the frustration. View
News 19

JC - 13 hours ago
The problem for the liberals with the swings you mention is that Hare Clark is used in ACT elections. Why this is a problem i... View
show more show less
*Results are based on activity within last 7 days

Canberra must lead the way in reducing plastic

@The_RiotACT @The_RiotACT
The Australian National Botanic Gardens is celebrating its 50th birthday with a new banksia garden that honours the iconic native plant https://t.co/5bSVuwmcuw (59 minutes ago)

@The_RiotACT @The_RiotACT
Ack Weyman was there every step of his son's league career, so it's fitting he'll also be honoured with a statue alongside Mick in Moruya https://t.co/Jx4esz2Mzl (3 hours ago)

@The_RiotACT @The_RiotACT
If you're driving to the coast, be prepared for more delays when safety improvement work is carried out west of McCardys Creek Road https://t.co/JtkZMJh3a5 (12 hours ago)