Carfentanil is for elephants and rhinoceroses, not humans.

The discovery of a highly potent opioid designed for sedating large animals such as elephants and rhino in a recent AFP drug seizure in the ACT has health authorities worried.

The ACT Government’s Analytical Laboratory has found the potentially deadly drug Carfentanil, an analogue of fentanyl, in the region for the first time, alarming medical and law enforcement personnel.

Chief Health Officer Dr Paul Kelly said the drug was not meant for human use and could kill, warning drug users of the danger of taking substances that may contain Carfentanil.

“Fentanyl and its various analogues (including Carfentanil) are highly potent synthetic opioids which, similar to morphine and heroin, have abuse potential,” Dr Kelly said.

“Carfentanil is one of the most potent Fentanyl analogues with a potency estimated to be 10,000 times that of morphine. The only known legitimate use for Carfentanil is the sedation of a large animal such as a rhinoceros or an elephant.”

Dr Kelly said the drug was so potent that a safe dose was so small it could not be measured outside a scientific laboratory as domestic scales were not accurate enough.

“A fatal overdose can be caused by accidental skin contact with a powder containing Carfentanil. A deliberate dose of less than a grain of salt could also kill,” he said.

“To date, there are no detections in the ACT where fentanyl or its analogues have been detected mixed with other drugs such as heroin, however drug users are advised to exercise extreme caution if they are not certain of the content of a substance.

“We are warning users that there is an elevated risk of overdose and they should not consume any product they suspect may contain fentanyl or its analogues.”

Dr Kelly said the effect was reversible with naloxone, but much more was required and medical and emergency services may not have enough supply to treat overdose patients.

He said it was only a matter of time that the drug should surface in the ACT because it had been circulating in other jurisdictions over the past year or so.

Its potency was an obvious attraction for drug dealers, who could cut or extend ‘product’ to maximise profits.

“In the United States, Canada and Europe, the increased use of these drugs has been linked to highly significant increases in the number of fatal opioid overdoses. Reports indicate that these have predominantly been the result of using unknown or deliberate mixtures of heroin/oxycodone and fentanyl or one of its analogues,” he said.

“In Cincinnati in the United States in August 2016, there were 174 overdoses linked to fentanyl in the space of just six days. The message is clear – this drug should be left to the animals.”

Dr Kelly said the ACT’s ambulance and emergency services had been alerted to the possible presence of the drug in the ACT.

Situations such as this have been used in other jurisdictions and overseas to mount the case for safe injecting rooms for drug users but Dr Kelly said it had been ACT Government policy not to have such a facility since the late 1990s. 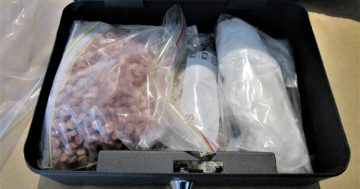