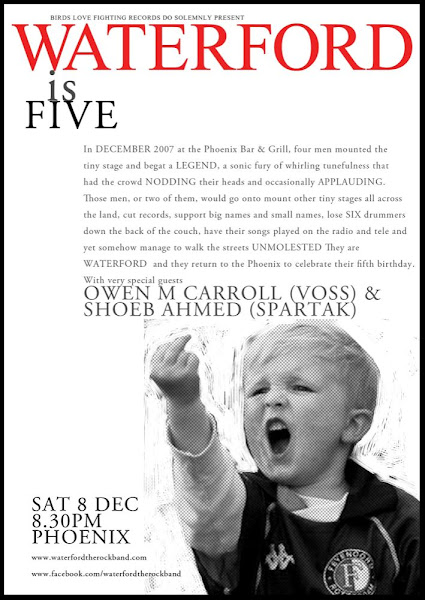 This very exciting news just in:

Five years ago Waterford first mounted the Phoenix stage. The band had formed two months prior, a last ditch attempt by Pete Huet to scratch that insistent rock itch before proper adulthood and its constraints arrived. He coerced his friend Glen Martin to finish the tunes he’d half-written over the years, grabbed a couple of friends to pad out the rehearsal room, and lo- Waterford was born.

Since that first shaky show Waterford have played almost 100 more shows, lost 6 drummers, cut an EP and an LP, found their tunes spun on JJJ, toured up and down the lower-east coast, supported their rock heroes (and several non-heroes) and have built a reputation as tunesmiths of a high standing. The band have been in the studio recording the follow-up to 2011’s Say Ok. The new record, a double, will appear late 2013 on Birds Love Fighting Records.

Waterford will celebrate their 5th birthday by returning to the Phoenix on Saturday December 8. Owen M Carroll (of Voss) and Shoeb Ahmad (of Spartak) will support.

Heather Wilkins - 3 hours ago
Hot tip! Don’t read the comments! View
Shane Jasprizza - 5 hours ago
Luke, the assets test has been temporarily suspended View
aaa123 - 6 hours ago
You won't be able to sell up as who is going to buy a house that comes with a freeloading tenant in place. You couldn't sell... View
Motoring 77

Carol Casha Wall - 23 hours ago
Ann Gugler did you attend? Or know someone who did?... View
Peter Kloska - 23 hours ago
Was a wonderful talk. Hearing stories during the early days of Canberra was fascinating. View
News 6