We have seen his star in the east, and are come to worship him. Comet Lovejoy over Tharwa 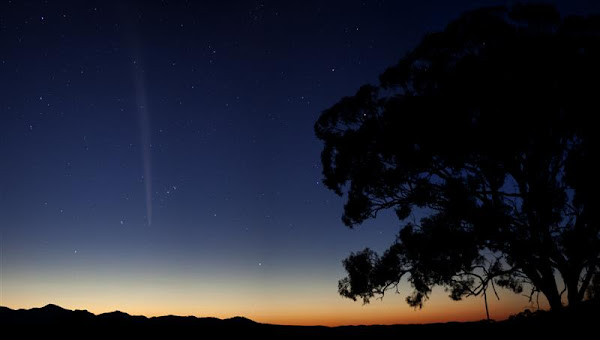 John Lafferty has sent in these great pictures of Comet Lovejoy blazing away south of Tharwa this morning with this note:

Comet Lovejoy as seen from just south of Tharwa this morning. If the skies are clear it should be visible due south tomorrow, but it does vanish by about 5am.

The comet’s path took it through the Sun’s corona on December 16th 2011 and it passed approximately 140,000 kms above the Sun’s surface. It was not expected to survive the encounter, but Sun-monitoring spacecraft, observed the comet emerge from the corona intact

The comet nucleus of Lovejoy is estimated to be as much as 500m before the passage through the corona of the sun. At its brightest the comet had an apparent magnitude of around –4 (about as bright as the planet Venus). It is the brightest comet to appear since Comet McNaught of 2007, which shone at visual magnitude –5.5. 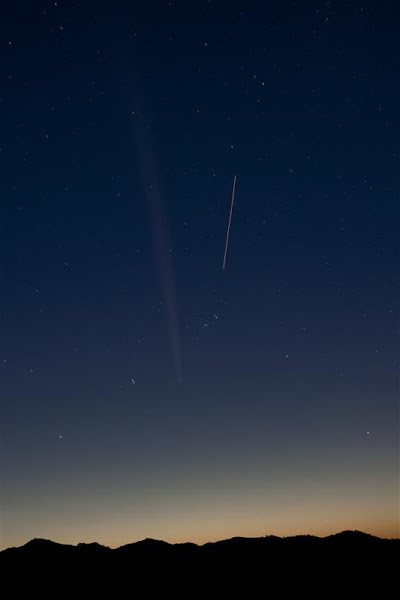 12 Responses to We have seen his star in the east, and are come to worship him. Comet Lovejoy over Tharwa
Filter
Showing only Website comments

Thanks Al. Lovejoy is a pretty impressive ‘amateur’ – discovered 3 comets and now has an asteroid named after him. Not bad for a Brisbane boy who fiddles with cameras and telescopes for a hobby!

Oh – and a link to information about the Australian amateur astronomer Terry Lovejoy:
http://en.wikipedia.org/wiki/Terry_Lovejoy

Great shots. I so wish Santa had delivered a Canon 550… My crappy camera didn’t even capture a visible comet. But when we ventured out at 3:30 on Christmas morning we did have a fantastic viewing session of the comet and much more:
http://alankerlin.blogspot.com/2011/12/awesome-early-christmas-morning-sky.html

Thanks for the pix – awesome to think that this came so close to the Sun and is now visible over Tharwa!

I think that Comet Lovejoy is a wonderful name. Can we have a Comet Moneypenny? BTW, who is Lovejoy?

I figure we have only a day or too more of viewing before it fades away. I’m tempted to go on a long drive to somewhere really dark tonight.

On show again this morning 🙂

Great photos John and thanks for bringing it to our attention. I will be up early tomorrow to look.

Bec O'Brien - 2 hours ago
It's been closed for a few weeks now. I travel to Dalmeny for work every week from Canberra. Thought it was odd. View
Food & Wine 112

Lillie Rudland - 8 hours ago
David Rudland just say when! View
Jody Kisbee - 12 hours ago
Sounds like a plan View
Jodie Roberts - 13 hours ago
Julia McFarlane what are you two up to this weekend? This looks lovely View
Opinion 34

Matt Henry - 12 hours ago
Allison Jay if she says that then u could only blame boring parenting. Canberra is a great place to bring up kids ans live. View
Allison Jay - 2 days ago
Kat Rothwell haha yes indeed View
Sport 5

Border_Libran - 16 hours ago
Hi A_Cog, I’ve just found your comment, if you still reside at Oaks Estate I would be interested in contacting you, I was p... View
Breaking 1

Capital Retro - 16 hours ago
How unlucky is this dude? I mean, it's hard to even spot a police car in Canberra let alone hit one. View
Property 15

Harley Quinn - 17 hours ago
Canberra has NEVER been a peaceful city. I was kidnapped in 1993. It's nice that some people still have that illusion though. View
Business 18

Bob Jones - 1 day ago
Deb Wheare And Lynne Meredith... I've heard because of the more right someone who identifys as being an Aboriginal or Torres... View
Kev Martin - 1 day ago
I find If you stop breaking the law, you don't get locked up View
Community 12

russianafroman - 2 days ago
Will probably laugh at the annual Twitter meltdown, if there’s a protest maybe I’ll go and see what happens, hopefully th... View
Capital Retro - 2 days ago
Unless there is a new law directing me to go somewhere and do something I will be staying home and counting my blessings. At... View
Food & Wine 9

Megan Buckley - 2 days ago
My 84y.o. Dad; and I are the pair of regulars mentioned at the end! We were Burn's regulars back when they were famous for th... View
Property 1

@The_RiotACT @The_RiotACT
Stories about Summernats, snakes, Skywhale & a new venture from the team behind Bombolini doughnuts all featured among the top stories on the RiotACT this week. Catch up with our latest newsletter https://t.co/4JyEruj9tg (11 hours ago)

@The_RiotACT @The_RiotACT
Eleven years after he was first drafted into the AFL while still at Erindale College, Jason Tutt is returning home to Ainslie Football Club https://t.co/0D5tHBFya1 (12 hours ago)