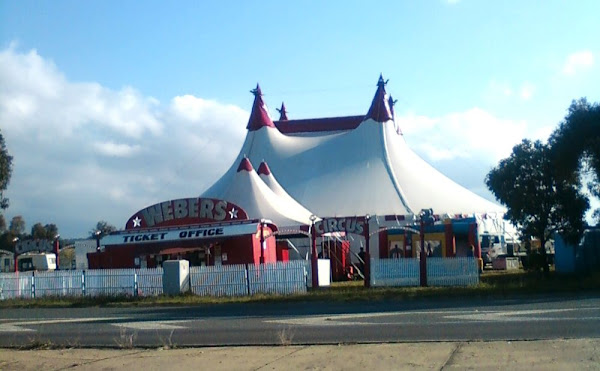 So “Webers Circus” popped up out of no where the other night at the intersection of Ginninderra Dr and William Slim.

Going by the times on the sandwich board it’s first performance is this evening but is anyone else concerned by how close the ticket office is to the edge of the highway?

UPDATE: Damien Haas has sent in a picture.

Loved the circus. Well done, kids loved it and the animals are happy! Who cares where they set up? Make the most of the spare land before it gets built on!

The circus is several km from William Slim, it is in Charnwood, closer to Tillyard.

Did you even read the main article???

Was that the same mob that was in tuggeranong earlier in the month?

Indeed it is, and once they leave charnie theyre setting up next to Lake Ginninderra.

Hopefully a B-double’s airbrakes don’t fail at the end of William Slim Drive. Stupidest place I’ve ever seen a circus.

The circus is several km from William Slim, it is in Charnwood, closer to Tillyard.

In related news, I saw a posted up for a ‘real circus’ with animals in Qbn coming up soon, for those who like the real thing.

Hopefully a B-double’s airbrakes don’t fail at the end of William Slim Drive. Stupidest place I’ve ever seen a circus.

It is a well-known fact that clowns are evil.

I support the ACT ban on circuses with wild animals performing too. They’re as cruel as hell, those flashing ads to do something about dancing bears etc in India might as well apply to the average circus. I’d hope that the RSPCA is keeping an eye on the way those horses and dogs are kept and trained as well. Carnies are a hard bitten lot.

I for one am totally against circuses – especially ones with animals. The sheer cruelty that is exposed again and again makes me feel appalled that they are still allowed to perform in Australia.

I for one am totally against circuses – especially ones with animals. The sheer cruelty that is exposed again and again makes me feel appalled that they are still allowed to perform in Australia. Of course not all circuses are cruel to animals, but the number of circuses that are, especially against elephants, makes me believe wholeheartedly that we should not be exposing children to circuses with animal acts.

Plus they have scary clowns 🙁

He also said that they were restricted to two TV commercials a day and felt that the local Govt were “anti-circus”.
.

Anti-circus, anti-motorsport, anti-public transport, anti… well pretty much anything that might be enjoyed by the blue collar belt of Stantopia.

I struck up a conversation with one of the Weber’s staff who advised that they had a tough time being permitted to perform in the ACT at all due to the animals (Ponies & Dogs) in the show. They were initially denied the permit but had to argue to point (including by pointing out that the Moscow Circus two years ago had dogs and ponies).

After being provided their permit, they were given permission to perform on 3 sites in the ACT being where they have played in the ACT in Tuggeranong (over the road from Bunnings), Charnwood (near McDonalds) and the current location (lakeside Diddams Close).

He also said that they were restricted to two TV commercials a day and felt that the local Govt were “anti-circus”.

It’s a shame if we’ll end up having to go to NSW in the future for these shows.

Having a look in the legislation and the regulations, I can’t see what the problem was. There is no evident cruelty that I could see with the performing ponies and dogs. (Certainly when you compare to things like the local racing track or Canberra Show which I do no have a problem with whatsoever)

Was that the same mob that was in tuggeranong earlier in the month?

It sounds like a very dangerous environment for kids. You should play it safe and keep them at home so their cotton wool stays nice and clean.

They have been at the oval opp Charny Maccas for a couple of weeks now. Maybe they got woken too early by all the shoppers…..

The ticket booth faces Ginninderra “Highway” for advertising exposure. They might be carnies, but they’re smart enough to realise that facing a 5 metre illuminated sign towards an arterial road is good promotion. For the alarmists amongst us, fear not as the ticket booth is at least 15m from the edge of the road.

Nobody needs to cross Ginninderra anyway, as parking is accessed from Diddams Close.

or parents could make sure they keep a hold of little kids and a close eye on their bigger ones.

It sounds like a very dangerous environment for kids. You should play it safe and keep them at home so their cotton wool stays nice and clean.

Its a funny place to put them, but I wouldn’t hold that against them.

I’ve taken my family to see them twice since they’ve been in town (Tug + Charny). It’s a really really good show.

Rob Thomas - 3 minutes ago
I walked into the street, the on coming traffic was about to strike me, luckily I decided I'm physics blind. View
Richard Orchard - 15 minutes ago
So only white people can be racist right? It’s the white people who have to read this article, and repent I’m assuming? A... View
Peter Marshall - 33 minutes ago
I that's entirely fair, but I think the issue of racism is primarily about the dominant culture/ethnicity. In Australia that'... View
Community 3