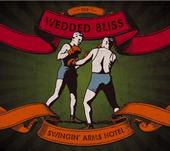 The following in from stalwarts of the local music scene, The Wedded Bliss:

Yes , we’ve been badgered into having an ‘official’ CD launch to celebrate the release of our 2nd Album, ‘Swingin’ Arms Hotel’. We’d love it it if you’d come and hang out with us, drink with us, and listen to some tunes. There will be a a bit o’ country, bit o’ blues, bit o’ banjo & fiddlin’ and lots of good ol gi’tar to go around….

Go to: www.myspace.com/theweddedbliss for details and song samples….”

UPDATED: The swag keeps rolling for our Premium Members. Randall Blair of the Wedded Bliss has kindly offered two free tickets to the launch. Premium Members need to email root@the-riotact.com by COB Thursday to express an interest as to being in the draw, be sure to include your userid.

ANOTHER UPDATE: Congratulations to Bloodnut who has won the tickets and will be swilling the cheap and loverly zywiec beer from the big big bottles.

One of the best locally produced albums with start to finish listening value that I have heard in aaaaages.

I lent a curious colleague a copy – and now he’s not giving it back.

Steven Campbell - 41 minutes ago
Reducing posted speed limit is simply government’s way of running away from their responsibilities. Laws are only as effect... View
Opinion 11

Capital Retro - 47 minutes ago
Nailed it. View
thebscaller - 9 hours ago
So what have you achieved other than self promotion? A message from someone saying that the only hope they have is for a libe... View
Mark Parton MLA - 12 hours ago
Thanks for constructively engaging, but I would reject the characterization of my advocacy for Alex as a media stunt. And I w... View
Opinion 71

Capital Retro - 48 minutes ago
Spot on. What goes on behind the scenes is usually at odds with the "clean & green" propaganda we hear. Just like a wind "far... View
George Watling - 9 hours ago
These things also generate vast amounts of e-waste and carbon pollution. Studies show they last about 9 months before they ar... View
Business 21

Neil Thompson - 53 minutes ago
Andrew Turnbull, great bloke to get on the piss with as well. View
Trevor Hicks - 1 hour ago
About time 👍 View
Jess Puddick - 3 hours ago
Kimberley love it, so excited for it to be restored! View
Opinion 11

Shane Westmore - 9 hours ago
Absolutely. There’s people voting now who are completely misinformed about anything going on in this country & waste their... View
Nada Krstin - 11 hours ago
oops, meant to say, cannot have it one way! :)... View
Nada Krstin - 11 hours ago
No. And if you think they are mature enough to vote at 16 or 17, then they should be tried for any crimes as adults as well,... View
Opinion 94

George Watling - 9 hours ago
Marc Edwards Spot on Marc. The best way to deal with congestion is decentralize workplaces. If everyone is travelling to a ce... View
Property 1

George Watling - 10 hours ago
Sadly when and if the governments changes to the residential zoning laws come through this place will be torn down and it blo... View
News 11

ACT resident - 10 hours ago
It is unrealistic for the Canberra community to pay for a company’s poor commercial decisions. The risks for CRS, newly reg... View
HiddenDragon - 14 hours ago
"...Capital Recycling Solutions, is in early talks with the government about its costs. It is hoping for an agreeable settlem... View
Lifestyle 1

Kat Lindbeck - 11 hours ago
Lucy that’s great. Best of luck for the future and an International career View
Community 8

@The_RiotACT @The_RiotACT
Captains Flat Road will get a much-needed $10 million upgrade over the next four years as part of a capital works program in the Queanbeyan-Palerang area https://t.co/2zPIjg1tc5 (27 minutes ago)