Well Robyn, Thanks for the Mammaries 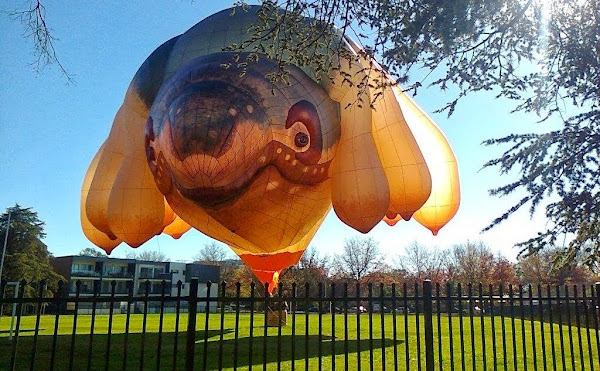 So Tittycarp made it onto Cracked people:

Australia is home to species upon species of unusually terrifying animals. So it’s unsurprising that, during their leisure time, Australians wile away the hours inventing critters too horrid for reality.

What in the name of Paul Hogan are we talking about? Meet The SkyWhale. According to Australian artist Patricia Piccinni, this hot air balloon is a commentary on the wonders of evolution. And according to a lot of people, The SkyWhale looks like an 111-foot-wide, 75-foot-tall dugong fetus wearing a Rastafarian wig made of tits.

It’s understandable how The SkyWhale throws bystanders for a loop — after all, even the most cleavage-obsessed horndogs don’t want freaky disembodied mammary zeppelins to wear the face of that wrinkly giant tortoise from The Neverending Story.

But The Skywhale has riled Australians up on a whole other level. After this breast beast debuted this past May to celebrate the centenary of the Australian capital of Canberra, it came to light that The Skywhale cost taxpayers somewhere in the neighborhood of 300,000 American dollars.

Advocates of The Skywhale have argued that $300,000 is a bargain for a piece of public art, but, come on — the organizers had to have seen this controversy coming from a mile away. Were they familiar with Piccinni’s other sculptures?

[ED – Truly the best thing the Centenary has done, and for just $300,000. I am, however, gutted the skywhale hat didn’t get a guernsey

3 Responses to Well Robyn, Thanks for the Mammaries
Filter
Showing only Website comments

Thought that they headline was about “That 70’s show”. Appropriate either way.

Truly the symbol of how bad the Centenary organisation and events have been.

What a shame they didn’t use a certain picture of a certain moderator wearing his Skywhale hat. That was vaguely scary!

Dot Thompson - 35 minutes ago
Hannah Tracey, is this for or you and Tom? View
Jessica Adams - 3 hours ago
Chichi Rojasrivaplata Winikerei I mean if we can afford this place I’m sure we can afford some help 😂 View
Chichi Rojasrivaplata Winikerei - 3 hours ago
Jessica Adams does it come with a maid 🤣🤣🤣 man I ain't got time to clean that 🤣🤣 View
Opinion 34

John Vallance - 13 hours ago
Lucas Anasdow um.... because like all vaccines it goes through testing. once testing and trials and results are reviewed then... View
News 2

Brent Carlisle - 15 hours ago
I was shearing in the 1980’s and we where talking about how bad the conditions where then and nothing has really changed. View
James Tartarus-Gibson - 15 hours ago
Patrick Honeysett you and I will get a kick out of this 🤣 View
Property 15

Chris Vlahos - 16 hours ago
Should be built alot further back from the monaro highway for future road lanes and traffic expansion if need be. Esp with th... View
show more show less
*Results are based on activity within last 7 days

It's the week before the national holiday that causes division across the country, so it wouldn't be right for me...
News 54

@The_RiotACT @The_RiotACT
The COVID-19 vaccine rollout will be a focus of the ACT Budget this year, which is expected to be around $900 million in the red for 2020-21 https://t.co/czVFKo6XAx (1 hour ago)

@The_RiotACT @The_RiotACT
As the region marks one year since the Orroral Valley fire began, ESA boss Georgeina Whelan says Defence still has some questions to answer https://t.co/yirx3OfKTM (3 hours ago)

@The_RiotACT @The_RiotACT
Even well run, financially strong sports struggled in 2020. Tim Gavel asks: how many community sports will survive if the pandemic continues? https://t.co/WXpu8lWkhu (5 hours ago)