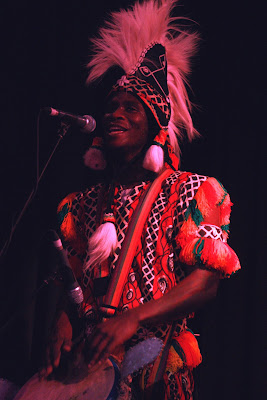 I you like drumming, drumming circles, and all things drums (or just like to have a dance), maybe check out MANDINKA SOUND, a touring show coming to the Street Theatre on July 27 and 28.

On a national tour through regional and metropolitan centres in Queensland, Western Australia, New South Wales and the Northen Territory supported by Kultour, Mandinka Sound is an innovative collaboration from Melbourne-based West African acts, Muhanamwé and One Africa.

One Africa unites Gambian multi-instrumentalist King Marong with Senegalese dancer/drummer/vocalist Lamine Sonko. King Marong has been performing professionally since the age of 12. With his bands Kunta Kinteh, King Marong and Afro Mandinko, King has built a reputation as a master of African drumming styles on instruments such as the Djembe, Boucarabou, Doundoun and Sabar, performing and teaching percussion around the world. Swift, stylish and electrifying, Lamine Sonko hails from a famous Senegalese griot musical family and has performed internationally alongside such greats as Youssou Ndour, Vivianne Ndour and Fatou Nguewel Diouf, and in Australia with his own dynamic group Asiko. Together, Lamine and King Marong create a hypnotic repertoire of original songs which fuse traditional West African culture and contemporary Australian influences.

Through performance and an exclusive drumming workshop in association with Drum Effect on Tuesday 27 July, Mandinka Sound will showcase the depth and beauty of West African culture from traditional to contemporary music, dance and costume.

@The_RiotACT @The_RiotACT
The @NFSAonline has unearthed a rare recording of a @ledzeppelin interview that features in a new documentary on the legendary rock band https://t.co/YSn9EwPTIR (25 minutes ago)