Its creator described lake Burley Griffin as the playground of the city. Photo: File.

Concern about the implications of the West Basin development is probably behind the latest nomination of Lake Burley Griffin and its surrounds for the Commonwealth Heritage List, according to the group that has been battling the proposal.

Consultation on the nomination closed on Friday (26 February), but the Department of Agriculture, Water and the Environment says it cannot say who nominated the lake as this information is not made publicly available.

Lake Burley Griffin Guardians spokesperson Michael Lawson said the group had made a submission and said the nomination was significant as there were so many heritage and planning and development threats to the lake, including the West Basin development, which will eventually comprise multi-storey housing, some commercial operations and an urban park.

Mr Lawson said he did not know who was behind the nomination, but he believed heritage listing would strengthen the arms of community groups worried about development on the lake, and West Basin was probably a catalyst for the nomination.

“West Basin potentially sets an unhealthy precedent for other development around the lake because once it’s done, you’ve got the precedent of having built an urban enclave in the immediate curtilage of the lake,” Mr Lawson said.

He said Kingston Foreshore was a redevelopment of an industrial area whereas the West Basin area had never been built on.

“The 2.8 hectares of lake infill means the lake’s boundaries aren’t sacrosanct anymore, that other areas of the lake could be infilled for the purposes of development,” he said.

This included areas in the Parliamentary Triangle near the proposed light rail line, Acton Peninsula, and Lotus and Yarralumla Bays.

“We look at any vacant land in Canberra and ask, ‘are the developers already looking at this?’, because that seems to be the [ACT] government’s view – that any block of land is a potential development site,” Mr Lawson said. 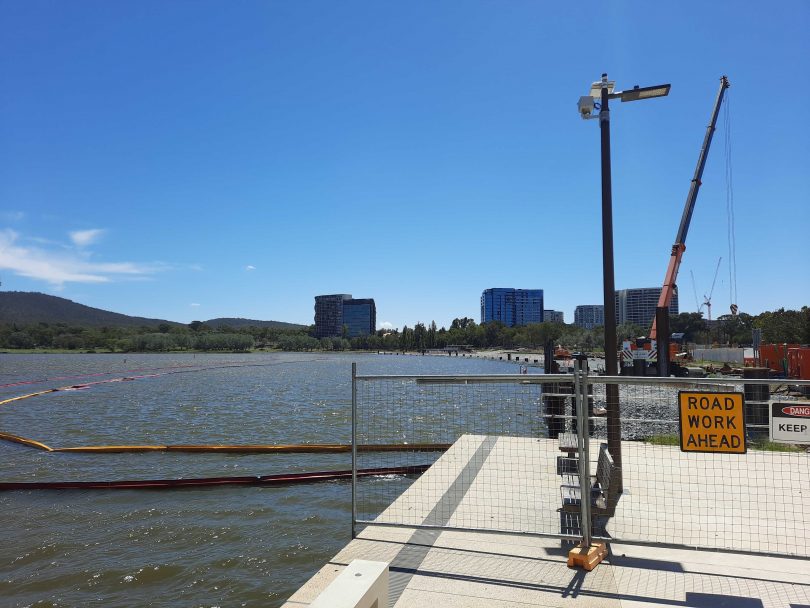 The Guardians also had concerns about the consultation process and the lack of information about the nomination.

“We would have thought there should have been a national campaign because it’s a national issue. It’s not just a Canberra issue,” he said.

Lake Burley Griffin and Adjacent Lands, which consist of the lake waters and land under Commonwealth custodianship, underwent an assessment for the Commonwealth Heritage List in 2010.

The Guardians prepared and submitted an emergency nomination to then Heritage Minister Josh Frydenberg at the beginning of 2018 under the emergency provisions of the EPBC Act, covering the Lake and its lakeshore landscape, but it was rejected.

That year the UNESCO-linked International Council on Monuments and Sites (ICOMOS) called on the ACT Government in May to stop work on its West Basin proposal.

The ACT National Trust, which has also been critical of the West Basin project, also made a submission on the new nomination, saying Lake Burley Griffin is an essential part of what defines Canberra.

READ ALSO: Canberra’s construction boom will be a high-wire act

Its submission says the area is a key element in Walter Burley Griffin’s plan for a city where the most important institutions and national buildings are placed.

“These unique heritage assets have aesthetic characteristics and are of great social and cultural value to the nation and Canberra,” it says.

The submission says its central location offered Griffin the opportunity to create one of the world’s great central parks described as a ‘playground of the city’.

There is no set time frame for the nomination to be assessed, but it is hoped a decision will be made within 12 months.

But will this stop the government’s idea that the Lake can always be filled in to build more apartments?

You do have to laugh at these self appointed “guardians”.

Trying to prevent development around a 50 year old man made lake.