What are they doing to our Chief Minister at COAG?

This picture, taken at the Hyatt Hotel Canberra, adorned the front page (above the fold!) of Friday’s Australian (03-JUN-05): 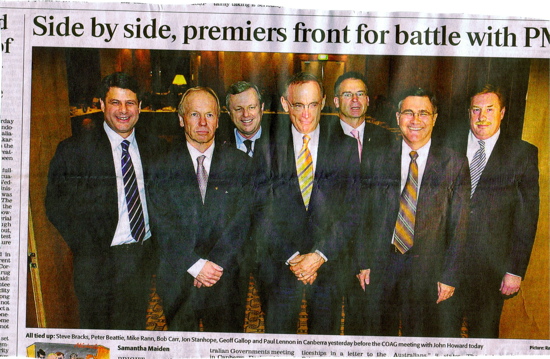 The various smirks and poker faces of the other State leaders does make one wonder if they’re having a joke at our Chief Minister’s expense. Certainly Mr. Stanhope appears to have been caught at an uncomfortable and surprising moment.

Crikey’s Daily contained the following theorising [Disclosure: I was partially involved in the creative process that lead to this piece]:

Despite appearances on the front page of today’s Australian, ACT chief minister Jon Stanhope has reason to be pleased as he joins his fellow Labor leaders at COAG: he’s secured himself a $25,000 pay rise.

It appears ACT pollies have made off with a larger motza than their federal colleagues, who recently received a relatively modest rise, courtesy of the rumeration tribunal. The Toytown pollies have received a pay rise of around 20%, brought to our attention by political blogger Mr Grumpy.

Which makes the government’s support of Greens MLA Deb Foskey retaining her public housing unit even more of a sick joke. Not that you’d discern it from this glum media release put out yesterday by the ACT government.

Chief Minister Stanhope complains his salary is “still significantly below the basic salary rates of parliamentarians in most other Australian states and territories.” He whinges: “The salary of the ACT Chief Minister is still lower than that of every other state and territory leader bar one.”

Which raises the question: who is now Australia’s lowest paid political leader â€“ and how does he feel about it? For a clue, study the COAG photo on the front page of The Australian, and check out who appears to be giving Stanhope an old-fashioned wedgie. Can you see Paul Lennon’s hand? Neither can we.

Is it a wedgie? Does anyone else have any other theories or explanations?

4 Responses to What are they doing to our Chief Minister at COAG?
Filter
Showing only Website comments

The Chief could have fallen foul of the good ole school boy grip – this photo just so smacks of schoolboy yard hierachy.

Its Interesting I was having a beer in the Wig & Pen on friday night. And who should walk passed the bar and out the door from the back of the pub. Steve Bracks carring a brief case and with a minder. I didnt see him having a beer but can only assume thats what he was doing. It was about 7pm I think

Is it any wonder that Bob Carr is the centrepeice of this photo and our fearless lunatic is the furthest away from the camera?

Martin Bradley - 10 minutes ago
The way I see it, you shouldn't have to pretend that different races and cultures don't exist, you're allowed to recognise th... View
Salima Haidary - 14 minutes ago
Sorry. but who is Zoya Patel ?? View
Martin Bradley - 17 minutes ago
In what ways do you treat someone differently that you meet based on their race? View
What's On 8

Susan Peachey - 58 minutes ago
Yes. But make it voluntary until 25. View
Jo Hann - 4 hours ago
Nada Krstin if you pay tax, you should have an option to vote for the government that spends it. It's not about being "adult... View
Nada Krstin - 11 hours ago
Julie Macklin copy that, all taken onboard - welcome all feedback - only way I will learn :)... View
Opinion 17

Chief Minister rules out any development on City Hill