What is the future for the PM’s XI? 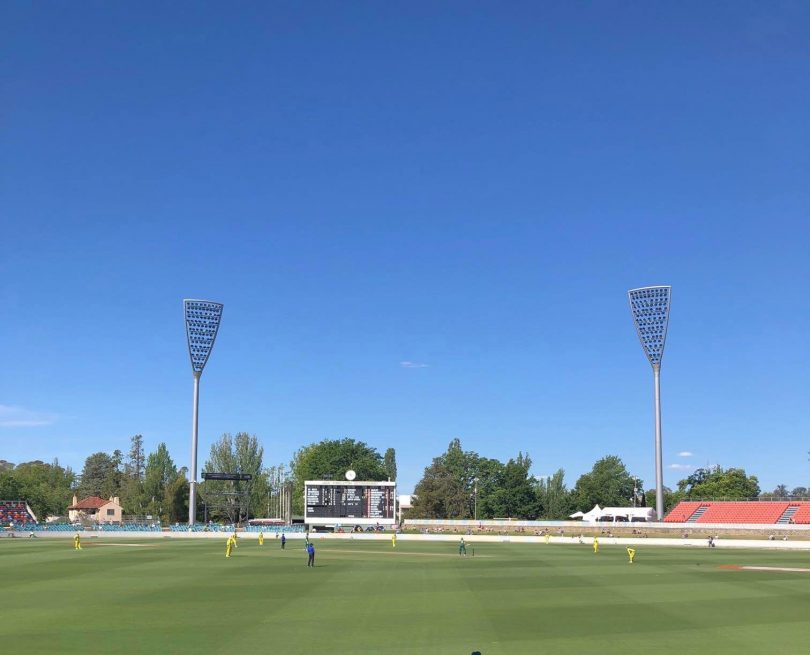 Many cricket pundits have already given the PM’s XI concept the last rights after just 1,824 people turned out for the game against South Africa at Manuka Oval.

Personally, I think the annual match still has a future in Canberra with the belief that this year there were many contributing factors conspiring against the game attracting a full house. To start with, who knew the game was on apart from 1,824 people in Canberra? There appeared to be very little hype or promotion surrounding the game. There wasn’t even the traditional build-up around the selection of the captain, the team, or which (if any) Canberra players would be selected, and the follow-up outrage if no Canberra players were selected.

To say there needs to be more Canberra-based promotion of the fixture is a massive understatement. It is supposed to be an annual event, yet the PM’s XI had already played against England in February this year at Manuka. This could have caused some confusion.

Cricket’s officialdom can’t work out if it is to be a one-dayer, a day-nighter, or a T20 game. I get the distinct impression that the fixture has, at times, become an afterthought with administrators finding it hard to find a time slot in a crowded calendar.

And speaking of a crowded landscape, there is so much cricket coming up in Canberra in the next four months that quite possibly people who may have attended the PM’s game may be keeping the powder dry until the two men’s and women’s Big Bash games and Canberra’s first ever men’s test match take place in February.

It may be that the PM’s XI was simply a victim of an oversupply with ticket sales for the Big Bash and the test going extremely well. The elephant in the room is, of course, the off-field malaise in the sport which has diverted focus to some degree away from the sport.

There are plenty of reasons why only 1,824 turned out to watch the PM’s XI play South Africa. The key to ensure the future viability of the game is to ensure first and foremost that people know the game is on and that the fixture itself has meaning and not and perceived as an inconvenience in the scheduling.

It would be good if someone told us it was on.

yep didnt know it was on

Didn’t even know it was on this year. Miss the traditional format.

The recent women’s ODI was poorly crowd-supported too.

Parking is a problem. Perhaps promote buses to the oval. One lane of Canberra Avenue was closed causing bedlam. No reason to close the lane, overkill. And, promote the event.

...because the powers in charge of this match are probably actively trying to kill it as a viable game played in the nations capital so they can move it to Sydney (or Melbourne) to be played 😠😠😠😠

Love the PMs XI simply had no idea it was on. Plus having it on a Weds and Halloween meant it wasn't a goer for families.

Mark Johnson - 9 hours ago
Belinda Makrides don’t think it would make a difference. Toyota have a pretty good rep no matter where they are made. The H... View
Mark Wallin - 10 hours ago
A car you operate rather than drive. View
News 42

doomattheend - 9 hours ago
Good to see the Greens MLA attacking a private school for a federal issue rather than keeping the labour party in check. Of c... View
Opinion 43

Kalo Arepo - 11 hours ago
Also in cases of bushfires gum trees explode like bombs whereas many species of exotic deciduous trees are fire retardant-thi... View
show more show less
*Results are based on activity within last 7 days