What manner of monster is this? 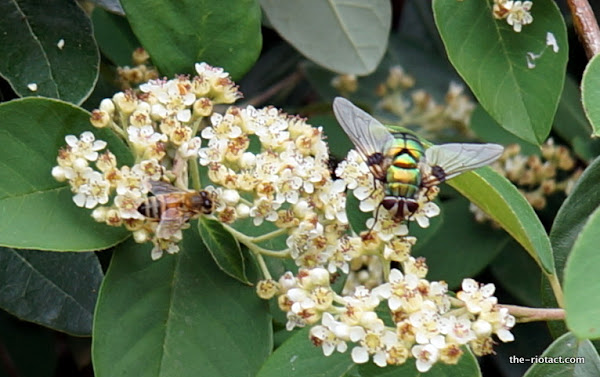 I’ve just been more than a little horrified to discover these monsters lurking in the cottoneaster in O’Connor.

I’m assuming they’re a pair. There’s a bee in the first shot for scale (and it was a big bee) can anyone advise what these brutes are? 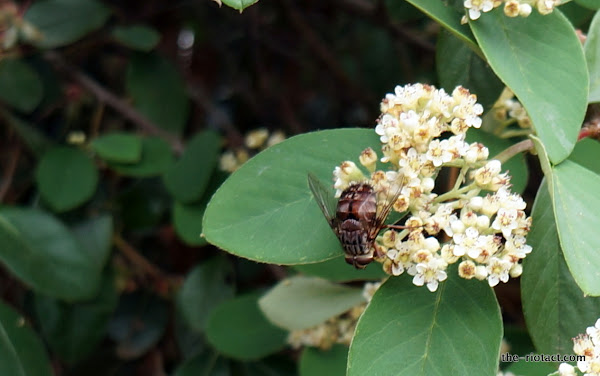 Tags ask riotact what bug is that?.

14 Responses to What manner of monster is this?
Filter
Showing only Website comments

These guys don’t fly fast (compared to regular fly), you can watch them motor around and the buzz they make is really loud and distinct too. Haven’t seen one in a while but I guess as an adult you stop noticing things like this.

You’ve photographed a Golden Head Rutilia fly – Rutlia (Chrysorutlia) imperialoides – which is part of the Tachinid family of flies, whose remarkably fat and mobile maggoty children eat the insides out of beetle larvae while they’re still in the soil, especially big scarab beetles, Christmas beetle larvae etc. The one in your second photo is a Brown Rutilia Fly (same Genus). There are also iridescent blue-black Rutilia flies, some with iridescent spots, and other more drab ones (and smaller ones too).

But many Rutlia are indeed very large, as you seem to have noticed – up to 25mm long sometimes. Some even have beautiful iridescent spots on them. Unlike other large-ish blood sucking horse flies and march flies for example, adult Rutilia flies are designed to suck up nectar. Cotoneasters do attract them as you’ve noticed, as do photonias (for the few early hatching flies), teatrees, viburnum, and certain other trees. I’ve also seen them on wax-flowers, rosemary, daphne, and westringia, and sometimes hiding on knobbly barked gum trees, on hot days, in the shade.

If you can get a good super close-up macro lens, they’re well worth watching for, in the right light, but they have big eyes and tend to see you coming from a long way off , I guess because they are a useful and sought-after feast for wagtails and swallows and dragonflies and robberflies. I don’t know if they taste very nice to people and I haven’t tried one. They fly very fast – I expect they can outpace most predators, with sufficient warning and don’t fly in very straight lines, despite their significant momentum. The green and brown ones you’ve seen are endemic to our part of the continent.

The top one looks like a green bottle fly. Not sure about the bottom one. Maybe the females are brown?

HHR is on the money- its def a Green Bottle fly.

How did it taste?

Military UAVs. The top one looks like USAF… The bottom is probably a cheap Chinese clone

The top one looks like a green bottle fly. Not sure about the bottom one. Maybe the females are brown?

from my reading it’s way too big to be a lance fly and the wing is wrong?

They’re for the new aircraft carrier.

Maria Greene - 7 hours ago
Frank Valzano yeah but how would Brendan or pollies benefit? View
Frank Valzano - 9 hours ago
Use the money to provide mental health support for current and former soldiers suffering from PTSD.😡 View
Lifestyle 2