Whatever “it” may be Super Best Friends want it dead. They get what they want

Super Best Friends are the band with everything.

They’ve got a very sharp new video (above).

Sydney-based Reckoning Entertainment has sent us a media release about Super Best Friends which tells us not once, but twice that they are “killing it”. (for an unspecified value of “it”).

They’ve got quirky band photos and a poster! 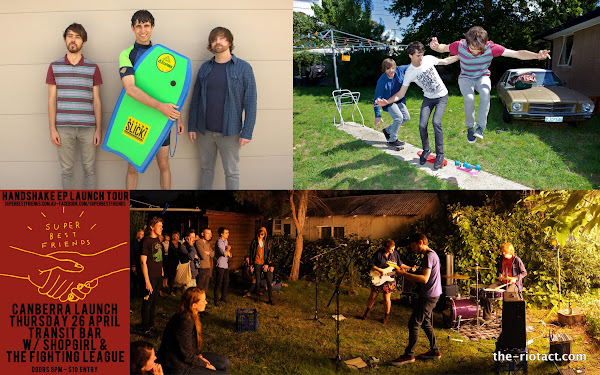 And they’ve got an upcoming CD launch at Transit with a killer lineup (for the killing of “it”):

We’ve confirmed our line up for the Canberra launch of HANDSHAKE on Thursday April 26 at Transit Bar.

3 Responses to Whatever “it” may be Super Best Friends want it dead. They get what they want
Filter
Showing only Website comments

I’m with these guys. Kill it dead.

I have all their albums… as yet still alive.

How much for the HQ Kingswood in the background?

Joshua Grech - 7 hours ago
David Rees Oh, interesting. There are others. Thales etc View
David Rees - 7 hours ago
I think you will find it did, has got out of trains now. View
astro2 - 7 hours ago
Doesn't need to be high speed, just higher speed would do. The most recent proposal featured very little changes beyond a bit... View
Community 8

Justin Sev - 7 hours ago
Is that the same Tom Morrison who played junior footy for the Rams ? View
Community 5

chewy14 - 9 hours ago
Perhaps you can link to actual scientific research or investigations showing this particular proposal will cause health issue... View
Capital Retro - 11 hours ago
The residents of Conder and suburbs to the south should worry about this proposal as the standing inversion layer that plague... View
News 9

chewy14 - 9 hours ago
BJ, There are still peak hour buses from Tuggeranong to the city using the Parkway. The problem with this road and the future... View
JC - 9 hours ago
The parkway does cope now. Sure it gets congested but roads are designed for an acceptable level of congestion. What is accep... View
bj_ACT - 10 hours ago
Who would have thought that taking buses off the Tuggeranong Parkway and also making peoples peak hour bus commute from Tugge... View
Courts & Crime 2

chewy14 - 9 hours ago
Not really. You don't get to break the law simply because you don't like it. And the attempts by some to paint this as a "whi... View
News 3

Mothers and children are being forced to sleep in their car as access to emergency housing in Canberra reaches a...
Business 40

The major shareholder of Public Bar in Manuka and the founder of Canberra's largest accounting firm, Walter Turnbull, has taken...
Food & Wine 26

@The_RiotACT @The_RiotACT
After widespread criticism during its trial, a revamped ChooseCBR scheme is relaunching on 9 June with greater discounts and more eligible businesses https://t.co/cUp2u542PQ (5 hours ago)

@The_RiotACT @The_RiotACT
How Canberra's elderly navigated the COVID-19 pandemic is taking centre stage in the debut performance of the Pandemic Players and their production, The Titanic 2020 https://t.co/L7ipOiWjDe (5 hours ago)