Experts in buying, selling & renting
Your property, your future
3 July 2017

When the Greeks fed Goulburn, and taught us to dance 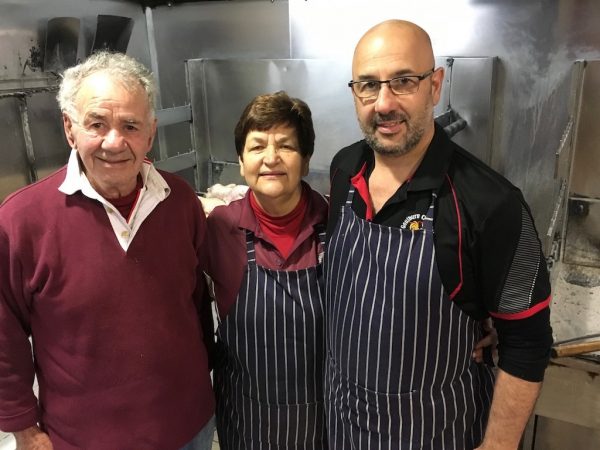 Tradies have been working seven days a week finishing new shops for a fast food splurge in Goulburn. Nationally branded, well organised and located (sometimes under a hideous sign), franchises will turn the heat up on traditional cafes.

But they will never feed or entertain Goulburn the way Greeks once did.

Remember the Bon Ton? The Blue and White Cafe, the Radnor and Danny’s Brasserie, which opened on the site of the original (and now famous) Paragon Cafe? Danny’s founder Paul Stamatellis can reel off numerous names, beginning from his father George’s Blue Dolphin Fish Cafe.

They opened as steadily as traffic rolled into town before the highway bypass. There was the Florintene and Acropolis cafes, Continental Milk Bar, Green Valley, and George Diakoumis’ Monaro Food Fair, the Park View Cafe, Goulburn Restaurant and Green Valley Cafe.

Fifteen years ago the late Dr Brian Keating declared the 147 Restaurant the social centre of Goulburn in its day, the first choice for families and courting couples. 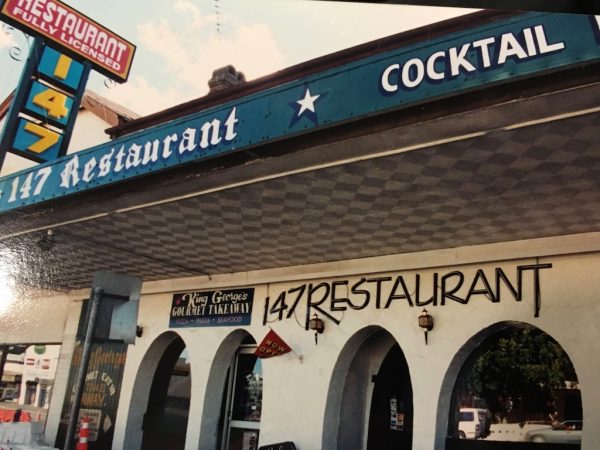 The 147 Restaurant with arches on the exterior. Photo: Drakasis family.

Georgina and Manual Drakakis came from almost nothing to dominate the restaurant scene from the 1970s to the 1990s. Butchers, wool buyers, car dealers, hoteliers and stock and station merchants and their followers kept the Drakakis family serving food, wine and coffee into the early hours. Now almost 80 and still preparing food in his son George’s Charcoal Chicken Cafe and Restaurant, Manuel was head chef. Georgina was the front-of-house hostess.

“Friday nights, people knew each other and would go from one table to the other, they talk,’’ says Georgina. I was fortunate to not only own a restaurant but to live in those years, because you can’t find anything like that anymore.’’ Georgina arrived in Australia as a reluctant 18-year-old. Her childhood had been a struggle. “I live with very nice people, very educated, love what I was doing. But my family suffer in a village, there wasn’t much around. My aunty say you go, and then you come back.’’ Georgina arrived in Australia in 1962, never to return, except for holidays.

While living in Sydney, a cousin who was her sponsor to Australia, took her to a soccer match where she met steel worker Manuel Drakakis. They married and later came to Goulburn, where their 147 Restaurant became a social institution.

Georgina and Manual and their two sons Chris and George were one of three families who lived above the original 147 Restaurant next to the Hibernian Hotel.

They relocated to the Toparis family’s Corinthian Mall. Then in 1981 they moved to where their son George owns charcoal chicken today.

On this site they had renovated the previous tenant’s wine cellar and tasting room, and extended out the back to seat hundreds of diners. Numbers grew steadily. Ursula Stephens organised a big party once with 220 guests including Margaret Whitlam.

Butcher Bill Murray and his son John, a meat wholesaler, were inseparable at the restaurant, sharing a table down the back with friends. “They nearly lived there,’’ Mr Murray’s daughter Toni Kennedy says.

Manuel began preparation for Saturday nights by putting 140 potatoes in the oven at 6 o’clock. “We did three sections with 150 people, the first at 6 o’clock, then 9 o’clock and the latest, about quarter to 11,” Georgine says. The last sitting would include the Hotel Gorton’s Robert Bowerman, his mother Jean, Marshall Piggott and their friends.

“One night we have Greek dancing and I wanted to go. They come in 20 to 11,” Georgina says. “Marshall Piggott always had grilled snapper, and he liked to eat the head and take his time and here I am waiting to go to the Greek dancing, so when he reached the head I went up, I say Marshall you don’t eat the head tonight.

“Say what!” Marshall said in surprise.

“I say you don’t eat the head tonight, go down to the Greek dance.’’

Georgina turned to about 20 other people in the restaurant and invited them all to the Phillip Court Hotel for Greek dancing. “It was a beautiful night, but I have to laugh, Jean Bowerman comes dressed casually. At the Greek dance everyone dressed up. She always said (afterwards) I have my fur coat in the cupboard and dresses, and here I am going to the Greek dance in a cardigan.

“What a beautiful night. We used to have 400 people there when we have Greek dances.” 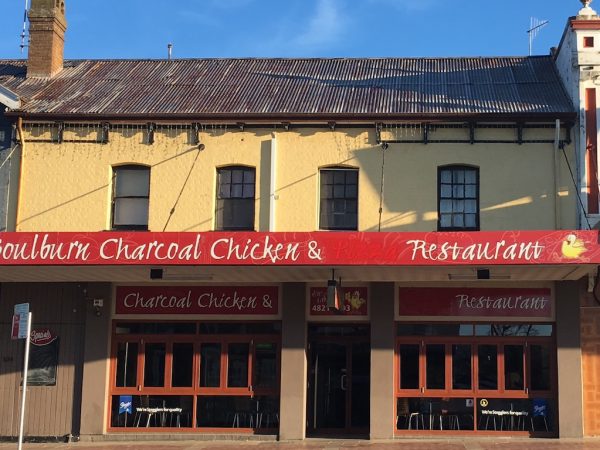 The Phillip Court retained the former Odeon picture theatre’s ornate room upstairs for functions. Paul Levantis was the dance leader with the hankie.

Paul Stamatellis says Greek bands came from Melbourne and Sydney, and when the Phillip Court was demolished the dancing relocated to the teachers college.

On other occasions people partied at the 147 Restaurant until 4am.

“Gus Cooper came here for 30 years, never missed Fridays, came to the same table and he died 1984,” Georgine says. Other regulars were the Maple Browns, Maas brothers and Ray Holgate. Rostrum and Soroptimists met there.

In the late 1990s, when regular customers either died, left or grew old Georgina and Manual leased the restaurant. George left for Camden where he met his wife Janelle and worked in a charcoal chicken cafe.

“When George left I missed him terribly. When he came back (to Goulburn) and said he wanted to do this and that, I thought I had won the lottery,’’ Georgina says.

What a beautiful foodie yarn John! Some of these old ethnic restaurants and cafes should be heritage-listed and the menus preserved for the benefit (and appetite/health) of future generations!