Who the hell is shooting our swans? 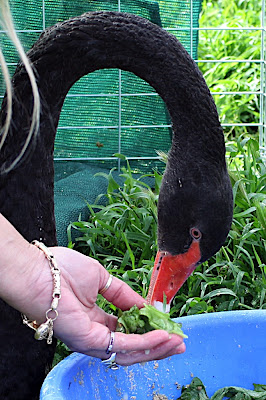 The RSPCA is up in arms over the tragic death of Victoria the swan.

Having spent 10 months rehabilitating her from an earlier injury it’s sad that a month after her release she was shot and then town apart by a dog.

Which does beg the question: Who the hell is letting off guns on the shores of Lake Ginninderra?

14 Responses to Who the hell is shooting our swans?
Filter
Showing only Website comments

This past dew weeks, we’ve had shootings, arsons attacks and robberies a plenty. Every single night for two weeks, sirens have been heard in the Lanyon Valley, often more than once a night. What’s going on?

Living in ‘the Lanyon Valley’ myself I can honestly say I have heard a siren once in the last 2 years!

As for the Swan, yeah that’s bad form shooting one of them, same goes for Pelicans. When I was duck hunting you would often see them getting shot and it was always the greeks and italians responsible and they would cook them up!

Most likely some young punk with an air-rifle so you can dismiss all thoughts of armed maniacs wandering the parks preying on wildlife, true you could lose an eye to one but biggest risks is getting a nasty welt but as they are single shot you’ll have time to grab the rifle off the grub and place it in his bum!

Awful. Canberra is like a war-zone at the moment. I’m all for target shooters but we can’t have so many people running around the streets and lakesides with guns- and firing them? At eachother, at wild-life…

Victoria would have had an awful death. 🙁

How’s shooting the offender going to help the RSPCA? Trainee vets should be allowed to practice surgery on the offender so they can iron out mistakes before they have to do it ‘for real’ with an animal. Any animal would appreciate a vet who has, say, spayed and neutered at least once before, for example.

swans are protected by some special royal law here in the UK.

This past dew weeks, we’ve had shootings, arsons attacks and robberies a plenty. Every single night for two weeks, sirens have been heard in the Lanyon Valley, often more than once a night. What’s going on?

I vote we shoot the offender if they are caught.

And then afterwards we should set a dog on them.

I think it is disgusting how a beautiful swan is target pratice for some idiot getting his jollies, what a sicko!

I vote we shoot the offender if they are caught.

FIVE surgeries on a swan. Wow.

I’ve always wondered whether swan tastes any good. By way of analogy with ducks, I’ve always had high hopes, but I suspect in reality it’d be pretty gamey.

I love the swans on our lakes – they bring a grace and serenity that’s quite the opposite of, say, some dickhead wandering around with a gun.

The RSPCA and Victoria deserve a better end to their story.

Holy f***ing s***. There are children’s playgrounds at that lake. Lovers take long romantic walks there. Joggers go there for exercise. Someone knows an ass with a gun who took it to a city recreational area and used it against a swan. Say something to the police NOW before the human, the dog and the gun go back to the lake!

This just makes me sad. People are arseholes.

Target practice for letting off a few rounds in Hughes maybe?

@The_RiotACT @The_RiotACT
Bogong moths, witchetty grubs and crickets could add more crunch to your cooking according to a @CSIRO report outlining Australia's potential in the edible insects market https://t.co/oevzIJa51X (51 minutes ago)