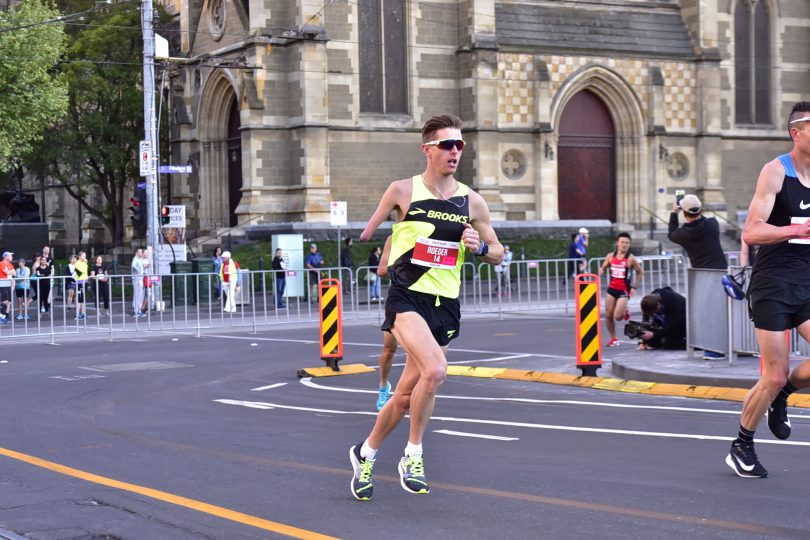 Michael Roeger is the T46 World Record holder for the marathon. Photo: Supplied.

Michael Roeger loves to run. It’s not a chore for him to hit the lake foreshore or the hills around Stromlo each morning. For him, it is a form of meditation as much as anything else.

He is the T46 World Record holder for the marathon. He broke his own world mark in Houston earlier this year, which was a qualifier for the Paralympics.

This was going to be his year. Heading into his fourth Paralympics in Tokyo, he was in red-hot form, injury-free, and the fastest marathon runner in his Paralympic category.

Then COVID-19 struck and the sporting world was thrown into chaos. Events were being cancelled left, right and centre.

One of those events was the Boston Marathon in April, a point-to-point race with a history of fast times.

When Boston was postponed then cancelled, Michael saw it as an opportunity rather than a setback. Following consultation with his coach, Philo Saunders, he decided to run a marathon around Lake Burley Griffin.

“The aim was to see where I was at,” says Michael. “Training had been going well; I felt as though I needed to run.”

And run he did, through the weekend traffic of walkers, runners, cyclists and pets. You name it, they were all on the track around the lake that day.

Michael ran a 2:23 marathon. This is just four minutes shy of his world record earlier in the year.

The cancellation of the Boston Marathon turned out to be a precursor to other major events that would also disappear from the sports calendar. The Olympics and the Paralympics being the most prominent. As a result, Michael was forced to re-set his goals.

“I’m 32 years old. Four years is exhausting enough. It’s mentally tough. I feel robbed of an opportunity to compete in front of my family and friends who had been planning to go to Tokyo this year.”

And at this stage, it’s uncertain whether overseas travel restrictions will be eased, coupled with the possibility that the event could take place in empty stadiums.

That prospect doesn’t diminish his motivation to succeed.

“The desire and will to be better is there, and the goal is to hear the national anthem,” says Michael. Having said that, it is not his primary motivation, as he adds, “medals don’t matter as much”.

More often than not these days, Michael is providing inspiration and motivation to others. He speaks about his journey from being born without the lower half of his right arm, adding plenty of tales about being attacked by a shark or crocodile for dramatic effect.

Despite the obvious disadvantage, his ambition was to play AFL. “Growing up in country South Australia, I ran around the vineyards and farms. I was good at long-distance running but I just wanted to kick a footy around.”

“I’ve been lucky. My twin brother Chris took me under his wing and people around me treated me no differently.”

But it was a visit to his school by six-times Paralympic gold medallist Neil Fuller which opened his eyes to the Paralympics. As a result, he moved to Canberra 11 years ago to train at the AIS.

As well as training on scholarship, he also works as a research consultant at Sport Australia. 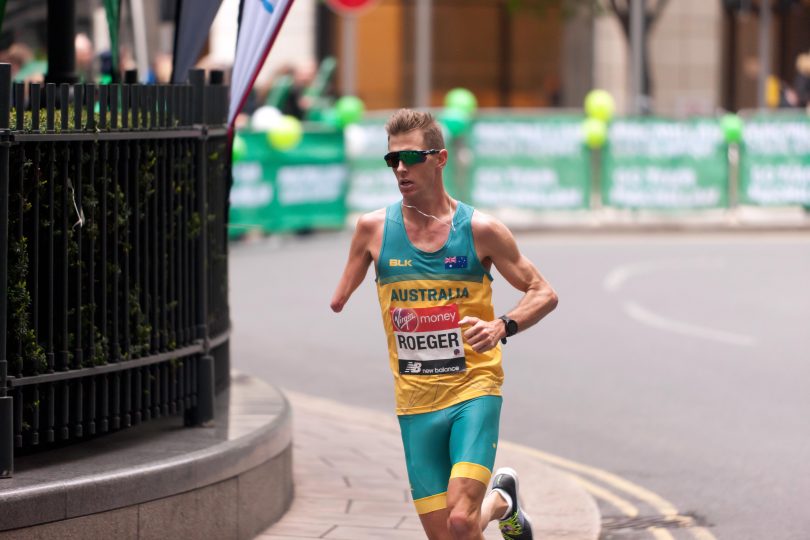 It would be wrong to think that Michael’s journey has been without its setbacks.

Michael almost died after collapsing halfway through the 800 metres at the 2012 London Paralympics. Suffering from internal bleeding in the lead-up to the race, he wanted to compete for his family and the community that had supported him back home. He spent four days in hospital and underwent a blood transfusion to help recover from a gastrointestinal bleed caused by a combination of anti-inflammatories and being in an altitude tent in Cardiff for six weeks on iron tablets.

Today, Michael remains ready to take on anything that gets in his way. And as with most marathon runners, running is cemented into his life.

What a weapon!! That's hard enough on my bikes 🤙👌

Mary Kingsford - 2 hours ago
With the NSW app you sign in and then out. Why with the ACT one is it just signing in? View
Kerri Hallas - 2 hours ago
I got bailed up at the Telstra shop on Friday, telling me it was mandatory!🤨 View
Acton - 4 hours ago
Those who don't get it have never lived in a country where rights and freedoms are stripped away bit by bit while a docile an... View
Opinion 1

Capital Retro - 3 hours ago
Another hundred metres south is the most revenue productive radar speed camera in the ACT. View
Opinion 11

JS9 - 4 hours ago
Since really the design of Gunghalin sadly it seems to have all gone out the door in terms of the poly centric design. View
Capital Retro - 5 hours ago
In what way is Canberra "improving"? We have more social disamenities than ever before with ever increasing rates and taxes a... View
bj_ACT - 15 hours ago
Canberra is definitely improving and cities between about 400k and a million have great amenities without the negatives of ma... View
Property 42

JC - 17 hours ago
What sections of stage 1 are poorly designed and need fixing. As for the traffic lights you gotta be kidding right? As both a... View
Capital Retro - 19 hours ago
Three things to remember about the light rail: 1. The Greens want it. 2. It's all about urban renewal; it was never about pub... View
bj_ACT - 20 hours ago
I think you’ve raised some valid questions. There might well be valid answers from the ACT Government to those questions. I... View
Sport 4

When we first arrived in Canberra in 1995, my boys google-eyed at the grand entry down Northbourne Avenue - the...
News 50

Come on in, the water’s icy – two break the ice on extreme swim record

@The_RiotACT @The_RiotACT
In 1984, two Sydney couples built a mud brick house in the bush at Taralga, and decades later it’s still going strong. Richard Glover has written a book about the experience https://t.co/Kexh33du9v (1 hour ago)

@The_RiotACT @The_RiotACT
The @MoAD_Canberra looks back at the hurdles Australia's first female senator, Agnes Robertson, overcame to get into parliament https://t.co/nozPFfjDwR (3 hours ago)