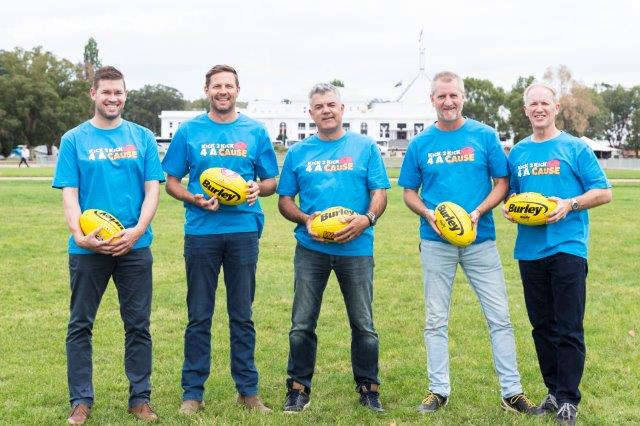 Matt Cooney and his four mates will attempt to kick the footy to each other for 24 hours straight over the weekend to raise money and awareness for Menslink. Photo: Supplied by Kick 2 Kick.

A group of middle-aged men have put their love of footy towards a good cause and will attempt to have the longest ever game of kick to kick in the name of charity.

Matt Cooney and his four mates will attempt to kick the footy to each other for 24 hours straight over the weekend to raise money and awareness for Menslink.

Mr Cooney and his mates were brought together by their love of AFL and 12 months ago came up with the idea of doing something to give back to the community.

“We decided that we wanted to raise awareness for men’s health, and in particular, mental health,” Mr Cooney said.

“With nearly 3,000 people dying by suicide in Australia every year, and 75 per cent of those being male, shows that mental health is a prevalent thing in our society.”

Mr Cooney said that the group thought of no better way to raise money for a local charity than by kicking a footy.

“As middle-aged men all too aware of the importance of men’s health issues, we decided we were going to be part of that community who gives back,” Mr Cooney said.

“What better way to do so than by going back to where our story as mates started; AFL football.”

The event will kick off at the traditional AFL time of 2:10 pm on Saturday (7 April) at the Deakin sports fields in Makin Place. ACT Minister for Mental Health, Shane Rattenbury will also be there to have a kick and will open the event.

The community has been invited to participate with around 140 people already signed up to kick a footy and take a mark.

“Getting 140 men and young men kicking a footy around and to talk about problems is great,” Mr Cooney said.

“There isn’t one problem that can’t be resolved if you find that right person to talk about it.”

Kick2Kick4aCause is aiming to raise $100,000 for Menslink to support important men’s health initiatives and are asking the community for its support.

Click here to learn how to contribute and come down to Deakin sports fields to support a great cause.