Why skin cancer is a burning issue for Canberrans 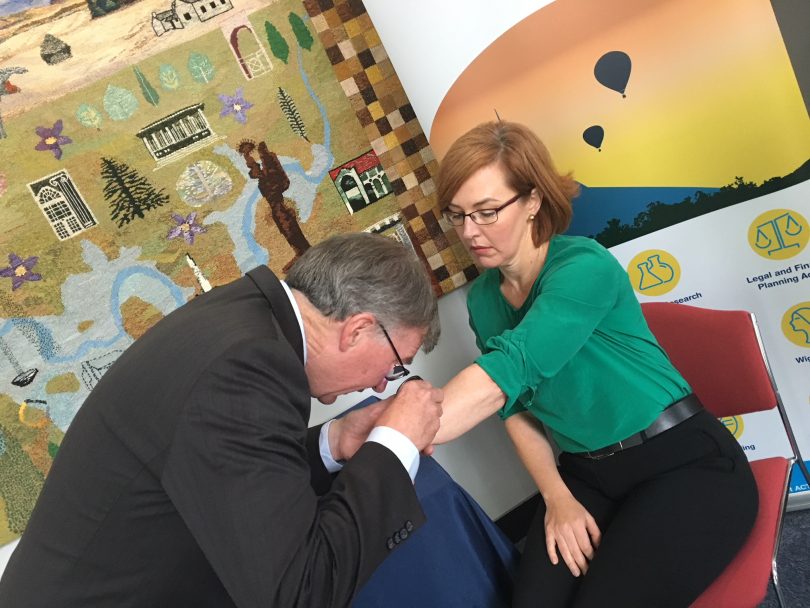 Minister Fitzharris has her skin checked by Dr Andrew Miller at the Assembly clinic. Photo: Supplied.

The heat is about to be on and Canberrans are being warned not to ignore the threat to their skin from the summer sun.

Cancer Council ACT said an estimated 53,000 Canberrans were sunburnt on any given weekend over the summer of 2016-17, according to a recent survey.

Cancer Council ACT CEO Sandra Turner said that Canberra’s weather could be deceptive and people could still get sunburnt on overcast days.

“We take steps to protect our children, making sure they cover up with hats, rashies, sunscreen, and shade, but our recent survey also shows that adults don’t take the same care with their own exposure to the sun,” Ms Turner said.

Minister for Health and Wellbeing Meegan Fitzharris joined the Cancer Council ACT and other local politicians for a skin clinic at the ACT Legislative Assembly to raise awareness about skin cancer.

Ms Fitzharris said the survey results were an important reminder to all Canberrans of the importance of regular skin checks, and to ‘slip, slop, slap’.

“As we head into summer, families will be spending more time outdoors. These survey results highlight that sun safety needs to be front of mind for the community,” she said.

“In a city like Canberra, where we get a lot of sun, we should all keep a close eye on our skin and see our doctor straight away if anything changes or looks suspicious.

“People should be familiar with the look of their skin so they can pick up any changes that might be a skin cancer.

“The sooner a skin cancer is identified and treated, the better the chance of avoiding surgery, or in the case of a serious melanoma or another kind of cancer, potential disfigurement or even death.”

Australasian College of Dermatologists President Dr Andrew Miller said that despite Australians being well educated about the risks of skin cancer some parents seemed to be more focused on protecting their kids’ skin than using sun protection themselves.

“The theme for this year’s National Skin Cancer Action Week is ‘Join the SunSmart Generation’. We often see Australian parents protecting their children with rashies, hats, sunscreen, and shade – while not protecting themselves well.”

Dr Miller also said that it was important for parents to remember that their own sun protection was also vital.

“Two in three Australians will be diagnosed with skin cancer in their lifetime and it’s never too late to protect their skin from further damage. We want to see more adults setting a good example and joining their children in being SunSmart,” he said.

“Melanoma rates in Australians aged 40 and under are dropping and the children of today are our most SunSmart generation ever. However, it’s a real concern that sun protection behaviours overall don’t seem to be improving and that over 2.7 million Australians are putting themselves at risk of skin cancer by getting sunburnt on summer weekends.”

When checking for signs of skin cancer, look for:

More information on skin cancer and being sun smart is available at: www.actcancer.org

The survey results are available here.