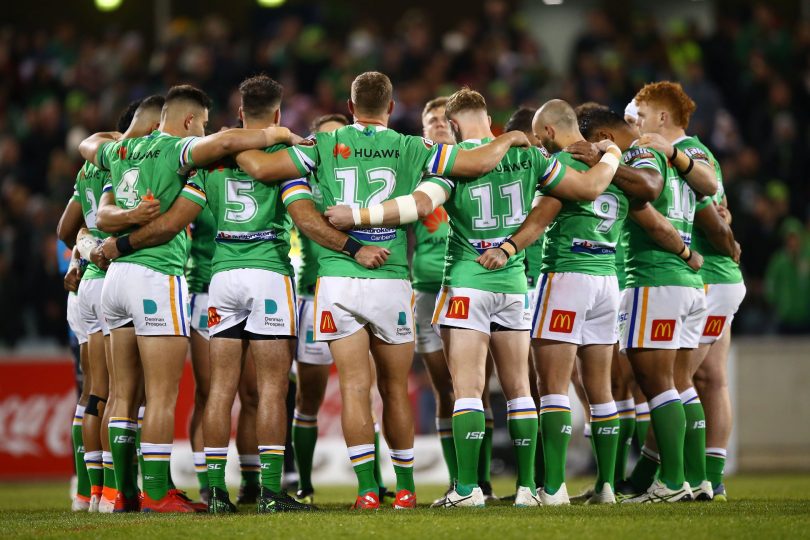 2020 could be the Raiders year. Photo: Supplied.

The Raiders have been one of the more stable teams in the off-season with minimal disruption. Even the departure of Aidan Sezer and Jordan Rapana created few waves with ready-made replacements available.

Those replacements should make the Raiders an even better team in 2020 with George Williams and Curtis Scott – two players with the ability to maximise the team’s already impressive arsenal – filling some pretty impressive boots.

Williams, who will slot in at halfback, spent much of the English Super League season in 2019 playing five-eighth for Wigan, where he scored 14 tries. Having watched him play a bit, he seems to love running the ball and he has a good kicking game.

Most importantly, though, is his ability to create opportunities. His combination with Josh Hodgson will be crucial.

Jack Wighton grew incredibly as a player through the season. So much so that he was named at five-eighth for the Kangaroos, a far cry from the previous season which ended in suspension. Just as importantly, though, will be Wighton’s combination with Hodgson.

Aside from Williams, the recruitment of Melbourne Storm centre Curtis Scott provides a fascinating conundrum for Ricky Stuart.

I’m pretty certain Scott hasn’t been signed to play Mounties, which leaves a question mark over BJ Leilua who has spent the majority of his time at the Raiders in the centres.

Could we end up seeing Leilua used as an impact player off the bench, as a running backrower rather than a centre? He has the ability to create havoc against a tiring defensive line.

Or we may see Leilua on the wing as Rapana’s replacement, although he has greater impact away from the sideline.

Bailey Simonsson deserves to start on one wing with Nick Cotric on the other.

And no one would forget Charnze Nicoll-Klokstad? He was a revelation at fullback last season.

In the forwards, Hodgson is the linchpin. Then there is Josh Papalii, who emerged as one of the most dominant forwards in the game, while young prop Emre Guler has done enough to get a start.

The back row takes care of itself through Bateman, Whitehead and Tapine.

On the bench, young firebrand Corey Horsburgh creates havoc and adds plenty when he comes on.

If Scott starts, we could see Leilua on the bench.

Sia Soliola will start more often than not, with the remaining position on the bench to be filled by Ryan Sutton. Sutton, it has to be said, battled to get back into the side last season after a stint on the sidelines through injury.

Depth again will be the key, with injuries destined to play a part at some point in the season. JJ Collins, Siliva Havili, Dunamis Lui, Sam Williams, the returning Matt Frawley, Michael Oldfield, Sebastian Kris and Hudson Young will again feature in 2020.

I will be fascinated to see the development of several young players coming through, such as Harley Smith-Shields, Kai O’Donnell, Andre Niko, Darby Medlyn, Jarrett Subloo and Daniel Keir.

Now add George Williams and Curtis Scott to the mix and this is a better Raiders side than it was last season.

And the Raiders don’t need to look too far for motivation with the lessons learned from last season’s grand final and before that the disappointing two seasons after making the preliminary final in 2016.