Why true romance, and women’s unmentionables, never get old 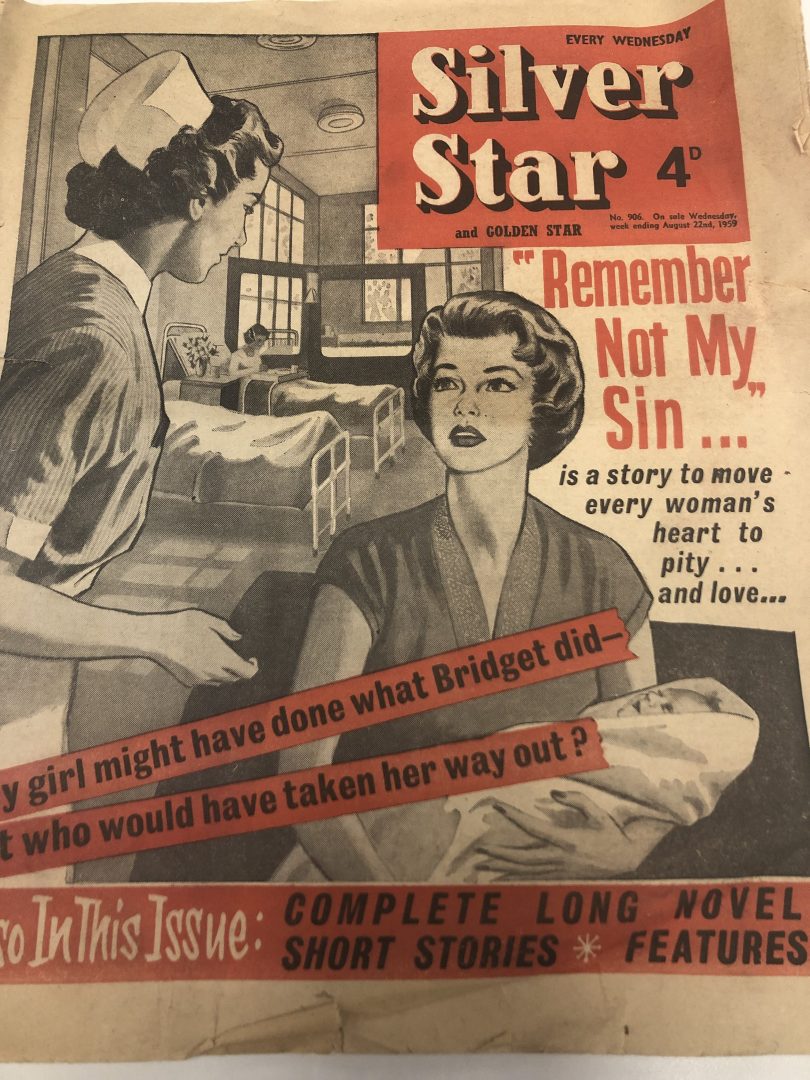 All the thrills, spills and ills of modern life in 1959 – read all about it. Photo: Supplied.

It’s hard to understand why people don’t write like they used to.

But what about the good stuff? The old, tattered, yellowing magazines with cover lines like, “Remember Not My Sin … is a story to move every woman’s heart to pity … and love …”.

Used to be that you’d find them in the specials bin at what was already a junk shop. Or in the shop’s skip out the back, where they dump women’s not-new unmentionables and Jeffery Archer novels. But these days, they seem to have become scarcer than an ashtray, anywhere.

Volunteering in an op shop and having a lifelong love for reading rubbish, I have developed a Pinocchio-like nose for really bad reading material. Sure it looks like it should be better lying low in a budgie’s cage, but when something is tattered, chances are it has been well read by many – and must be good. At something, at least.

READ ALSO: When women were women and men were men – but only one could drive the tractor

My Christmas find this year was Silver Star (and Golden Star) magazine, a steal at fourpence back on August 22, 1959 – and available every subsequent Wednesday. Not only did it scream the cover lines as above, but it also enticed you to read inside, “Any girl might have done what Bridget did – but who would have taken her way out?”

It also boasted what I had thought, up until I read it, something quite impossible: “Also in this issue – complete long novel short stories”.

I’m also a little worried about Her Indoors known as The Editress, clearly an animal lover and someone who lives a very out-there life. She writes in her column to readers: “Next week my aunt and I plan to go for a coach ride into the country, leaving Mr Tompkins, the cat, at home with a double portion of milk and fish.” (Cats, as we know, are meticulous when it comes to dividing up what food they will have each day). 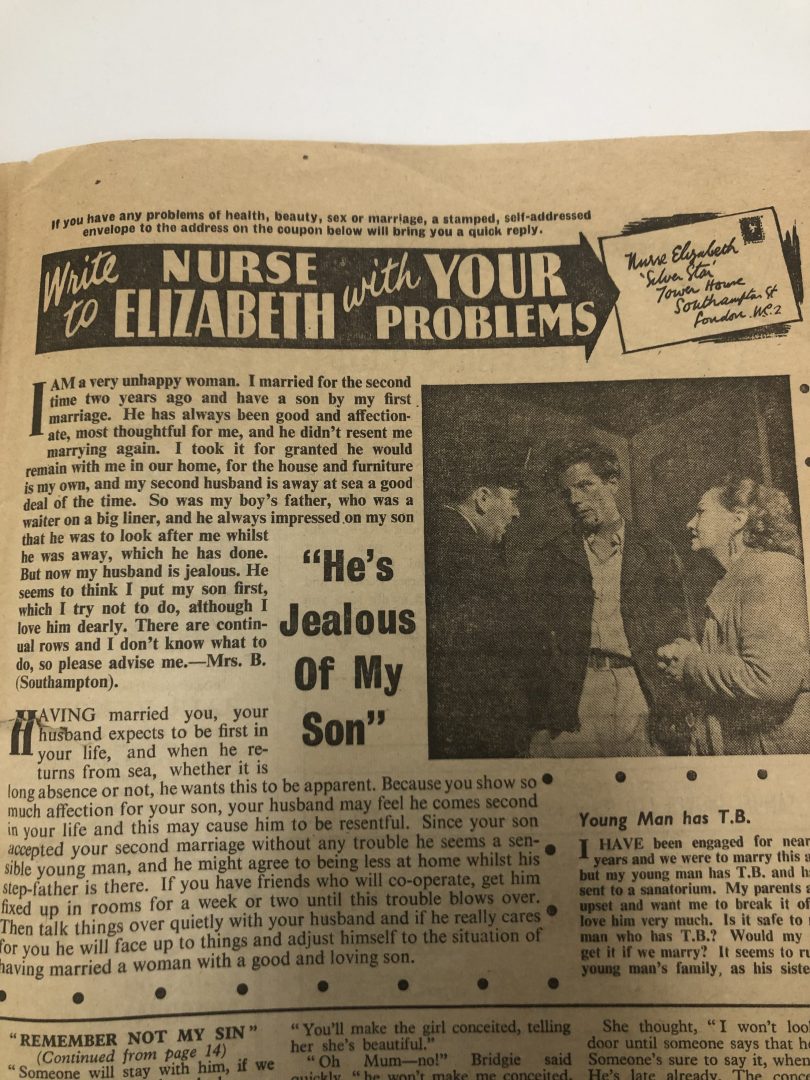 What would we have done without the wisdom of Nurse Elizabeth? Probably just got on with life. Photo: Supplied.

But wait, there’s more. The poetry. No one writes like this anymore. Phew.

“The plan that Linda dreamed of night and day,

She’d be an actress in a famous play,

So grand, so splendid and so great her Art,

London would queue to watch her in her part

She banged the office typewriter – and thought

My clothes will be the most expensive sort.

She stood swaying in the daily homebound train,

And musing saw the glittering stage quite plain

The lights, the claps, the thrills – she knew she could

(Given the lucky chance to act) make good.

Alas for her extraordinary plan!

She met a nice, but ordinary man.

Her husband now declares she is bewitching,

‘Acting’ the ‘part’ of housewife in the kitchen.”

But wait, there’s even more than we told you before. Opening chapters in this issue of the un-put-downable, “Remember Not My Sin – to the young parson, love for this girl was a forbidden thing!”, a recipe for custard in jelly (using packet jelly and packet custard) and ads for rose-scented hair removal.

We’ve saved the best for last: when you had a problem back in 1959, there was no one better to write for advice than Nurse Elizabeth. Sex, beauty, marriage or health problems, all you had to do was send her a stamped self-addressed envelope, and she’d give you a quick reply. Lousy advice, but a quick reply.

There’s no way we’re going to tell you about the letter from Annette of Parkstone who lived in dread at another stoppage of her bowels. Clever Nurse Elizabeth suggested Annette contact her doctor – and eat a lot of fruit. Definitely in that order.

Equally distressing was the letter from a Mrs L of Nottingham who, after moving to the new town, was introduced to the vicar’s wife. She, Mrs L, put out her hand but Mrs Vicar declined to take it and just bowed instead. Was she shunned? Rejected? Ignored?

Nurse Elizabeth as ever, had the answer. “I’m sure she did not intend to be rude. Although some people do shake hands on being introduced, the general rule is just to bow and smile.”

Kris Peralta - 2 minutes ago
Jackie White I agree, but I do believe a motorsport facility would reduce antisocial behaviour in general, not just over the... View
Mathew Mendo - 4 minutes ago
Live and let live, helps the economy more than the flower show. View
Jackie White - 4 minutes ago
Brendan Twomey you are totally missing the point: hoons repeatedly say they would confine their 'hooning' to a designated are... View
Lifestyle 30

Sandra Carle - 3 minutes ago
Tasmynee Carle must get one of these... View
News 240

Jazzy Dhooria - 4 minutes ago
It's not a fair assessment so long as it doesn't happen to you. View
Laura Bee - 8 minutes ago
I can't believe people seriously blame the gum trees. Gum trees in their natural environment develop symbiotic relationships... View
Frank Calipari - 11 minutes ago
James Forge I’m talking about tree pruning & trees that fall during wind, rain & storms not the falling of leaves. Though t... View
Lifestyle 6

TimboinOz - 3 hours ago
We have two large grey-black recycled-plastic worm farms. Much less work than composting, no turning, effectively zero smells... View
Sue Danaher - 3 hours ago
What on earth do people put in their bins? How can they generate so much waste after removing recyclables and food waste. How... View
News 4

With over 6000 current cases of COVID-19 active in the Canberra community and even more in the surrounding region of...
News 238

Following the recent storms which tore through large swathes of the Belconnen and Gungahlin region, many residents have voiced their...

I know it’s a generalisation, but many Canberra residents appear to have an uncomfortable relationship with anything to do with...
News 238

Before Christmas, I tried to be optimistic as the country, led by Prime Minister Scott Morrison and his NSW acolyte...
Community 90

Recipes for success: what’s tried, tested and true on your kitchen bookshelf?

Meet the residents of Australia’s most haunted house in Junee

Volunteer group uncovering tangible memories of Goulburn Base Hospital’s past