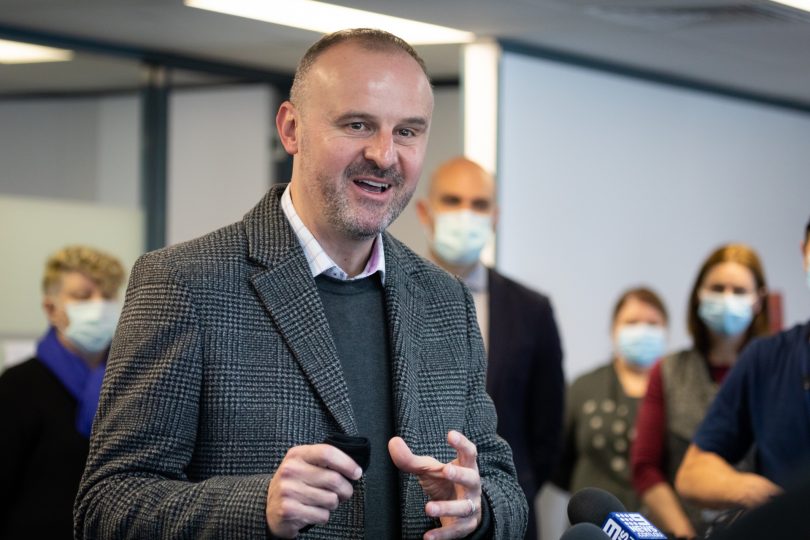 Chief Minister Andrew Barr said the definition of ‘up to date’ with vaccination will include booster shots. Photo: Michelle Kroll.

ACT Health has reported 489 new cases of COVID-19 in the ACT overnight as jurisdictions around Australia prepare themselves for the possibility of a winter wave of COVID-19 to coincide with the usual flu season.

The ACT’s health authorities have previously warned of a flu season that will be worse than the last two because of open international borders and greater movement of people.

At the next National Cabinet meeting in March, all jurisdictions will be required to present an audit of how well-prepared their health systems are to deal with an expected second wave of Omicron and a flu season.

Chief Minister Andrew Barr said today the ACT’s hospital system is prepared for this winter, as it has been throughout the pandemic.

So far, he said, hospitals have not yet reached capacity.

Mr Barr said there is usually a strong take-up of influenza vaccination in the ACT, and he expected it again this year as well.

“It’s not unreasonable there will be a call on the health system to treat patients with severe flu,” he said.

However, it’s unclear how the combined COVID-19 wave with influenza will play out.

Minister for Health Rachel Stephen-Smith flagged this morning on ABC Radio the possibility of the mask mandate remaining in place for the winter.

Currently, the low-level public health measures such as density limits and the requirement to remain seated while eating and drinking are in place until the end of the month. Dancing is also banned.

Yesterday, National Cabinet agreed to change the definition of fully vaccinated to require a booster, in line with recent advice from ATAGI. The wording will also be changed from ‘fully vaccinated’ to ‘up to date’.

While National Cabinet decided not to mandate booster shots nationally – except for aged care workers – states and territories can implement their own requirements.

In the ACT, limited vaccine mandates are in place for professions such as disability support, teaching and healthcare.

Mr Barr confirmed this morning that anyone already covered by a vaccine mandate in the ACT will become subject to the new rules when they come into effect at the end of March. However, he said it’s not likely to be an issue given most people covered by the mandates are already boosted.

To be considered ‘up to date’, a person must receive a booster dose within six months of their second shot.

Currently, anyone aged 16-plus is eligible for a booster dose three months after their second dose.

Those mandates will remain in place for the duration of the public health emergency, which was extended for an additional 90 days earlier this week.

Public health orders will be amended to reflect the new requirements.

Canberrans who wish to enter restaurants and cafes interstate where full vaccination is a requirement of entry will be obliged to receive a booster dose within six months of their second shot.

At the meeting, it was also decided that states and territories can decide when to move to the next phase of the reopening plan, although Mr Barr signalled today it was “too early to make a decision on any of that”.

“The next decision for us will be in a couple of weeks in relation to the existing restrictions that are in place,” Mr Barr explained.

READ ALSO Greens MLA hits back at Chief Minister: $2000 for an e-bike is a financial burden for some

The additional 489 local cases bring the total number of active cases in the ACT to 2533. Yesterday there were 500 new cases.

There are now 50 people in hospital, including three in ICU and one requiring ventilation.

Yesterday, there were 51 people in hospital, with three in the ICU and none being ventilated.

The vaccination rate for the ACT’s 12-plus population remains 98.6 per cent, and 58.9 per cent of residents aged 16 and older have received a booster.

There are now 1716 people in hospital and 108 people in ICUs around the state.

There are now 553 people hospitalised with the virus in the state.