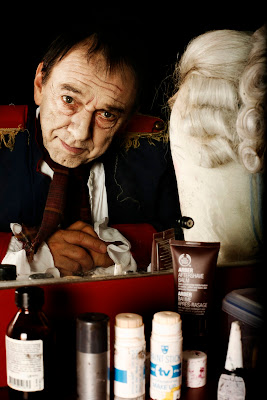 Friday may have been cold outside, but in Street Two there was warmth to spare with the opening of William Zappa’s Winter’s Discontent. As You Like It café poured out glasses of French wine served with delicious duck and camembert canapés inspired by Zappa’s muse, Les Miserables’ rascally innkeeper Thenardier (though the food was much better than the kind served up by Monsieur T!).

Written and performed by William Zappa (Bell Shakespeare’s The Government Inspector, David Williamson’s Let The Sunshine), Winter’s Discontent centres on aging actor Robert Winter, halfway through a tour of an interminable, postmodern (and utterly rubbish) one-man show, , Eleven Episodes from the Torture, Trial and Execution of Monsieur Thénardier. As he sits backstage, Winter ruminates about his life, his career as an actor, and the beauty and tragedy inherent in a life in the theatre. As he burrows deeper inside his memories, Winter’s conversation with himself slowly tranforms into a conversation with his characters, most especially the vile Monsieur T. It’s an unromantic view of an actor’s life – but one that is, nevertheless, a celebration. Winter’s Discontent strips back the gloss and glamour to reveal the all-too-human flesh, and the fragile, ethereal soul of the artist.

The Friday and Saturday night audience response was unparalleled – a strong, visceral reaction to the material, filled with awe, wonder, and solid enjoyment at watching a man so practiced in his art that he makes the most astonishing things look effortless. Reviewers agree: The Canberra Times’s Glenn Burns wrote that “Zappa’s performance reminds us that acting of this calibre is an art not a pastime, an art capable of stirring our emotions profoundly, making us laugh and even challenging our perceptions.”

Richly intelligent and literary, Zappa moves the play slowly and irrevocably towards its breathtaking denouement – a finish which leaves the audience gasping in their seats. Winter’s Discontent leaves you in no doubt – William Zappa is truly one of the giants of Australian acting. Get in to the Street as soon as you can to see this spellbinding piece of theatre!

Written and performed by William Zappa

Nada Krstin - 15 minutes ago
Jo Hann see my recent post to reply to your "if you pay tax, you should have an option to vote for the government that spends... View
Nada Krstin - 41 minutes ago
Jo Hannwow Jo, so you are a subject matter expert in employing tradie apprentices? You have been an employer have you? Plus a... View
What's On 16

iGonePostal - 8 hours ago
I agree. The shared and cycle paths also could do with a massive overhaul so that we have an actual network that cyclists can... View
Sport 4

Warren Price - 10 hours ago
Emma Turner if you have never been to a game and wanting to, just heads up this year due to Covid, tickets to home games are... View
show more show less
*Results are based on activity within last 7 days

@The_RiotACT @The_RiotACT
If you haven't turned your heater on yet, a winter-like blast of cold air this weekend will probably change that. Canberra temperatures could plummet to minus-5 https://t.co/BIJD1FQsGc (4 hours ago)