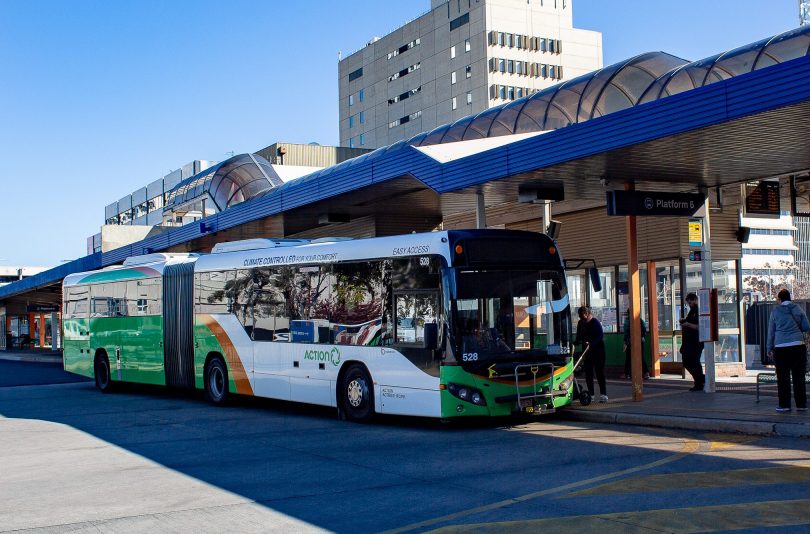 There has been a five per cent drop in weekday patronage on the new public transport network in Woden and Tuggeranong. File photo.

The ACT Government has released data of average passenger numbers on Canberra’s public transport network from June 2018 to June 2019.

The new network has seen an overall increase in weekend bus patronage across the territory, with patronage up 27 per cent on Saturday and 39 per cent on Sunday.

Despite the drop in patronage in certain areas of Canberra, ACT Transport Minister Chris Steel said there had been an 11.3 per cent increase in boardings compared to this time last year.

“We have seen an increase in the number of people taking journeys on the network and more people using the network overall,” Mr Steel said. “In particular, we know that residents are flocking to the new rapid bus services that reach further into our suburbs.

“But the ACT Government also recognises that Canberrans living in different parts of our city need different things from our public transport network, and that is complex.” 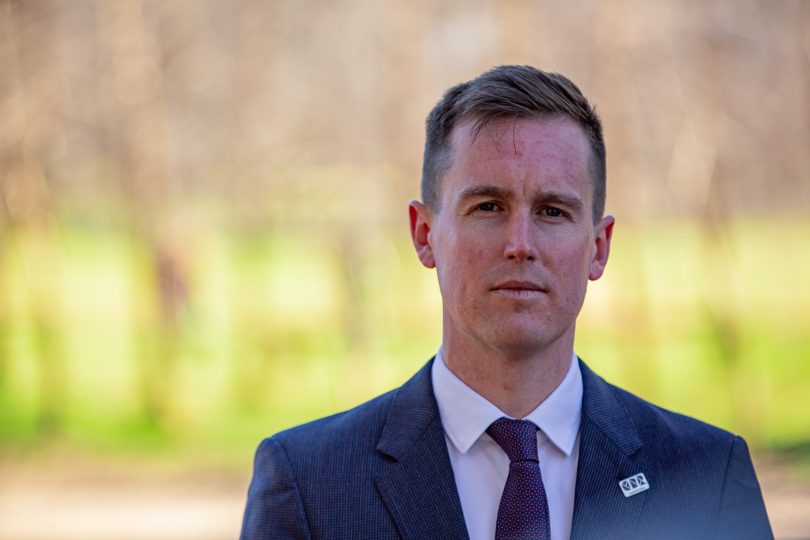 Mr Steel said the ACT Government would continue to improve the network.

Mr Steel said the ACT Government had made over 100 tweaks to the network since it started in April and would continue to monitor the network.

ACT Greens Transport spokesperson Caroline Le Couteur said that while it was clear that Network 19 had seen more patronage overall, some areas had done better than others.

“For example, Weston Creek was the one big winner out of the bus network changes. They now have a 15-minute service between Cooleman Court and Woden and as a result, patronage is up 9 per cent,” Ms Le Couteur said.

“The Greens will continue to encourage the Government to improve the public transport network in line with community feedback because we want to ensure that reliable services are available, seven days a week.”

Canberra Liberals spokesperson Mark Parton said people in the outlying suburbs in Tuggeranong were feeling let down by the ACT Government’s new network.

“They are absolutely ropeable over the disdain that has been shown to them in regards to the bus network changes,” Mr Parton said. “Lives have genuinely been changed because some people now find themselves confined to their home because it is too difficult to get out.

“People have been left stranded.”

147 Responses to Woden and Tuggeranong not getting on board new transport network, data reveals
Filter
Showing all comments
Show only Website comments
Show only Facebook comments
Order
Newest to Oldest
Oldest to Newest
« Previous 1 … 3 4 5

The R4 busses to and from Tuggeranong need to do the loop via the length of Athllon Drive before arriving to /after leaving Tuggeranong Bus Interchange. This will encourage more bus passengers especially those that drive to work at the many businesses, government agencies along Athllon Drive and in the streets south of South.Point.

Philippa Hurst - bit awkward for the ACT government this one lol

Well we have been complaining since day one that the services to and from Tuggeranong were worse off. Kambah to city 162 bus removed and put on via coolamon court adding an extra 30 minutes to the trip. The R4 buses not stopping in the civic bus zone BEFORE the double lights for northbourne. Waiting in the bus for the lights then waiting again for the same set of lights to cross back. Stupid. No cover when raining or sleeting. Don’t listen to us down south. No wonder we drive.

Spot on Margaret. Kambah residents were kicked in the backside in the new Bus network. You would think the new Transport Minister being our local member, might stand up for his neighbours, but apparently he doesn't give a...... How can doubling people's travel time, be sold as an improvement?

You’re kidding ... took them long enough to figure it out

The 25 minute wait out in the cold most afternoons while 3 or more full R4 buses drive past has made me rethink my commute by bus.

Len McLachlan give this a read

A 39% increase on Sundays when bus drivers only turn up if they feel like it? The propaganda gets less believable by the week.

I used to catch the 720 that got me from home in Hughes to work in Civic in About 13 minutes. Now it takes nearly an hour to get to work by bus FAIL.

That is because it is terrible. End of story

Once again, how can anyone say that overall patronage is up based only on boardings?

One thing that has become quite evident in Wanniassa is that the 72/73 bus route which is supposed to connect local shopping centres in the northern side of the Tuggeranong valley excludes the Wanniassa shopping centre. The route connects the Tuggeranong and Erindale centres via Oxley, and its buses get to within about a kilometre of the Wanniassa shopping centre — but there they remain. I imagine shop-owners (including a Coles supermarket) are not too happy at being left out like this — if you want to shop in Wanniassa you have to take your car because the bus that’s supposed to get you there won’t…. Maybe this particular local bus route would attract more passengers if it served a more useful purpose.

The Wanniassa loop bus doesn’t even go to the Wanniassa shops – it passes 500m away past ovals where no-one is waiting. I’m surprised Coles hasn’t objected as the bus only goes to Woolies at Erindale. It would be easy to reroute it up Athllon Drive and back past the shops and would only add 1 minute at the most to the trip.

That's because they took away half the buses and there's no way to get anywhere in under an hour. Southsiders DO still need to get to ANU, UC, etc.

I was talking to my brother in law last night about these bus use results, he’s an expert in geospatial data and he has previously analysed parts of the new Canberra network. He doesn’t think the new bus network is a total fail, but he does think some analysis of population, road network and route design must be undertaken ASAP. I reckon his biggest issue though, is the lack of real information from Canberra Transport, the continual positive spin from the government and the ongoing dismissal of anyone who dares complain that they are worse off.

Jeff Smith isn't that what I also said eons ago?

Probably true, I remember you talking about better evidence, I can't tell sometimes whether you are for or against the new Bus network.

Jeff Smith I am for the optimal outcome for the community, to be clear. Hence calling for use of better data to inform planning and decisions.

Yes, we would like to see proper data used for the betterment of the Bus Timetable.

Josh Shirley - 46 minutes ago
I had a 3 bedroom 2 bathroom townhouse in Melbourne 30mins from the city and the mortgage was $200 a week cheaper than any re... View
Vanessa McIntosh - 1 hour ago
Remi Fletcher Yvette berry ignores anything that makes her look bad If I was Kerry-Anne I’d be talking to Mark Parton MLA View
William Coats - 2 hours ago
Yes if a house is left empty in the ACT the owner is liable for land tax. View
Lifestyle 18

HiddenDragon - 7 hours ago
"...the government should let the market do its work and instead focus on cutting rates, charges and land tax as NSW has done... View
Ray Polglaze - 11 hours ago
Do you have evidence to support that assertion? View
Ray Polglaze - 12 hours ago
Barry Morris says "“Let the market sort it out – it will sort it out". But where is the evidence to support that confiden... View
Lifestyle 12