Woden’s zombie buildings to be re-born as residential apartments 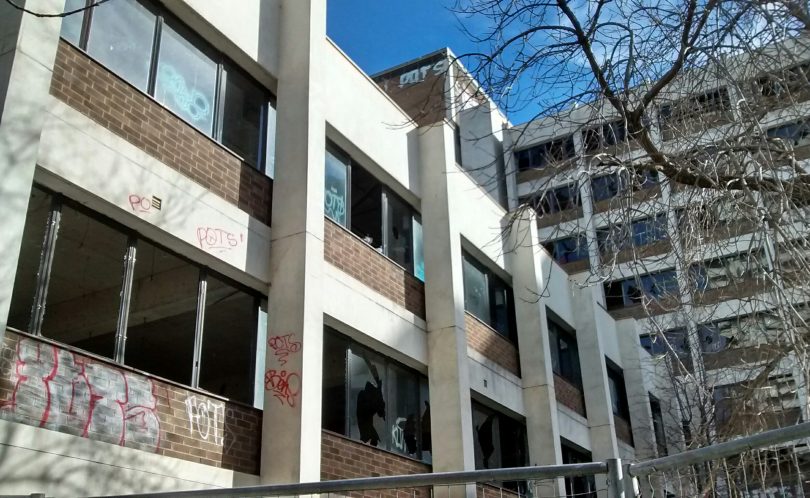 Seven and a half years and still standing: the abandoned Alexander and Albemarle buildings in Woden are to be re-purposed as residential apartments.

The Woden Valley Community Council (WVCC) has welcomed plans by the owner of former Health Department office blocks in the Town Centre to re-purpose them as residential apartments.

The fenced-off and heavily vandalised Alexander and Albemarle buildings in the Woden Town Centre have stood empty for more than seven years and been the subject of a standoff between the ACT Government and owner Doma Group, which says the territory’s lease variation taxes have made the site unviable for redevelopment.

Doma managing director Jure Domazet confirmed the repurposing plans this week and that an architecture firm had been appointed but said it would be premature to provide any more details such as the number of apartments planned, or elaborate on ground floor retail and commercial features.

WVCC president Fiona Carrick said the Council welcomed resolution to the issues associated with the derelict Alexander and Albemarle buildings.”We hope the buildings can be refurbished to provide a great outcome for the people of Woden, particularly those that walk past them every day,” she said.

The Council also hoped that green space could be retained in the buildings’ courtyards.

Last week in response to disturbing photos of youths on top of the nine-storey buildings, Mr Domazet told media that Doma hoped to lodge a development application for the buildings “in the near future”.

He said the lease variation taxes had made demolition unfeasible but the company was now planning to repurpose the buildings into affordable residential apartments.

“Our design team is embracing the re-use concept and the apartments will not be the standard Gyprock box that the Woden market is used to,” he said.

“The development will be the least dense residential development in Woden with an extensive private landscaped area and will be very affordable.”

He said the project would also include a childcare centre, a cafe and other non-residential uses on the ground floor.

“I am told that it is not just a problem for our buildings and that unsupervised kids are entering a lot of the empty buildings at Woden,” he said.

What are your thoughts on the repurposing of the Alexander and Albemarle buildings in Woden? Do you know of any issues that arose as a result of these buildings being abandoned? Let us know by commenting below.

And where would the residents park their vehicles. There’s no basement parking.

I’d be thinking the owners have floated this in order to quieten the flack about the sites. “”Mr Domazet told media that Doma ”’hoped”’ to lodge a development application for the buildings “in the near future”.””

I really welcome the possible option of some well designed spacious apartments right next to all the facilities.

Having cafes and restaurants below some of the Kingston Foreshore apartments has not been positive but has been very expensive to the owners with regard to restaurant’s water use being paid by the apartments, the expensive putrescent rubbish removal and smell, and ‘strangers’ staff accessing the apartment parking and stealing from the storage sheds. Hope that doesn’t happen here.

I thought newer apartments had to have their own water meters now, and Kingston Foreshore is new. So surprised about the water issue. Or did I hear wrong about the individual meters?

I really welcome the possible option of some well designed spacious apartments right next to all the facilities. I’d like one with a private balcony too.

Having cafes and restaurants below some of the Kingston Foreshore apartments has not been positive but has been very expensive to the owners with regard to restaurant’s water use being paid by the apartments, the expensive putrescent rubbish removal and smell, and ‘strangers’ staff accessing the apartment parking and stealing from the storage sheds. Hope that doesn’t happen here.

JS9 - 26 minutes ago
In what world should a tenant have to provide a reason to leave? If they break during a fixed term contract they have require... View
nobody - 35 minutes ago
People should care about getting their own place. View
Marc Blackmore - 55 minutes ago
Kate Le-Goat you obviously were not around or don’t remember what happened when the government wound back negative gearing.... View
News 214

Kelly Rush - 45 minutes ago
Jodie Brown how is this thing still there. View
Jodie Brown - 47 minutes ago
Kelly Rush same flying fox that busted your knee View
Kylie Klose - 2 hours ago
Ryan came off that flying fox 2 weeks ago and landed on all fours and his nose after he flipped at the end. 😭 View
News 35

UPDATED 4 pm: As Friday draws nearer, the rules governing how our COVID-normal will look continue to be released. As expected,...
News 40

UPDATED 5:40 pm: More COVID-19 restrictions are set to be eased after the ACT reached the crucial 80 per cent fully vaccinated...
Property 38