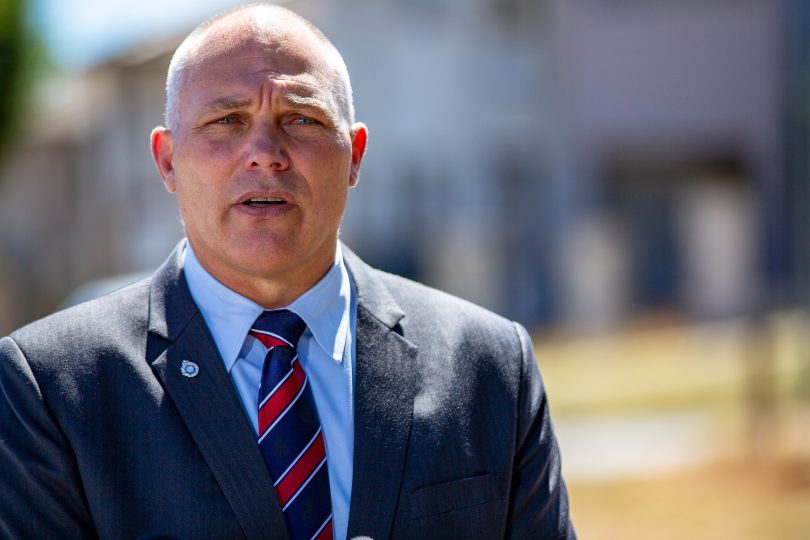 A woman was wounded during a gang-related drive-by shooting in Richardson last night in which five shots were fired into a house.

Police are investigating the incident which they believe is related to conflict between Outlaw Motorcycle Gangs – one of which is the Nomads.

ACT Policing said that shortly after midnight (Monday 11 March 2019) police received reports of gunfire at a home in Richardson.

Detective Superintendent Scott Moller said that at least three men had fired upon the house in a drive-by shooting.

He said three people were in the house at the time and he confirmed that they were all known to police.

“One of the people in that house was struck by one of those shots and suffered a gunshot wound to the shoulder,” Detective Superintendent Moller said.

“She’s been transported to hospital and is being treated as we speak,” he said around midday today (March 11). “At this stage, it’s not a critical injury.”

Detective Superintendent Moller said that early investigations suggest that the incident is gang-related.

“It’s only very early days in this investigation. What I can see at this stage is that it is conflict between gangs,” he said.

“At this stage, we’ve determined that they were members of the Nomads Outlaw Motorcycle Gang.”

Detective Superintendent Moller said that the injured woman is not in a gang but is related to a member of a gang.

He said that police had not determined at this stage whether the incident is related to any other recent incidents such as the shooting attack on March 2 which occurred in Theodore.

ACT Policing said that while investigations are in the early stages, ACT Policing remains focused on community safety and Canberrans should expect to see a more visible police presence in coming days.

Police are urging anyone who has any CCTV or information that could assist police to contact Crime Stoppers on 1800 333 000, or via the Crime Stoppers ACT website. Information can be provided anonymously but please quote reference 6372664.

Well apparently these social events in the burbs fall under our being compliant with our human rights laws and bikie gangs. Our parliament have said on numerous occasions we must comply with the human rights act in regard to these gangs.

So not much we can do .. just get on with things… ( this is what our elected leaders want us to do )… So yippee NRL starts next weekend…. but remember to duck quickly at home when you hear gun shots down your street..