We've had a moment of great significance at one of our wombat release sites — can you see what it is?

A mother wombat with a tiny joey in her pouch caught on camera at a top secret release site just north of Canberra has local wildlife rescuers celebrating.

The tiny joey’s snout briefly peers out from between its mother’s legs in grainy black and white footage from a night vision camera.

It may not seem like much, but it’s big news for the region’s wombat carers.

ACT Wildlife has released six wombats into the sanctuary on a property just north of the territory – it’s exact location is a tightly-kept secret.

The group’s Evan Croker says if the mother is one of those rescue wombats, it’s very exciting.

“It would be cause for great celebration that she had a baby,” he said.

“We can all become grandparents.”

However it may some time to confirm the mother’s identity.

“If we begin to figure out where they’re living we can set up cameras all around we suspect their burrow is,” he says.

“Then after a while we can set up a variety of cameras.”

“It’s one of those processes of deduction and we can zero in on a site that we suspect is where the mother wombat is.” 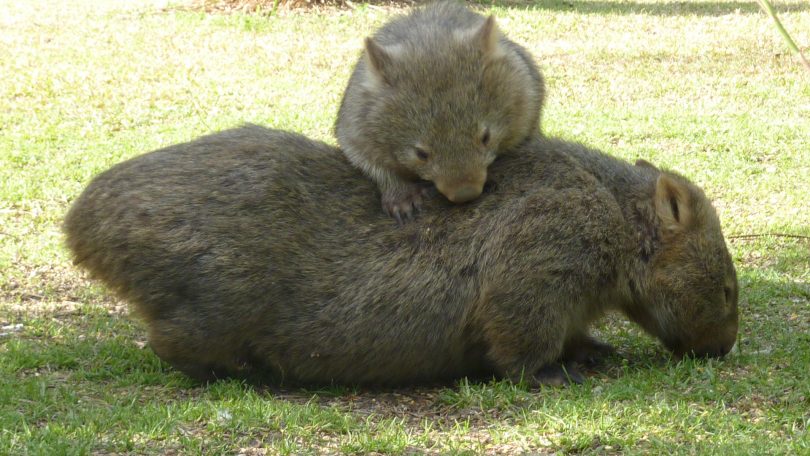 Mr Croker says it’s wonderful for carers to see the animals they’ve raised get a second chance at life.

“To actually breed and create another generation which is just fantastic,” he said.

“We’re going to be very interested in finding out whether this wombat is one of our released.”

Even if it turns out not to be one of the six rescue wombats, it’s still great news for the sanctuary.

“It means that it’s in healthy condition, it’s a great place for wombats to live and breed,” Mr Croker said.

“That means that there’s adequate water and food.”

It also indicates that the area is free of parasitic diseases like mange, which Mr Croker says is the reason most of the wombats had to be taken into care in the first place.

Wombat Wednesday finds one of our released wombats having an encounter with a local. Love the way he goes back to eating grass right after!

The cameras have caught wombats eating and drinking at the waterhole as well as some unusual nocturnal shenanigans.

“A week or two ago one our our rescued wombats had a little bit of biffo with a kangaroo,” he said.

“They have amazing little hijinks.”

They’re hoping to locate and identify the wombat mother and joey within the coming months.

To make a donation or learn more about wombats in the ACT, visit ACT Wildlife .

@the_riotact @The_RiotACT
Looking for a year-round #SnowyMountains home that has it all? This beautiful #home on the shore of Lake Jindabyne has every luxury and convenience you could ask for, and some you never knew you needed https://t.co/pXr0NwK2ap (41 minutes ago)