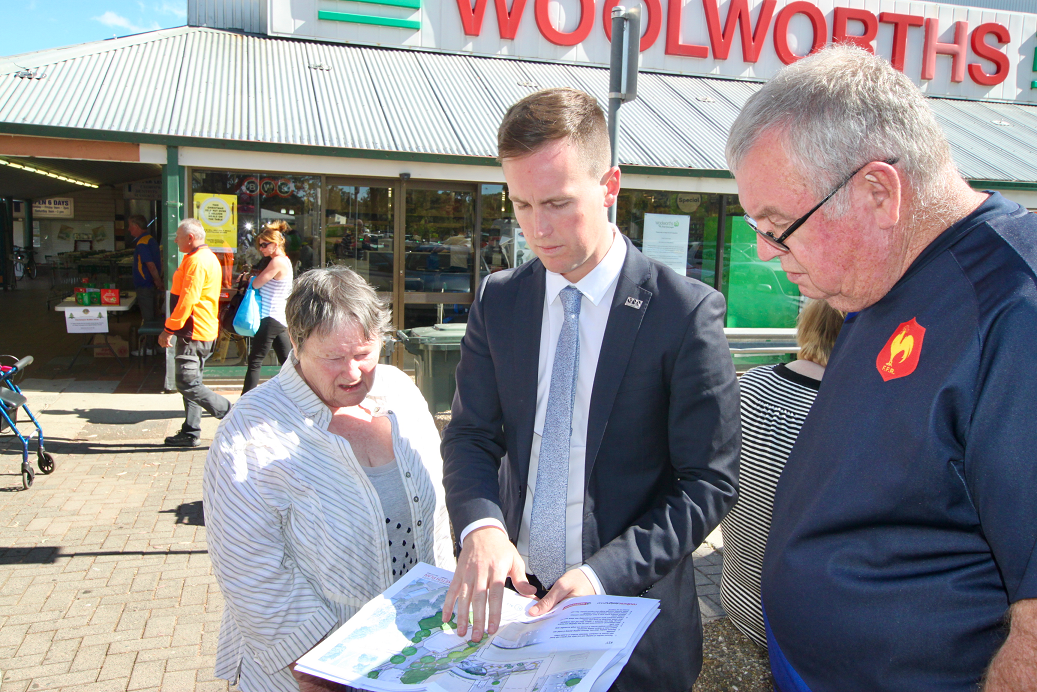 Work has begun on major facelifts for the Kambah Village and Spence shopping centres designed to improve their attractiveness, facilities and ease-of-use.

A total of $300,000 is being spent on the first stage of work at Kambah Village as part of the Kambah Group Centre Master Plan.

More major work at the Kambah Village shopping centre costing $2 million will occur in stage two but is subject to funding being provided in next month’s ACT Budget for 2017-18.

Member for Murrumbidgee Chris Steel said the initial stage one upgrades at Kambah Village will focus on replacing the raised timber deck with new paving and levelling in order to provide more functional outdoor dining areas.

Some walls will also be removed around the central courtyard to open up the area for greater public use.

“The walking connections to, and within, the courtyard area will be improved, including new steps and an upgrade of the ramp linking the courtyard to the shops,” Mr Steel said.

“Landscaping will be improved with new deciduous trees and garden beds to help cool and soften the courtyard, as well as planting to screen the rubbish bin collection area behind the Kambah Tavern.”

Mr Steel said the government had consulted with the community about the scope of the Kambah Village upgrades and that the current work follows on from a preliminary clean-up of the public areas in March.

“Kambah is the largest suburb in Canberra and these upgrades will improve Kambah Village to ensure it meets the Kambah community’s everyday shopping and recreational needs,” Mr Steel said.

Member for Ginninderra Tara Cheyne said that work underway at the Spence shopping centre would improve its functionality, security and appearance.

“The upgrade at Spence shops will improve recreation opportunities with a new community space to be provided for people to gather and spend time,” Ms Cheyne said.

“The upgrades aim to facilitate movement to and through the shops with pavement, path and ramp works and more parking spaces for people with disability.”

“Whether you visit them on the weekend to pick up bread from the local bakery, or pop in after work to pick up an item or two at the grocer for dinner, suburban shops serve an important retail and community function for local residents,” she said.

“It is important to maintain and improve our neighbourhood shops to ensure they continue to meet the community’s everyday shopping and recreational needs.”

Top photo: Member for Murrumbidgee Chris Steel showing plans for the upgrade to shoppers at Kambah Village.
Image: Plans for work on the Kambah Village courtyard area used in the preliminary consultation.

I’m a bit dubious when the claim ‘major facelift for Kambah Village’ is used and then only $300k in actual funding is given. This outcome looks more like a stray bit of Government money being used to repair long broken parts of Kambah Village that haven’t had a dollar spent on them since 1978.

Surely Kambah Village is amongst the worst maintained shopping centres with the worst facilities for size in Canberra. Especially when you consider the 15,000 residents of Kambah who should prefer to shop at Kambah Village, but mostly choose to go elsewhere. The village is long long overdue for some proper upgrades, proper landscaping and public amenities improvements. A nice piece of landscaping and gardening would encourage a good suburban restaurant or two to open in the courtyard.

Also, It’s a pretty scary place after 5.30pm in Winter and I wouldn’t want to try and move around there with a walking stick or in a wheelchair at any time of day. The paving is more obstacle course than pathway.

Actually here is a photo of Kambah Village back in the day. I think this pretty much shows the lack of improvements since day dot. There is no Kambah Tavern in the picture and I can’t claim that it improved the area unfortunately. http://farm7.staticflickr.com/6032/6285161780_7152538b80_z.jpg

Kambah Village supermarket development gets go ahead as upgrades completed

Upgrades on way for Dunlop and Fraser shops

@The_RiotACT @The_RiotACT
If the ACT had a cycling master plan, Tim Gavel says many complaints about cyclists would be resolved (and everyone would be safer) https://t.co/baLogC2TNY (24 minutes ago)