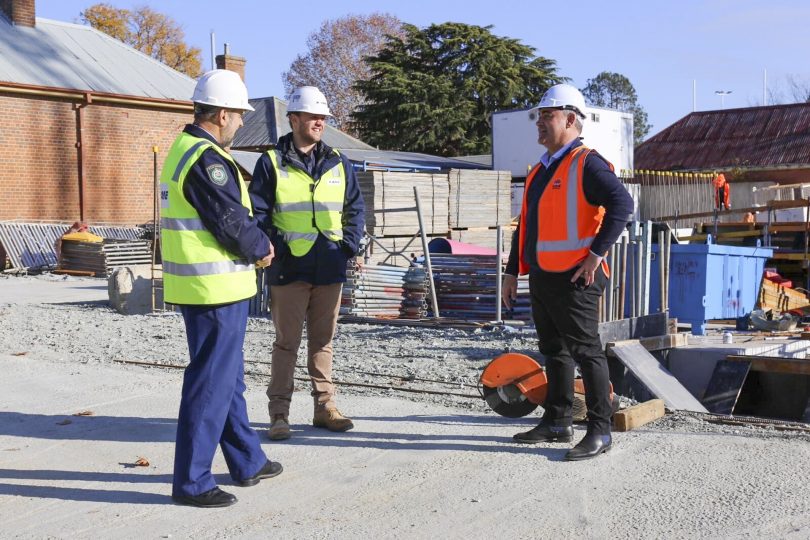 Major building works have commenced in Queanbeyan’s CBD, starting with renovations to the 45-year-old courthouse which will replicate the neighbouring Queanbeyan Police Station.

Upgrades are also being undertaken on both the courthouse and police station to bring them in line with modern standards.

While launching the largest renovation of the Queanbeyan Courthouse since its construction, Member for Monaro John Barilaro said the courthouse will undergo a complete upgrade, including modifications to the exteriors and advanced technology. Upgrades are partly funded by a multi-million dollar investment by the NSW Government.

The exteriors of the two buildings will also complement each other.

District Court Judge Laura Wells and Magistrate Roger Clisdell were also on-site to mark the beginning of construction, which Mr Barilaro said will set a new benchmark for court services in the region.

“Over the past four decades, the existing courthouse has served the region well; however, the community deserves an updated facility that is equipped to deal with modern crimes, cases and situations,” he said.

The NSW Government initially planned to undertake a knockdown and rebuild but following extensive consultation with stakeholders the decision was made to instead opt for a complete upgrade.

This not only means the project will be completed ahead of what was initially projected, but the disruption to court services will be reduced.

Mr Barilaro said the end result will be a state-of-the-art courthouse that will serve the needs of Queanbeyan and the wider community.

“This upgrade is significant and will see the current layout modified to include a multi-purpose room, one additional interview room, an additional public waiting area and a conference room,” Mr Barilaro said.

“In addition, an outdoor space will be converted into a jury assembly room and new high definition audio-visual link will be installed throughout the courthouse, reducing the need to transport defendants in custody to court.

“A big focus of this upgrade is on ensuring the courthouse is a more comfortable and welcoming sanctuary for vulnerable court users, with upgrades also being made to witness and victim suites.”

Mr Barilaro said work is continuing on the new police station. Queanbeyan police are currently operating from a temporary location at nearby Morriset Street.

“A new police station and a complete upgrade of the courthouse will make a massive difference in Queanbeyan and the surrounding region by ensuring the community has the facilities they deserve,” Mr Barilaro said.

“Work is continuing next door on the new police station, with the ground floor concrete pour completed and the level one and ramp pours underway.”

The renovation works on both buildings are expected to be finished in early 2021.

Capital Retro - 8 hours ago
I know that JC but it wasn't in the link I referred to. The "arms length" ownership is along the same lines as the Canberra L... View
Capital Retro - 9 hours ago
Never heard of this dude. I note he refers to CGS as a "business" too. How come no one is criticizing the Federal government... View
show more show less
*Results are based on activity within last 7 days

@the_riotact @The_RiotACT
ACT Senior Australian of the Year and 50-year volunteer with @stjohnaustralia Valmai Dempsey wants mandatory #first-aid training for learner #drivers. She says it's a no-brainer https://t.co/Xovhw0Ec3H (32 minutes ago)