Wright roadworks a bit much for a B-Double 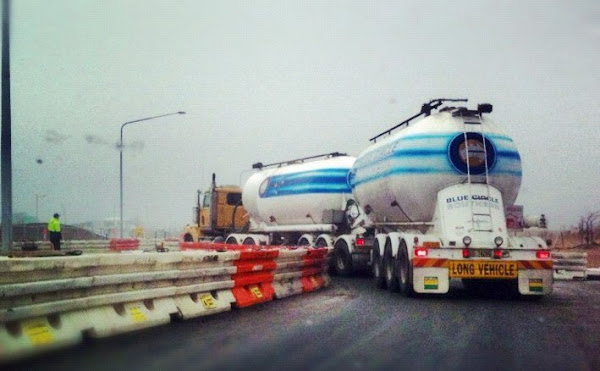 This morning, as I wound my way through the various road work on the Coppins Crossing Rd – Uriarra Rd – Cotter Rd route around the new suburb of Wright, I came up behind a B double which (when the red light changed to allow us through the roadwork) had some trouble negotiating the route. For a while I was concerned, as backing one of those things can’t be fun, but after some minor repositioning of barriers, he got through.*

This prompted me to comment on something I have been thinking of for some time now. During the construction of this suburb, and the changes to the roads around it, at various times both Cotter Rd and Uriarra Rd have been reduced to a single lane actively controlled (lights or lollipop man). At one point, both roads were restricted in two separate places. In light of the fact that they have also just built an entire suburb worth of roads currently laying idle, I can’t help but wonder if they could not have built one road, then re-rerouted all traffic along it then closed the other and been able to work without cars constantly creeping past (at speeds varying from 15km/h to 80km/h).

[Ed – Got an image of Canberra you want to share with the world? Email it to images@the-riotact.com ]

I am quite taken by the idea that, with a new suburb under construction, it’s smart to narrow the access point so that the kind of vehicle that is most likely to go into a construction zone cannot do so with shimmying and angling. Another triumph of ACT Planning!

Surprised it hasn’t happened at the new bridges being constructed on the Monaro Hwy at Fyshwick.

Guys please a bit of compassion we are talking about the intellectually disabled….they know no better!!

I know.. I would have left them one of the disabled seats up the front of the bus so they could lick the windows, but that bus never came.. Buses don’t go to new suburbs..

I am quite taken by the idea that, with a new suburb under construction, it’s smart to narrow the access point so that the kind of vehicle that is most likely to go into a construction zone cannot do so with shimmying and angling. Another triumph of ACT Planning!

I can’t wait to see wait shenanigans they get up too when the start the epic attempts to build Maura parkway.

I can’t wait to see wait shenanigans they get up too when the start the epic attempts to build Maura parkway.

Lazy workers would rather not have to move the roadblocks

Guys please a bit of compassion we are talking about the intellectually disabled….they know no better!!

Brent Hutch - 5 minutes ago
Gloria Altinger might need to check your maths View
Tom Munro - 2 hours ago
Conrado Pengilley Nothing to do with ACT government. It’s NCA land and would be federally funded. View
Brice Smith - 10 hours ago
Malcolm Snow is a conservative. Got nothing to do with Barr. View
ACT Election 12

Pam Wood - 1 hour ago
Another rort in progress View
Jason Preston - 14 hours ago
Buying your vote with your kids View
Jesse Mahoney - 18 hours ago
Y'all are arguing with someone who likes Pauline Hanson. I wouldn't waste your energy View
Property 7

Paroksh Datta Prasad - 3 hours ago
Adam Burzynski I called it in 2013 hehe View
Adam Burzynski - 4 hours ago
Paroksh it has begun.... View
Scott Humphries - 20 hours ago
"Braddon of the south" . So the light industry and commercial businesses will eventually be pushed out by apartments, just as... View
ACT Election 15

Darron Marks - 5 hours ago
Schools being closed I would assume is a direct reflection of the change from the Southside being the former nappy belt of th... View
Evan Hawke - 5 hours ago
Darron Marks Yep, as the Government has been putting in great infrastructure in Gungahlin they have been downgrading the infr... View
Darron Marks - 12 hours ago
When the construction moves so will the priorities for Government to build new infastructure. And it would have been the same... View
News 14

Jim Jim - 7 hours ago
Balanced journalism Ian, neither political party are doing that fantastic a job and deserve your devotion. Be critical of bot... View
Charny Barney - 1 day ago
Are there any more policy promises they are going to back flip on? Alistair's indecision and poor decision making is not a go... View
Lifestyle 8

The first week of the election campaign proper has come and gone, and one thing is clear - no one...
News 23

@The_RiotACT @The_RiotACT
Labor's Andrew Barr appears more at ease with his leadership and comfortable with his achievements. But as he faces the October 17 election, can he shake the tag of an old and tired government? https://t.co/cQiav4SUqI (24 minutes ago)