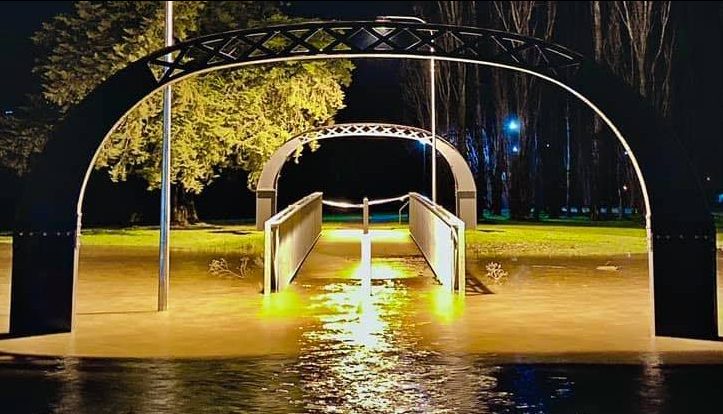 A bridge under troubled water during the flood. Photo: Tom O’Dea.

The extent of damage caused by floods in early August continues to grow as councils in the Southern Tablelands clean-up and carry out assessments.

Yass Valley Council has calculated a loss of more than $427,000 in flood damage to roads, parks and other infrastructure.

The council declared the area a natural disaster zone after receiving 125 millimetres across the weekend of August 7-9.

Floodwaters caused the water level in Yass Dam to reach 2.45 metres above the threshold, resulting in the closure of some 25 roads and crossings in the area.

The most significant damage was to Shingle Hill Way, where approximately 100 metres of sealed pavement was washed away, as well as to Murrumbateman Road, Sutton Road Crossing and East Tallagandra Lane.

The total cost of damage to the council’s local road network was in excess of $248,000 and is still climbing, with problems arising from the continued rainfall in the weeks following the flood event. 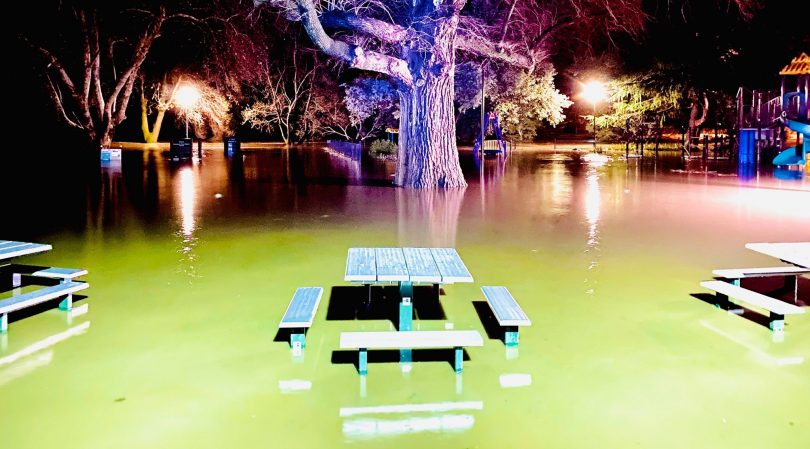 Riverbank Park in Yass submerged in water during the flood. Photo: Tom O’Dea.

Like the Yass Valley, Goulburn received a downpour of 130 millimetres and faced significant damage to roads and infrastructure.

Goulburn Mulwaree Council is yet to put a figure on the damage but said the worst was to the footpath on Park Road, the pavement on Brayton Road, exposed stormwater pipes on Bungonia Road and significant mess and wash away at the site of the new May Street Bridge, currently under construction.

Pavement sheets also broke away on the Oallen Ford Bridge but were repaired by Queanbeyan-Palerang Regional Council.

Goulburn Mulwaree mayor Bob Kirk said the council would also be applying for disaster assistance funding, for the second time this year after flooding in February.

“We have unfortunately again had significant road and infrastructure damage occur, but we will never say no to the rain!” Cr Kirk said.

Upper Lachlan Shire Council staff have also been cleaning up in the weeks following the heavy rain. The council had to close nine roads and four public grounds during the floods.

All three councils have been approved for funding through the Commonwealth-State Disaster Recovery Funding Arrangements.

JC - 8 hours ago
Problem with the medical world is balance or probabilities doesn’t cut it. How many times do you read of people who have be... View
JC - 9 hours ago
The only problem with your theory and quoting the average age of deaths, is those deaths have happened in an environment of r... View
phydeaux - 11 hours ago
While reading here, I noticed that among the usual weird facebook views there was a journal reference, so I looked it up. Dea... View
News 39