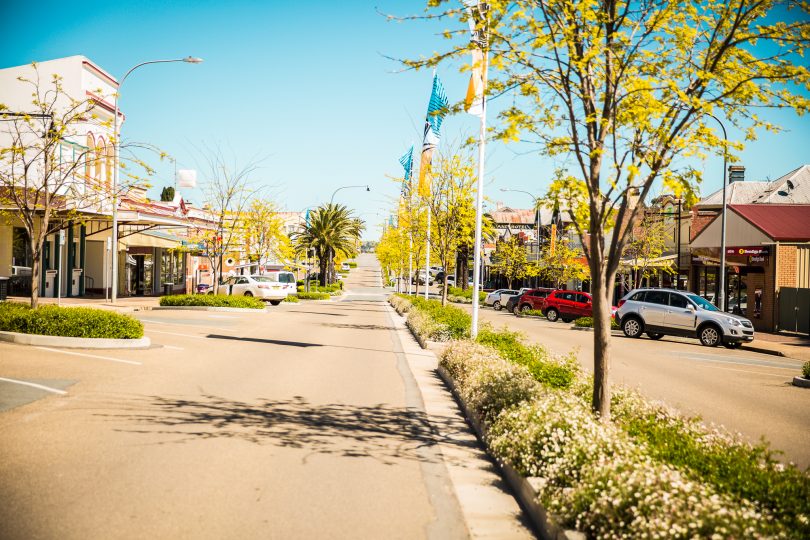 Harden’s rejuvenated main street (above) and a road. Photos: Supplied.

In August 2008 I drove to Harden 90 kilometres west of Canberra to write about a small wheat town dying. No where was this more evident than in a $3.5 million medical centre bequeathed by a dentist Geoff Kruger, who had died years earlier, leaving a generous legacy.

At the time Harden’s doctor for 30 years, Dr Yusuf Khalfan, 62, told me he could not come to an agreement with the council to relocate his practice into the new centre. He had looked for Australian graduates to work with him for many years and had just hired his third overseas-trained doctor. ‘‘They work for a while, get their registration and move, there is not a continuity of rural general practitioners,” Dr Khalfan had said.

Since then four doctors do indeed work in Harden’s bustling Kruger Medical Centre. As do two registered nurses, multiple receptionists, two physiotherapists and a phlebotomist (trained to draw blood from a patient).

The head of ANU’s Rural Medical School, Associate Professor Malcolm Moore, says a sense of isolation, lack of clinical support, and lack of infrastructure deter doctors from the bush. Rural areas need a ‘critical mass’ so that doctors working in these areas can provide after-hours care and cover for periods when they are away. “A third barrier is ensuring doctors in rural towns earn a competitive income when compared to their counterparts in the cities,” Professor Moore says.

The ANU Rural Clinical School sources students from rural backgrounds and provides at least one-year full-time training in rural towns for at least 25 per cent of the ANU medical student cohort. Professor Moore says this has increased the rural workforce in Eurobodalla, Bega, Cooma, Goulburn, Young and Cowra as well as surrounding smaller towns.

In an earlier life, John Horton formed a dance band called Johnny Horton and the Niteliters. A wool classer who had several more occupations including travelling southern NSW and Canberra for a pharmaceutical company, Mr Horton retired to Harden in 2012.

Elected to the council, he challenged the under-utilisation of the medical centre and befriended Dr Sazeedul Islam, a Bangladeshi-trained GP employed by a medical practice in Orange to visit the Harden clinic. “I spoke to young Sazeedul, he was a go-ahead young fellow, I said, you apply to get the lease and build it up into a practice, it would be a great career for you and great for our community,” Mr Horton says.

“His wife Sirijana Rahman, a smart lady, was studying pathology in Wagga Wagga. They had virtually nothing when they came to Harden, a broken down old car. Council supplied them with a house,” Mr Horton says. 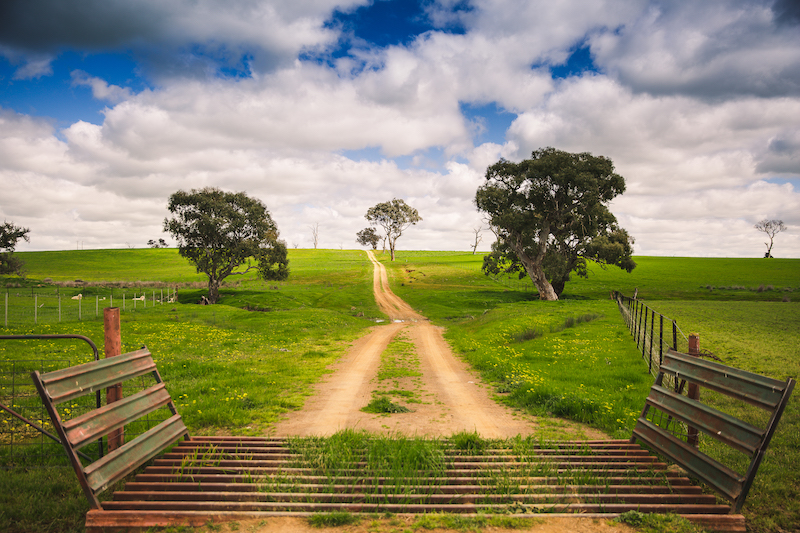 Through the rolling hills around the country town.

Successful in getting the lease, the two doctors recruited a female doctor from Goulburn to work in Harden as Mr Horton continued pushing for more doctors. “If anyone was sick, or wanted a holiday, we would be in big trouble.” He says Dr Khaflan resigned and gave his list of patients to Dr Islam.

These days the country practice is buzzing with activity. “For a village of 3800 people, it is doing pretty well I reckon. When I came here the townsfolk, they were all despairing to a degree,” he says.

Dr Islam remains the centre’s principal practitioner, but along with his wife has opened another clinic in North Richmond. Dr Rahman declined to comment for this story.

“One is students who’ve already lived in a rural town. We find that medical students with these backgrounds are comfortable with living and practising in rural communities.

“Providing training in rural areas during a student’s medical course as well as after graduation is also key. This has been shown to increase the medical workforce in rural areas – including GPs and other specialists. “Finally, financial incentives for training and living in remote areas have some role, but they aren’t as important as the first two factors.”

Medical student Joshua spent a fortnight at Harden in February. Writing on the national John Flynn Placement Program, he says he spent two hours each day with another phlebotomist, building confidence in his ability to take blood. The rest of his time was spent with Dr Prakash Bandgar seeing a wide range of patients, from those on peritoneal dialysis to mental health cases. Dr Bandgar was also interested in skin cancer detection and removal. Harden is home to an ageing farming community, where skin cancers are rife.

“I asked every patient if they would mind me sitting in for the consultations. Over the two-week period, not one patient said no,” Joshua writes.

Postscript: since 2016 when the Rural Workforce Agencies began administration of the John Flynn Placement Program, six students have attended the Kruger Medical Centre in Harden on nine occasions.

A spokeswoman says the challenge in attracting students to a future career in rural Australia, is that during their undergraduate study they don’t always choose to undertake a rural placement and experience what country towns have to offer; personally and professionally. This is where the John Flynn Placement Program gives students insight into living and working in a rural town.

Robyn Baer - 17 minutes ago
Drove back today. LOTS of potholes due to the rain. View
Jenny Drenkhahn - 7 hours ago
not to mention changes further South in the Bega Valley Shire; rebuilding in Cobargo and Tathra, Twyford Hall in Merimbula ;... View
Lifestyle 9

Doug Jackson - 29 minutes ago
Really bad plan. If you need a fence then you may not be paying appropriate attention to your child. Even with a gate somebod... View
Cary Elliot Johnson - 4 hours ago
Claire Lee Koo because its a democracy with varying opinions on an open column. View
Elizabeth Jones - 4 hours ago
I saw the petition but it wasn't clear it was supposed to be a few fenced playgrounds per region. I know being in an older pa... View
Opinion 67

Peter Marshall - 35 minutes ago
Wayne Martin the long term effects of the polio vaccine aren't known. Everyone might drop dead seventy years after receiving... View
Wayne Martin - 46 minutes ago
Argo Jones and how is that when it hasnt been fully trialed and the long term after efects are unknown View
TimboinOz - 56 minutes ago
But they are NOT taking just 'their chances' they are behaving as if they are more important than anyone else. View
Lifestyle 2

Peta-Rene Prior - 3 hours ago
All kids should go to boarding schools?? Perhaps get all kids attending school to start with. View
Stas Idowu - 3 hours ago
Synergy Group View
Lifestyle 8

kenbehrens - 5 hours ago
Isn't bringing forward future infrustructure builds going to create a construction vacuum down the track? The other issue of... View
shannos - 5 hours ago
Exactly, investors chasing capital gains and creating a self -sustaining ponzi growth model at the expense of our younger gen... View
shannos - 6 hours ago
Too much emphasis on infrastructure and construction which is cyclic transient employment relying on developers growth model.... View
Lifestyle 11

John Moulis - 6 hours ago
A camera was affixed to the beacon on Mount Ainslie when construction of new Parliament house started in 1980. It took one ph... View
News 18

Clarence Beale - 7 hours ago
Hi Myra, so so sorry to hear about this. They will definitely look after you with a refund or a credit. If they haven’t alr... View
show more show less
*Results are based on activity within last 7 days

A freak accident at Kambah Adventure Playground last month saw a 14-year-old girl airlifted to Westmead Hospital in Sydney with...
Best of Canberra 232

It's a conundrum faced by nearly every parent at some point. You're on your own, feeding the baby and that's...
Opinion 67

Harden’s home-grown girl has rural health at her heart

@the_riotact @The_RiotACT
They may not be haute cuisine, but #local cookbooks are full of treasured family #recipes for everything from apple cake to homemade Irish liqueur. What's on your shelves? https://t.co/nHni3nSBrk (27 minutes ago)

@the_riotact @The_RiotACT
Tributes have flowed for Andrew #Prowse, who began the annual Santa Speedo Shuffle with his wife Heidi to raise funds and awareness of #cystic fibrosis https://t.co/KlEd8k60GD (1 hour ago)

@the_riotact @The_RiotACT
#Apprenticeship growth in the ACT is the slowest in the country, and the Opposition and #industry leaders are calling on the Barr Government to do more https://t.co/VOy53VsEdS (2 hours ago)