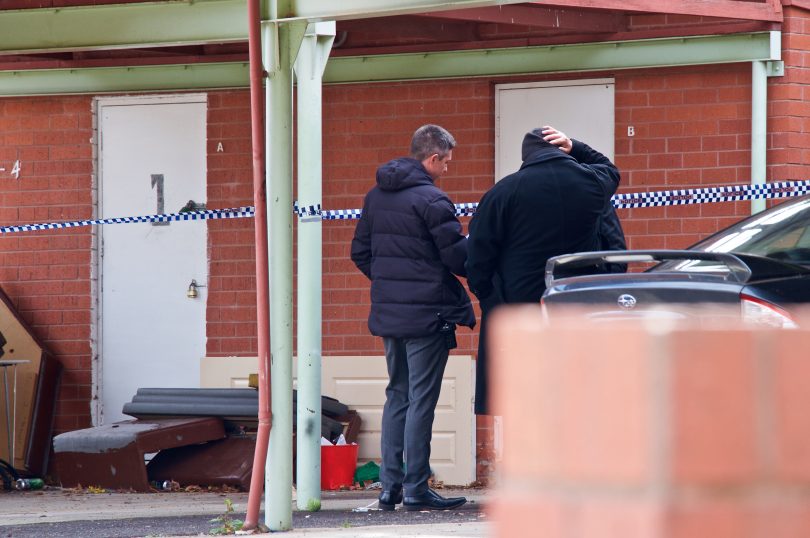 UPDATED 12:20 pm: A boy has been charged with murdering a man in Phillip when he was 12 years old.

Glenn Walewicz was shot on the doorstep of his Mansfield Place townhouse on 10 June 2021, shortly after one or more people knocked on his door.

The now 13-year-old boy appeared in the ACT Children’s Court on Thursday (16 June) where Magistrate Jane Campbell formally charged him with murdering the 48-year-old between 8 June and 12 June 2021.

He was also charged with attempting to enter the townhouse as a trespasser with the intent to commit an offence along with an 18-year-old who has also been charged with murder, and Gary Taylor on 10 June 2021.

The arrests started with 19-year-old Dunlop man Reatile Ncube who was charged with being an accessory (after the fact) to murder.

The 18-year-old teen was the first to be charged with murder and is legally unable to be named as he was 17 at the time of the shooting.

Next, 38-year-old Nicole Williams from Holt was charged with assisting the 18-year-old and others to avoid arrest, as well as conspiracy to commit an aggravated burglary.

Mr Taylor, a 24-year-old from Baradine in NSW, was arrested last week and also charged with murder.

None of these latter four have entered pleas and all four have been remanded in custody.

8 am: A 13-year-old boy has been arrested in relation to the alleged murder of Phillip man Glenn Walewicz.

The Moncrieff teen was with his mother when they went to City Police Station yesterday (Wednesday, 15 June), where he was arrested by a homicide detective.

Although he is the fifth arrest relating to Mr Walewicz’s death, he is the third person to be charged with murder (joint commission).

He has also been charged with attempted aggravated burglary and will face the ACT Children’s Court today (Thursday, 16 June).