2015 ACT Australians of the Year announced 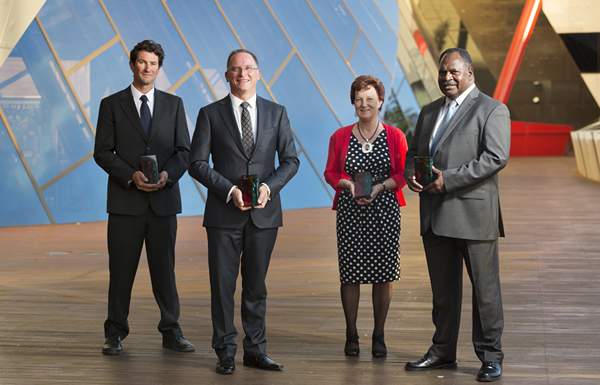 “Each year the Australian of the Year Awards shine a light on individuals who have gone above and beyond to contribute to both our local Canberra community and to Australia more broadly,” the Chief Minister said.

“The finalists for the 2015 Awards have stood out among many outstanding nominees in the ACT. They come from a range of different fields and have each shown great resilience, leadership, hard work and dedication. They set a very high standard for others to aspire to.”

The 2015 ACT Australian of the Year award winners and finalists are:

ACT Australian of the Year awarded to Glenn Keys for his work as a business and philanthropic leader in the ACT.

Glenn Keys is the Managing Director of global healthcare provider Aspen Medical, where he puts corporate social responsibility at the heart of his business. Glenn is also the Chairman of Special Olympics ACT, an inaugural Board Member of the National Disability Insurance Agency and an active member of the Canberra Business Chamber.

Finalists for the ACT Australian of the Year were:

ACT Senior Australian of the Year awarded to Sandra Mahlberg for her work as a humanitarian and volunteer in the ACT.

Sandra Mahlberg is the ACT Coordinator for Rotary Oceania Medical Aid for Children, which is a volunteer organisation helping children from developing countries afflicted with severe medical conditions. Sandra is also a full time nurse at Calvary Hospital.

Finalists for the ACT Senior Australian of the Year were:

ACT Young Australian of the Year awarded to Patrick Mills for his work promoting Indigenous heritage.

Patrick “Patty” Mills is the first Indigenous Australian to win the most sought-after award in global basketball after winning an NBA Championship with the San Antonio Spurs in 2014. Patty is also working to promote his Indigenous heritage in a documentary that showcases the culture and traditions of his people.

Finalists for the ACT Young Australian of the Year were:

Damian De Marco has spent four decades fighting to prevent children sharing his experience after his was sexually assaulted by a Marist Brother in the 1980s. Damian has bravely appeared before the Royal Commission into Institutional Responses to Child Sexual Abuse to contribute to a new understanding of the grave errors of the past and how to prevent them from occurring in the future.

Finalists for the ACT Local Hero Award were:

“It is a huge honour to participate in the ACT portion of the Australia Day 2015 program and to work closely with the National Australia Day Council and all sponsors to recognise remarkable members of our society,” the Chief Minister said.

“On behalf of the ACT Government and the Canberra community, I’d like to congratulate and thank all the finalists, especially this year’s winners for their outstanding contribution to our city and to the wider Australian community,” the Chief Minister concluded.

The ACT award recipients will join recipients from the other States and Territories as finalists for the national awards to be announced on Australia Day Eve, as part of the Australia Day celebrations in January 2015.

Glenn Keys was interviewed on Lateline last night by Anna Alberici who was, as usual, “looking for the fifth leg on the cat” as to why the government awarded a contract to Aspen to treat Ebola victims in West Africa rather than send government employees.
If only she had done some research she would not have ended up looking very stupid.
This was the first time I have seen Glenn Keys speak at length and I was very impressed.
He is an excellent choice for ACT Australian of the year.
Well done Katy Gallagher.

Kalo Arepo - 14 hours ago
Were they trying to jump the queue? View
Smackbang - 23 hours ago
How about you stop passing judgement on someone you know precisely nothing about? View
Community 15